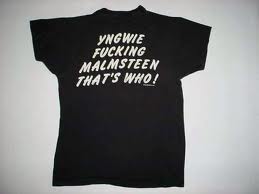 The doors of the Phoenix Concert Theatre opened a little later than scheduled leaving an enormous crowd lining the sidewalk of Sherbourne St. in Toronto, buzzing with the anticipation of seeing guitar legend Yngwie J. Malmsteen. I had overheard one of the doormen say it had taken longer than anticipated to load in and set up Yngwie’s thirty seven Marshall amps hence the almost hour long delay to get inside. The crowd didn’t seem to mind the delay. It was one of the first nights we’ve had that wasn’t bitterly cold in this unusually late spring in southern Ontario, so standing outside wasn’t too painful at all.
The crowd, although lacking gender diversity, spanned many decades in age. The teenagers and twenty something’s represented the eighties in fine form. Long hair, old school concert shirts and jackets, high tops and skinny jeans were in abundance. The energy was high as the doors opened and the night got underway. 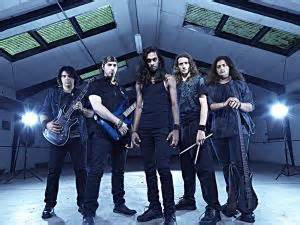 Taking the stage first was a young thrash band out of New York City. Martyrd is a high energy,  retro-thrash band with great stage presence. The singer (although a little screamy for my taste) had a great look with waist length hair that he had clearly honed as his secondary instrument. The hair solos were phenomenal!!! Martyrd is a little on the heavy side for me but definitely talented and tight.

The Phoenix is a great spot to see a show. The stage is a decent size, the sound is usually good and there isn’t a bad place to stand.  It’s a great place to people watch in between bands and tonight was no exception. I was loving the old school eighties style resurgence and amazed that the kids can (and more to the point want to) pull it off today. It was cool to see! My favorite person to watch (and that may be because he walked past us at least twenty seven times) was the guy we dubbed “Trinity”. He looked like he stepped right out of the Matrix movie. I’m not quite sure where one would even purchase a coat like that but it was most impressive. I would have asked but he looked a little preoccupied with taking himself far too seriously.
Anyway…
Second on the bill was The Ethan Brosh Band, taking the stage before the legendary Yngwie J. Malmsteen. Ethan Brosh has three bands. A vocal band (Angels of Babylon), an instrumental  band and a Bon Jovi Tribute band (Living On a Bad Name). Performing tonight and for the first half of the tour was the instrumental band. I don’t think they had been on stage for more than thirty seconds before I knew they were something great! 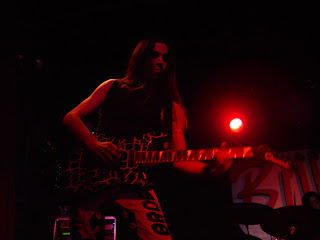 Ethan Brosh is an incredibly talented, technically savvy, guitar maestro!  His sound is very retro, and reminiscent of the awesome technical skills of Vinnie Moore which took me back to a great place and time in my music archives. After an incredible set (although far too short), Ethan invited fans to come and chat with the band at the merchandise booth which I was eager to do as I had, in the last thirty minutes, become a huge fan. Ethan and his sister Nili  (rhythm guitarist) were genuinely happy to meet and talk to fans. I overheard Nili say that she had played with Tony MacAlpine, Impressive!!
Ethan was very humble, soft spoken and seemingly without ego. Surprising and somewhat refreshing for someone so young with so much talent. We chatted for a few minutes and before retuning to the concert hall, I purchased their newest CD “Live the Dream” which has been on repeat in my car ever since. 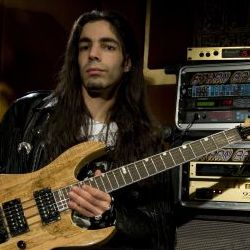 You can check out Ethan on his YouTube channel at www.youtube.com/ethanbrosh.

The lights went out, the smoke started billowing and that unmistakable shredding guitar sound came pumping through the speakers louder than life!  The show opener was “Rising Force”. A great choice I must say!! As I looked to see who was belting out this awesome song I was instantly in shock and awe. None other than Trinity! Straight out of the Matrix and onto stage left behind the keyboard. Cool! I guess he’s entitled to take himself a little seriously. His voice was killer!! I’m a huge Jeff Scott Soto fan so I was prepared to be a little critical and instead was thoroughly impressed.
The singing was split between the keyboardist (Nick Marino) and the bass player (Ralph Ciavolino). Both were outstanding.  I was under the impression that Tim “Ripper” Owens was still singing for YJM but while at the merchandise counter had learned he was no longer with the group. The guy in front of me picked up a CD and asked “is this the one with the Ripper on it?” and the kid behind the counter replied “I don’t know, I’m not a fan of that guy, my Dad is way better!” Intrigued as I was, I had to ask. “Who’s your Dad?”. “Ralph Ciavolino” he replied. “He’s the bass player and lead singer”. (Not entirely accurate but close enough and nice to see a kid so proud of his Dad.)
About four songs into the set, the bass player donned a Canadian hockey jersey (YAY!!!). He wore it for the remainder of the set which must have been smoking hot as he, the keyboardist and drummer were crammed into slightly more than a quarter of the stage while the other three quarters was owned by the mighty Yngwie surrounded by his temple of Marshall stacks. (Did I mention there were thirty seven?) The band were tight but difficult to hear as the mix was over the top heavy on Yngwie. (About the same ratio as the stage placement) 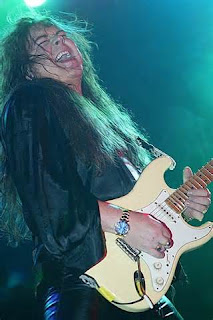 The set ended with my least favorite YJM song of all time. “Heaven Tonight”. Really?!?!
Ugh!!! Now it’s stuck in my head.  I can’t believe he even wants to do that song.
I’d tried to block out that they even tried to make that terrible foray into the Glam Metal scene! That could be why Odyssey was the last YJM album I bought. I didn’t recognize much material past 1988 as by that time I had, shall we say, moved on.
I turned to my friend Kevin and said ” Malmteen’s great but I really dig that Ethan Brosh Band”. “Absolutely” he said, “He’s like Malmsteen but without all the attitude!”  Well said Kev, well said!
Malmsteen came back out and did a two song encore. “Black Star” which I found completely underwhelming and then, just as I was about to completely lose interest, they broke into  “I’ll See the Light Tonight” for the final number.” Marching Out” was probably my favorite album released in 1985 so I was stoked. What a great way to end the show.
The “back up” band were fantastic and deserved much appreciation and respect although they, at no time, received any props, nor even an introduction from YJM. (Thank goodness for Wikipedia!).  Not a surprise, merely an observation.  It is, after all, all about Yngwie right?
The guitar tech was on stage for the entire show. Between the seventy five plus pick strips that needed replacing on what seemed like a minutely basis, the spinning, tossing and general vandalizing of the huge inventory of guitars, the fans trying to touch the “Maestro” and his gear, the tech looked as though he was nearing a complete nervous breakdown by the time the show was done.
There were a few technical glitches (it was only the third night of the tour). At one point in the show, the bassist tried to fill dead air time by telling REALLY bad jokes. Awkward!!!!! To make it just a little more awkward, more than once, when he reached the punch line, YJM broke into a test riff or a power chord just in time to cut him off (seemingly unintentional although we are talking about YJM so was it…really?!) 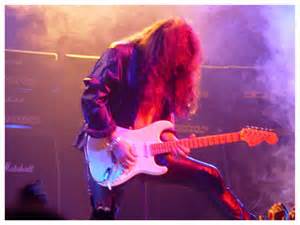 All that being said, there is no doubt that Yngwie was outstanding!! Of course he was, he’s Yngwie J. Malmsteen!  Would you expect anything less?