3 Guitarists You Should See B4 You Die!

As a teenager in the 80’s I was able to see some of the best six string slingers do their thing live. When it’s good its real good, when its great its awesome, but sometimes your lucky enough to see a guitar player so good that they take you on a journey. As David Lee Roth has said “Aint nothin like it in the whole world!”

So in tribute to all the metal shredders and riffmasters out there I have composed my list of 3 Guitar Masters that should be seen LIVE. This is not a list of the most technically proficient, the fastest shredders or the classically trained guitarists but 3 guitarists that at some point plugged in their axe and “melted my face” with guitar playing that touched my soul. and rocked me to the core.

So here we go, in no particular order… 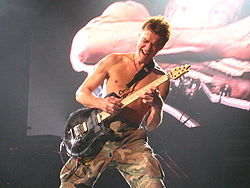 Up first, many would argue the greatest guitarist of all time Eddie Van Halen. I got into Van Halen around the 1984 album and no sooner did I become a big fan than David Lee Roth was outof the band. At the time it was hard not to choose sides in that ugly divorce, in fact Van Halen almost demanded it.

I proudly choose the DLR camp and stand by that decision as “Eat em and Smile” and “Skyscraper” were in my opinion classic fun-time DLR at his finest. Van Hagar was a great band no doubt, but to me they lacked the piss and vinegar that Diamond Dave brought to the mix.

Anyways I finally got to see Van Halen on the 2006 “reunion” tour when it rolled into Toronto and in a word WOW! I knew he was a legend but nothing prepares you for Mr. Van Halen live and how he can make that guitar talk. The songs were tight as hell yet felt loose and fun and he looked to be having a great time on stage. (It was early on the tour) His solo was so solid but most importantly so melodic and musical it was beautiful. 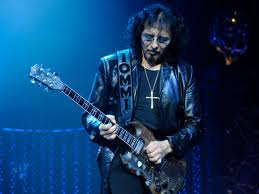 Next up we have The Riffmaster himself Tony Iommi. Now let me first say that I love Sabbath but unlike most metalheads I am more partial to the Dio era Sabbath when I felt Tony kicked up his game even more. So when Dio rejoined Iommi and the boys for “Heaven and Hell” I was as excited as a 12 year old at Christmas.

My incredible wife scored me great tickets to see Heaven and Hell/Alice Cooper and Queensryche in Hamilton On. I am a huge Dio fan, in fact, to me he was the greatest heavy metal singer ever and I had seen Dio perform many times over the years, but on this night I was transfixed on Mr. Iommi. Something about the sounds that he produced was almost hypnotizing. The crunchiness of his attack you could actually feel. It truly was an experience I will never forget.

Last on my list is absolutely my favorite guitar player. This choice may raise a few eyebrows and even elicit a few “Really?’s”. In my opinion Traci Guns is far and away the God of Guitar.

I first witnessed Traci live when LA Guns opened for AC/DC on the Blow Up Your Video tour. This was just after LA Guns had released their debut album. Opening for AC/DC can’t be an easy task but I left with an LA Guns t-shirt, a Traci guitar pick that I caught  and had instantly become a lifer at the Church of Traci Guns.

The Cocked and Loaded Tour, they played a large club in Toronto. I was right up front inches from Traci’s shredding fingers. The show was the most intense, raw and insane concert I have ever seen and still is to this day.

Since then I have been able to see Tracii play three more times. Once with Paul Black, once with Jizzy Pearl and I was one of the lucky few that got to see him play with Dilana. Each and every time Traci hits the stage he seems to become one with his guitar. His playing is so effortless and most importantly, he seems to be having a blast on stage.

So there it is “My 3 Guitarists to See before you Die” list. Agree? Disagree? it’s a all good. Who makes your list?