Share on facebook
Facebook
Share on twitter
Twitter
Share on linkedin
LinkedIn
Share on whatsapp
WhatsApp
Share on telegram
Telegram
Share on email
Email
Share on print
Print
For the past 24 hours there’s been a firestorm of emotion amongst the ranks of the KISS Army. Fans are ‘Shouting Out Loud’ and taking to facebook, twitter, and various message boards to express themselves.
Unfortunately, this is not the KISS Army you are used to. Yes, the ragtag group of fans (myself included) that have stood by and defended Gene Simmons, Paul Stanley and company have truly had it ‘up to here’ with the greasepainted superheroes due to the recent announcement of the pricing for their newest piece of merchandise, the Monster photo book. 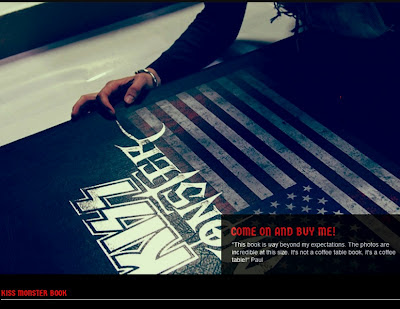 KISS has been teasing this book for the past couple of months by showing photos of some of the pages being reviewed for approval. It was clear that this book was going to be of mammoth proportions but no one could have predicted that the price would surpass it.
Speculation abounded on KISS fan message boards and facebook groups about what the price of this monstrosity would be as well as what practical purpose it served. Speaking as a KISS nerd myself, I love books about KISS and the band’s visual appeal is a no-brainer for a cool photo book but the reality among many KISS fans is that we would much rather have a book that includes more talk and less visual sizzle. I, personally, had been much more excited for the release of  Nothin’ to Lose; a book that veteran KISS biographer Ken Sharp had been putting together with the band but that book appears to have been shelved as it now has a release date on Amazon of July 14th…..2014. So, Monster is what we get.
And what do we get with Monster? According to the official website (www.kissmonsterbook.com) , you get a book that is three feet tall and two and half feet wide. The book has been rumored to weigh in the neighborhood of 50-70 pounds but I can’t seem to find anything set in stone but suffice it to say, if your wife doesn’t kill you for purchasing this product, you’ll certainly get a hernia from trying to lift it.
I’ve purposely avoided mentioning what the price is for this forest-killer in order to give you a few minutes to laugh before going into cardiac arrest. Go ahead, get your affairs in order and tell your wife and kids goodbye because you’re about to go ‘one step beyond’ when I tell you what KISS expects you to pay for a love seat-sized book of concert photographs………..$4299.00!
No, I did not misplace a decimal. Gene, Paul (and their accountants) want you to get out the proverbial KY Jelly and grease up for a Demon/Starchild fleecing. But wait! There’s a special Pre-Launch price of $3499.00. And did I mention Free Shipping? That should make all the difference right? Wrong.
If you’re still alive to read this, I want to tell you that us KISS fans are a forgiving bunch. We will be willing to let KISS be KISS in the marketing world as they trot out one ridiculous trademarked piece of merchandise after another and vote with our wallets to not support such things. In fact, the vast majority of the stuff that KISS put out is not anything that I would personally buy but I (and many others) have no problem with them fulfilling the wishes of the fans that DO enjoy that stuff.  But who wished for this book?
Here’s my conspiracy theory *puts on Jesse Ventura mask*. A few years ago Gene Simmons started showing up on talk shows and in newspapers hawking the newest piece of Kissobilia; the KISS Kasket. This bed for the dead was emblazoned with KISS logo and photos of the group in makeup. Simmons harped on about how it was not a morbid purchase as it was water-tight and could be used as a KISS Kooler to keep your beverages cold while you are still above ground.

This had all the trappings of a classic publicity stunt and, while it was a real item (the band released an updated version last year and Pantera guitarist Dimebag Darrell was buried in one of the originals), I don’t think KISS actually expected any wide-raging sales from the item. It boiled down to a convenient way for KISS to get their name out there during a time when a new album was years away and they were in the middle of a ho-hum (in the media’s eyes; not mine) touring cycle that saw them running purely off of nostalgia.

Is history repeating itself? Could Gene, Paul, and the rest of the gang be banking on this massive book getting enough media attention to help draw more eyes and ears to their upcoming tour with Motley Crue and, later in the year, the Monster album release? Well, if that’s the case they have finally bitten off more than they can chew with the fans.
KISS fans no doubt were embarrassed by the whole Kasket ordeal but we laughed it off as a gimmick and, really, how many of us ever seriously considered buying one of those things?
But the Monster book is a different beast altogether. This is a KISS product that is directly related to what they do best; provide the most amazing stage show in all of rock and roll (at least they used to). A giant book filled with tons of photos of the bands full career certainly piqued the interest of many of us and it has nothing to do with any tie-ins to Family Guy or Hello Kitty. But what about the price?
Fans have been speculating for the past few weeks about what this cool new book was going to cost. A poll was even set up on popular KISS fan site KISSFAQ.com. Among the hundreds of votes, the most popular guess seemed to be in the $500-600 neighborhood; an astounding price for a photo book but nothing too shocking for a KISS fan.  But $4299.00?
I almost forgot to mention that KISS is also offering ten different versions of the book featuring flags of ten different countries. While this seems like a nod to some of the bands biggest supporters from around the globe, it reeks to this writer of some very rich and famous opportunists targeting the completist collectors that have to have everything. It feels like the equivalent of a crack dealer offering different variants of dope to a junkie. 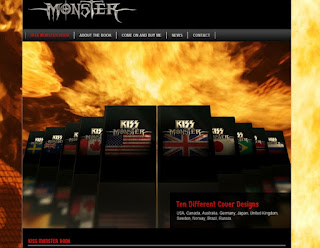 Since the price of this product has been released, KISS fans have spoken loud and clear and it appears that the feedback is negative across the board. The devoted soldiers in the KISS Army, for the most part, are truly outraged at what they feel is a slap in the face to their fandom.
One KISS fan on the KISSFAQ board responded sarcastically by asking “Should I buy the plain cover, the American cover, punch myself in the abdomen, or buy the UK cover?”
Another die-hard on the KISSFAQ board eloquently stated, “I’m a rose colored glasses-wearin(g) sheep but that’s frickin insane. The first 3 cars I owned didn’t cost me that much. I think I’ll pass.”

A fellow KISS fan friend of mine on facebook stated in a status update, “KISS says…”We hear and we obey”…Finally they have listened…I have been wanting a 7 foot book that weighs 300 pounds and costs as much as 17 payments on my Kia. KISS nailed it exactly!” While there is some exaggeration going on there, you get the point.

Having the media poke fun at you but still giving you enough press to sell a few extra tickets to casual rock fans may be an acceptable practice in the world of KISS Inc. Scaling the heights of ridiculousness like they have this week may have done some long-term damage with their diehards though.

As I said before, many hardcore fans (myself included) can look the other way while our costumed crusaders pad their bank account as long as we get some great music and fun concerts in exchange. That’s really all that they owe us. But, in truth, I wonder if they care much at all about those of us that have been supportive of the band through different eras, different members, and drastically changing circumstances (including death). Or, are we just wallets with a pulse?

I can only hope that the upcoming Monster album release will take away some of the cynicism. Until then, don’t forget to balance your checkbook guys.