AC/DC GETS TOO TOO TOUCHY 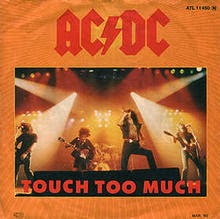 A couple week’s back the Decibel Geek Podcast was reliving the “BEST OF BONN SCOTT”, lead singer of Aussie Rock Gods AC/DC, and the ‘Original’ BAD BOY!! During Bonn’s short, but hit filled stint with the Aussie Lads, he recorded several songs that would later become future ‘blue prints’ for how to construct timeless, bad-ass rock and roll. During this week of tribute, we focused on favorite songs, and songs that well, just rocked and ROCKED HARD.

‘Touch Too Much’ is on the last AC/DC with Bonn Scott ‘Highway To Hell’, which was released in 1979. This was the album that featured the vocal styling a of Scott, who died the following year. But it was this album, that set the guys on the way to further fame and triple size worldwide fan base.
This not your average AC/DC song. This song has POWER!  From the first guitar strum, and first set of lyrics, you know this song is going to be one WILD RIDE. Let me explain. In the lyrics you pretty much figure Bonn’s out being a typical male, and he’s trying to scratch on somethin. From the strum of the guitars and bass, you can also tell, this chick is not any ordinary chick. 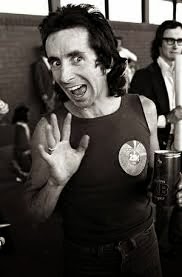 Well, Angus Young has always been a power charge for the guys, but on this song, it seems to be an “all out effort!” The song starts out strong, with Angus and Malcolm Young and bass player Cliff Williams getting the dirty vibe started. These three together are like three seasoned generals going to war, they’re prepared for anything and everything. The rhythm section on this song is so strong, you feel it pulsate thru your veins as it mixes within the bloodstream. It should be illegal how the guys mixed everything together. Soon, you hear the snarl of Bonn’s Scottish voice as he begins to make his plea for the affection and touch he longs for from the woman of his affections.
When you listen to it, it sounds like Bonn is making a plea for this woman and her…well sexiness to hurry up and “touch” him. But it sounds like after a few bars in that Bonn has decided that he can’t handle her or her sex appeal…I’M GUESSING…but knowing who is singing this song, it’s probably a safe bet to say, but again, I’m only guessing on this. 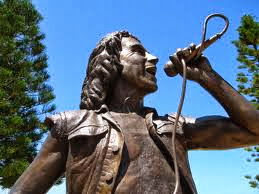 Bonn’s raspy vocals with the Young brothers guitar work definitely make the song not only enjoyable, but as always ,they add a extra grit and grime to the song. This was, and still is one of AC/DC’s many hidden gems. It really didn’t catch on when the album came out, but now, because of next generation fans and the joy of the internet music stations (such as Decibel Geek Podcasts), this song, like 80% of AC/DC musical catalog has new life. One thing can be said about AC/DC and Bonn Scott that still holds true today…THE GUYS CAME TO ROCK AND THEY ROCKED BALLS OUT, GO HARD, NO SURVIVORS!!!
Bonn Scott’s death was way too soon. He created a legacy for not just AC/DC, but those that came after him. There’s no telling what else Bonn was capable of, what other records would the guys have shattered with Scott’s styling? One thing is for sure, BONN SCOTT helped take AC/DC TO THE NEXT LEVEL OF ROCK. HELL HE WAS HARD ROCK, AND TAUGHT ALOT OF US JUST HOW LONG OF A WAY IT IS, IF WE WANNA ROCK N ROLL.
RIP BONN SCOTT, AND THANK U FOR ROCKIN FUTURE GENERATIONS!!!!!