Sometime ago, well before I joined the ranks of the Decibel Geek, I had one of those rare moments where I actually had the radio on, probably had some friends over and chose not to subject them to any “Meister Music” as they all call it….I’m on an island alone out here…lol.  In any case, a song came on by Australian rockers Airbourne, Blond, Bad & Beautiful.  I was shocked, something in the way of new music that I actually liked being played on the radio! I searched the band, subsequently purchased the CD, No Guts, No Glory and shortly thereafter their other self-titled release as well.  I was loving their obviously fellow countrymen AC/DC inspired sound and straight balls out rock. 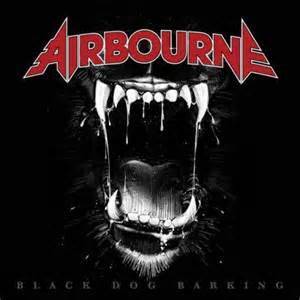 Airbourne is set to unleash a new collection of blazing in your face rockers called Black Dog Barking, which was streaming on line for a short time, but I seem to have missed it….damn!  Now I’ll have to wait until the CD gets released on May 21st, 2013.  Until then, I was able to get a good Airbourne fix at the show Wednesday May 15th, 2013 in Toronto.  I arrived at Lee’s Palace on Bloor Street in Toronto thinking that this was a new venue on my radar, but once I got inside I realised that I had been here once before years ago to see alternative band The Catherine Wheel.  After looking around I fully believe that there has been no maintenance done on the place since that show back in the 90’s!  I chose a spot to the right side of the stage just up from the floor, keeping a watchful eye on the broken and missing ceiling tiles overhead preparing for them to break loose to freedom and come crashing down on my melon.

The place was reasonably packed already and the first act was already on stage when I entered at 9:06pm.  I find this extremely annoying, being someone who enjoys to see the opening bands, that the doors open times are posted at 9pm and the first act begins at the same time, I believe that there should be at least a half an hour delay so that guests lined up may enter and get a beverage before the show.  The Damn Truth was on stage from Montreal Quebec and the female lead vocalist also played guitar.  The band had a good feel to them and the charismatic singer at one point sauntered over to the guitarist and kissed him as he grabbed her ass.  The general volume was quite loud and she had good vocal ranges it seemed to me. Their quick set ended around 9:30pm.

As I looked around at the audience and took another survey of the ceiling tiles overhead I noticed that there were many, many more younger people, girls especially, here than I am used to at the shows of my usual attendance.  I also noticed that the interim music was The Devil Sent You from a favourite band of mine, Rhino Bucket who I just saw for the second year in a row on The Monsters of Rock Cruise.  The crowd was full of Airboune shirts on patrons young and old and there were also a smattering of Bleeker Ridge shirts as well.  Even a Sister Sin shirt caught my eye!  I had not heard of Bleeker Ridge previously, but they seemed to have a bit of a following, so let’s see what they’re all about.

Bleeker Ridge took the stage about 9:50pm and I clued in right away.  They were all younger guys, which explains the population of younger ladies in the audience, no doubt attracted by the boyish looks of the lead vocalist.  They had a heavy, modern and clear sound as many of the crowd were singing along down in front of the stage.  After a few tracks the singer announced that they were Bleeker Ridge from Orillia, Ontario and that they had played in Montreal with Airbourne the previous night as well.  The next song, he informed us was called Small Town Dead and was about their home town of Orillia and it got the crowd clapping.  I felt a bit left out as I seemed to be the only one around me who didn’t know the song!  They rifled through a few more cuts including 16 Hours, She Said, Last Cigarette (their latest single) and Sleep.  Bleeker has a new CD out June 4th and I’ll certainly be picking it up as they were an enjoyable performance.  I don’t however understand the four young girls that left directly after Bleeker, how could you not at least stay for a bit of Airbourne?

As the stage hands busied themselves with the preparations for the Aussies to hit the stage while another Rhino Bucket song, Beg For Your Love provided the soundtrack, I took notice of the stacks of Marshall amps on the stage.  This was going to be loud for sure!  I was also a little surprised to see that the ceiling was still intact and that the place was basically packed on this mid-week Wednesday…..I suspect more than a few people will be going to work with a big hangover tomorrow!

Around 11pm the lights dimmed and a recorded intro announced that the band would soon take the stage.  The assailment of my eardrums began shortly thereafter although they took it easy on the eyes!  The stage lights had blown, maybe from a loose wire or probably from the sheer volume or thumping bass and drums!  While they sounded great during their opener of Raise The Flag it was 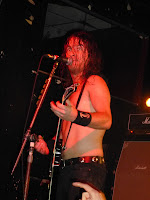 too dark to actually see the Aussies on stage.  About halfway through the track the lights exploded on, causing wincing as I was just starting to get accustomed to the dark.  With a quick glance overhead I immediately surveyed the ceiling to make sure that nothing looked imminently dangerous.  As my eyes adjusted to the now lighted stage, all I could think of was Bon Scott as I looked at Joel O’Keeffe, Airbourne’s singer and lead guitarist.  The whole band kept wetting their hair and shaking it at the crowd, spraying us a bit with the water, which was just a little foreshadow
ing of what was to come. 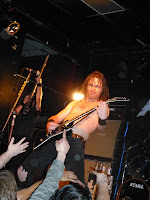 Born To Kill attacked my senses next and along with Joel’s animated throat slash and general facial expressions the only thought that hadn’t been pushed out of my head by the thunder from down under was….holy fuckin’ intense….pardon my language!  The crowd was all a sea of fists pumping in the air and many could be seen singing along as they were jostled about in the whirlpool of moshing throughout the next few tracks of Diamond In The Rough and Blond, Bad & 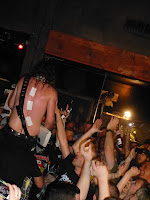 Beautiful.  During Chewin’ The Fat Joel gave us a little show of his stage presence and antics when he took a can of Pabst Blue Ribbon beer and repeatedly smashed it against his head until it broke open in a shower of foamy bad tasting beer, spraying the crowd.  But they were only just getting warmed up with their show as next, during Girls In Black, a tall roadie took Joel O’Keeffe onto his shoulders and piggybacked him around the bar, parting the crowd like the Red Sea and momentarily pausing the mosh pit as they passed through!  Wow, my head was ringing from the sheer volume by now!  I once saw Big Sugar years and years ago and the buzz at the time was that they were the loudest band in the world, but I can honestly say that they have been de-throned!  Joel played a little slide guitar with a wine bottle during Cheap 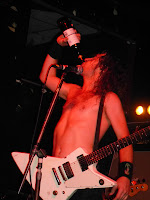 Wine & Cheaper Women before gulping down a couple of swigs and then tossing the 3/4 full bottle out into the crowd for them to share around and guzzle from.  “Our new album Black Dog Barking is out on 21st of May and here’s a song from it now,” Joel screamed into the microphone as they launched into Live It Up (here’s the link to the video for Live It Up: OFFICIAL VIDEO).  “Let’s try something here,” Joel called out after Live It Up.  “Let’s see how many people we can get up on other peoples shoulders.  First one gets a beer!”  Several of the crowd achieved the goal and as promised the first was tossed a beer, open of course and beer was flying everywhere.  They roared through Black Jack next and Joel gave us a short guitar solo before Too Much, Too 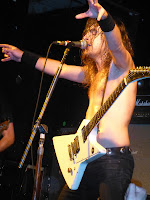 Young, Too Fast, the mosh pit on the floor getting really worked up now.  The stellar Running Wild had the crowd singing along even more than Too Much, Too Young, Too Fast did and I thought I could even hear a little of Black Sabbath’s Paranoid in the mix there.  Running Wild only served to amp Joel up as well (as if he wasn’t already) and he opened another beer can on his head, tossing the remnants into the crowd for someone to guzzle down.  And then another head beer, with a final one being opened by Joel with the pull tab and swigging down some Pabst suds.  The remains of the beer also went into the crowd and I was now rather completely soaked in sweat, water from the band’s hair, cheap beer and a little red wine to top it off, I’ll smell great on the subway home!  The Aussies remained on stage staring out at the crowd.  “You want one more?” Joel asked as they blasted into Stand Up For Rock And Roll for their encore.

And that brought us to the end of Airbourne’s show and what a show it was!  With She’s A Screamer playing through the sound system to complete Rhino Bucket’s triple play, I made my way to the merchandise table and pondered spending money that I should be saving for my trip to Sweden Rock Festival in two weeks.  Awesome show, but everything is muffled and the world has a decided echo to it now!  Airbourne blew me away and was certainly the best show of the year so far for me, just ask Killer Dwarf skin basher and Automan.ca frontman, Darrell Millar who was also in attendance.