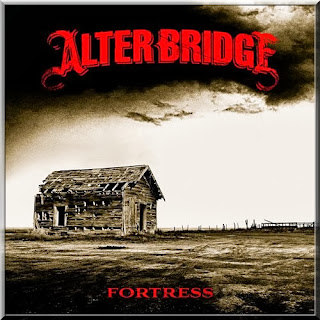 Alter Bridge was formed in 2004 from the ashes of what was known as Creed.  Creed came on the scene in 1997 and although the first album was alittle on the grungy side, they were one of the first of a few bands that turned the music tide from grunge back to hard rock in the late 90’s.  With 3 albums released originally, they got better and better with fans clammering to hear and see this new great rock band Creed. Each album got better and better until the band became so big, that they imploded and dissappeared.

Everyone has read all the stories about how singer Scott Stapp was a prick, arrogant, whatever, and ruined the band at the height of their career.  In 2004, Creed disbanded and the 3 remaining members of Creed; Mark Tremonti, Brian Marshall, and Scott Philips; joined with singer Myles Kennedy and alas, we have Alter Bridge.  Now, I for one Loved Creed. I didn’t care about anything negative that I had heard in the press about Stapp.  I just loved the music.  So I was apprehensive about this new band Alter Bridge.  The first album came out and I remember hearing the first single, Open Your Eyes, and thinking, WOW! This is good. Still sounded a little like Creed’s last album Weathered, which I thought was their best, but the singer, Myles Kennedy sounded awesome.  So I bought the album and slowly started loving this band.

A couple of years later, album 2, Blackbird, bought and loved even more.  Couple of years later, ABIII comes out. I was like, HOLY HELL.  How are they doing this. It was outstanding.  So, fast forward to 2013.  I see the first single, Addicted To Pain posted to their facebook page.  So, naturally, I hit the little play button. My god!!! What I heard was the heaviest riffs I had ever heard Tremonti play on an Alter Bridge album.  Note, I had bought Tremonti’s solo album last year, and it borders on full blown metal, which I would never classify Creed or Alter Bridge as.  But, the boy can play his ass off.  So I am so excited!  Then I see, the album isn’t for release until October.  I was like, damn.  I have to wait.  So here it is folks.  Alter Bridge’s Fortress album is upon us, and oh what a ride it has been listening to this album.

Track 1. Cry Of Achilles. I hit play and heard this acoustic little interlude going on with little hints of spanish flamenco guitar at the end.  I immediately thought, oops, wrong album.  Then, NO!!! The crunches kick into overdrive and the song goes from 20 to 90 miles per hour in about 3 seconds flat.  My head instantly started bobbing uncontrollably and the race was on.  As I was at work listening to this with my Ipod, people see me headbanging all day long. But never continuously, without braking, for 8 hours straight. So, track 2. Addicted to Pain.  Most bands nowadays release their best song first for some odd reason.  But Alter Bridge is not the normal band.  This song is a fast paced, catchy chorus monster of a song, tha’ts doesn’t even let you breathe.

Basically, I ended up listening to this whole album on repeat for about 6 hours straight. And guess what folks.  I didn’t get tired of it, or skip any of the tracks.  Which tells me, that this album is a masterpiece.  I’ve told people about it and all I get is, “I hate Creed!”  They aren’t even giving this a chance.  And that is so sad about so called music lovers nowadays.  This album is incredible.  I’ve heard every album that has been released this year, and hands down, this is the BEST album so far this year!!!  I know Alter Bridge is not what some people want to call Metal, but it’s closer than they’ve come before, and this is what I would call Heavy Rockin Ass music.  So, if you love Alter Bridge, this will not dissapoint you.  If your not sure about them, and hold Creed against them, fucking get over it and buy this shit.  ALTER BRIDGE IS NOT CREED PEOPLE!  Get real and grow up.

Peace Is Broken is the best song in my opinion.

Cry Of Achilles is an awesome heavy rocker that kicks in and doesn’t let up until the last note.
Addicted To Pain is another great track that will make you head bang till your neck is whiplashed.
Basically, this whole album justs kills.  If this was 1987 or 1988, this album would have blown Bon Jovi off the face of the planet.  Too bad radio doesn’t give a shit about trying to make or break a band anymore.  This has so many top ten singles on it, it would have made them gods back in the good ol days.  But, oh well.  That was then, this is now.  Buy this album, go see them live when  they come to your area.  You will not regret it at all.  I promise you that.  I have seen them and they are one of the best live bands around lately.  This album is so good, I don’t know how they can do any better for their next one.  They may as well just break up after this.  But we will just have to wait and see!!!!

In closing, I am proud to call myself an Alter Bridge fan.  I truly believe in hardcore fans totally supporting their bands.  So support Alter Bridge.  They are REAL, and they are all great guys and deserve all the love and adoration that they get.