New Wave of British Heavy Metal pioneers Diamond Head may not be a total household name like Metallica or Megadeth whom they had a huge influence on during those bands formative years, but they brought the house down in  on Friday April 19th.  The venue, The Hard Luck bar was a new place on my radar screen and I had never been there before.  It was certainly unassuming from the street and had there not been some obvious metal fans and security guys out front I probably would have walked right past it without a second look.  After climbing three flights of stairs, I had no problem securing a ticket at the door and entered the small one room club.  There were a few tables, maybe 8 or 10 clustered around with the merchandise booth on the right hand side and bar on the left.  The stage was behind me as I walked in, perpendicular to the bar/merch table walls.  With only a smattering of rockers in the club I perused the merchandise table and acquired a new t-shirt and Diamond Head’s latest CD, What’s In Your Head? from 2007.  Joining a friend at a small round table, we obtained some beverages and chatted about last week’s U.D.O. concert and debated the suckiness of the opening bands that night.  I quite enjoyed the first band, Axxion, but it appears that I was alone in this thought.  We did both agree however that the second act, was not good at all and that U.D.O. was stellar, up there with the best shows of the year so far. 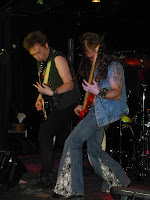 Phantom, a local band was up first and I had no idea what to expect from them.  I was pleasantly surprised as they worked through their set playing original compositions such as In Metal, The Powers That Be, Killing Concubine and Riker’s Beard.  I was digging the grooves of this three man outfit and by the time they got to Blood & Iron, which had a real Maiden feel to it, I had decided that I would purchase their CD if they had one on sale.  My concert going friends also echoed my sentiments, quite enjoying Phantom as well.  I looked around and saw the venue starting to fill in a little more now.  Their catchy riffs getting my head bobbing as I noticed Axxion’s guitarist Shred, drummer Alison Thunderland and vocalist Dirty D Kerr in the audience behind me.  Beyond The Sun was next on the set list and I noticed that the band had a recording of a male speaking in Asian language during the song breaks.  The singer/guitarist 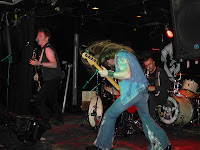 D.D. Murley, had made an earlier reference to “radio free ” and I didn’t get it then, but now I could hear the recording as he made another reference.  I’m not sure what the purpose of it was and it didn’t seem to fit that well, perhaps it was some kind of over broadcast.  Phantom tore into their last song of the assault called Citizen Pain and as they ferociously played, the guitar cut out near the end of the song.  Perhaps a blown amp or something caused this, but in any case the song finished well still and the singer commented on how hard they must have rocked to cut out the guitar like that. 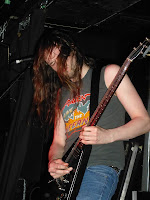 Cauldron was up next, another local band who took to the stage wearing tees such as Raven and Rush.  They erupted into their first track as the crowd tightened up in front of the stage.  Cauldron was heavy and seemed to have an incredible grasp on their instruments and the blistering guitar solos from Ian Chains did not get tiresome.  While vocalist and bass player Jason Decay was phenomenal on the bass, his vocals were a bit weak in my opinion.   I was informed by a concert going friend that Mr Decay was a former member of another Toronto band called Goat Horn.  During one of the short breaks between songs the guitarist, Ian Chains downed a beer and dropped kicked the empty can out into the crowd.  The move backfired a little bit as the can bounced

off his toe sideways and smack into the face of someone in the front of the audience!  After a short pause for a broken bass pedal, the guitarist took the time to apologise to the person who was the recipient of the beer can in the face and they were under way again.  To me it’s obvious that Metallica was a big influence on this band as they smashed through their set list including tracks such as Nitebreaker, Summoned To Succumb, Burning Fortune and Conjure The Mass.  While they have some good head banging riffs and the crowd was surely enjoying it, with a small mosh pit even breaking out, they were not really my style.  They ended their set and the guitarist actually passed his guitar out into the crowd and I watched closely as it crowd surfed around a few minutes before returning to him on the stage. 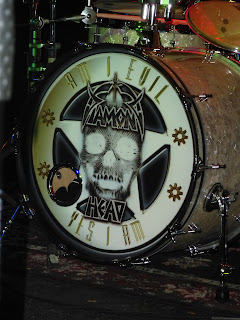 The reason for the evening was next on deck and the crowd was tighter than I have seen at concerts of late as we stood to the right of centre stage planned to be in front of Brian Tatler, the magic behind .  As I looked around I noticed that C.C. Diemond, guitarist for one of my favourite local bands, Diemonds was in the audien
ce as well.  The musicians of  came on stage starting into Play It Loud and lead vocalist Nick Tart, replacement for original crooner Sean Harris joined a few moments later attempting a dramatic entrance with the delay I suppose.  As they ripped into song number two, I Feel No Pain, I was loving the sound!  They were bang on musically, to my untrained and partially deafened due to years of loud Diamond Head ears.  Bassist Eddie Moohan was all smiles, obviously having fun as was Brian Tatler, both occasionally pointing at someone in the audience with my newly acquired diamond head t-shirt getting a thumbs up from both.  By the time they

started into their third cut, Dead Reckoning, I had the thought that this was certainly the most raucous crowd I’ve seen at a show in a long time.  I was surprised at the crowd reaction, but pleased to see that these Brits could still get the crowd going strong, enhancing the possibility of keeping them alive recording and playing.  Come Alive from 2005’s All Will Be Revealed and To Heaven From Hell from 1981’s To Heaven From Hell proved that Nick Tart was a great fit as successor to Sean Harris and his voice was in top form, sounding great on the classic material as well as the newer compositions.  While The Hard Luck Bar was a good place for a small intimate show with good sound, the stage seemed to be too small for the quintet of Englishmen as they navigated around each other.  Diamond Head continued to rip through their set list serving up In The Heat Of The Night and Shoot Out The Lights next, one of my personal favourite Diamond Head cuts.  The crowd kept getting whipped more and more into a frenzy as a small contingent nearby began 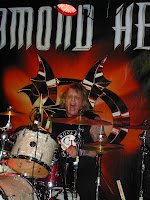 a bit of moshing.  As the pushing surge from behind escalated and it became tougher to hold my position in front of Brian Tatler, I eventually had to “tap out” at the end of Shoot Out The Lights, not because I couldn’t take it but more that I was tired and the surge from behind was slamming my legs against the couple of feet high stage causing bruises on my quads.  I  just didn’t have the energy after a near 60 hour work week to repel the onslaught any longer. I above anyone understand the frenzy of live music, but one thing I can’t stand is people who push their way up front like that, if you want to be up front then get there early and stop being an asshole!! But such is part of concert going and I had to use the facilities and get a beer any ways, plus my two friends had already retreated.  As I hung towards the rear of the crowd, catching It’s Electric and Give It To Me from the great All Will Be Revealed CD, I was watching the odd

person crowd surfing and picked off that one of them was Axxion’s lead singer Dirty D Kerr.  Nick Tart took a second to mention their visit here in 2011 when they played at the Heavy T.O. festival, but I already knew he would mention this as you could see the note circled on the top of the set list positioned by the drum riser.  saved their best or most known songs for the end of the set with Sucking My Love, The Prince and Am I Evil? being the last tracks of the night including encore.  All in all an excellent performance by these Brits and I shake my head that they were/are not a bigger household name.  A huge influence on bands like Metallica, who have openly stated this on many occasions and even covered a number of their songs and I’m told that Dave Mustaine even thanks Brian Tatler in the credits in every album (although I have not verified this) and yet the bright light of huge stardom has tragically not shone more brightly upon . 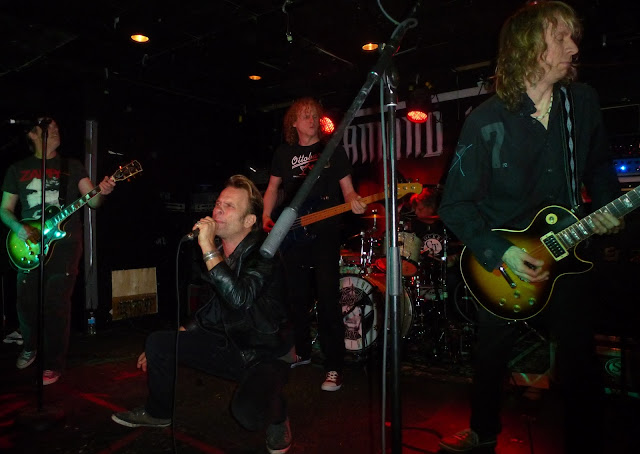 NWOBHM pioneers Diamond Head rolled into Toronto on Friday April 19th and destroyed the Hard Luck Bar in one of the most raucous high energy shows I’ve seen this year and I hope they come back again soon.