…And the Winner is: Red Dragon Cartel! (Award: The Band That Meister Has Seen Live the Most In 2014) 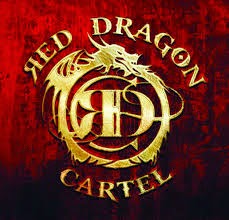 Anyone who knows me knows what a fan of not just hard rock and heavy metal music, but the live concert scene I am.  That being said it’s unavoidable that I would catch a few bands for more than one performance as I hit up concerts in Toronto and festivals around the world as much as work allows throughout the year.  Jake E. Lee‘s Red Dragon Cartel is a band that I’ve seen a whopping six times throughout 2014 and frankly, it’s still not enough!  After all the hoopla surrounding the band’s premiere show front man Darren James Smith has more than proven his vocal prowess around the world, something that I, like Jake E. Lee, knew he would.  A former member of Harem Scarem, Warmachine, Heavens Fire and other Toronto area bands, the Southern Ontario resident has delivered countless top notch performances as the band saw heavy worldwide touring throughout 2014.

Darren not only has to sing the songs from Red Dragon Cartel‘s self-titled album issued earlier this year that he provided vocals for, but has to also sing songs that originally showcased the voices of the likes of Robin Zander and Paul Di’Anno. On top of that he has to pull off the late Ray Gillen‘s Badlands tracks and one of the most well-known voices in rock, Ozzy Osbourne. Not an easy feat!

Jake E. Lee is a guitarist that everyone definitely has to see before they die and now with his Badlands brother Greg Chaisson stepping in for Ronnie Mancuso who returned to his producing, Red Dragon Cartel is still setting the world on fire!  The band seemed to be playing everywhere in 2014 with appearances at Sweden Rock Festival, Monsters of Rock Cruise and M3 Festival and has more gigs planned for 2015.  But on Wednesday December 10, 2014 they rolled into Toronto for the second time this year!

After the stage and crowd at The Garrison was warmed by opening bands Warmachine, a local area band that formerly featured Darren James Smith with a pummeling fast paced set and young guitar wizard Ethan Brosh and his band with their shredding instrumental set, the crowd tightened up for Red Dragon Cartel.  Coming out of the gates ripping, they delivered Ozzy‘s “Ultimate Sin”, of course, co-written by Jake E. Lee.  I captured the track in this video: “The Ultimate Sin”. The band sounded great with Jonas Fairley‘s pounding drums, Greg Chaisson‘s thundering bass and Darren James Smith‘s soaring vocals, but it was, of course, the master Jake E. Lee who stole the show.  “Wasted” from the Red Dragon Cartel self-titled CD, which Paul Di’Anno provided the vocals for on the album was the next selection.  The crowd was clearly loving every minute of the show, but they weren’t the only ones as a broad smile could often be seen to flash across Lee‘s face as he seemingly effortlessly wielded his guitar.  Throughout the evening, we also were served songs like “Shout It Out”, “War Machine”, “Deceived” and “Feeder” (a Robin Zander sung track on the album).  Intermixed with those awesome Red Dragon Cartel songs were some classic Badlands compositions in the form of “High Wire”, “Healer” and “Rumblin’ Train” among others.  One of the absolute highlights for me and one of the earliest rock/metal tracks I ever heard was the encore presentation and show closer of Ozzy’s “Bark At the Moon”. Here’s another video from the event: “Healer”.

Once again, this is the sixth time that I’ve seen Red Dragon Cartel live this year and it’s still not enough!  If you have the chance, don’t miss these guys!