Appetite For The Rocket Queens: A Concert Review 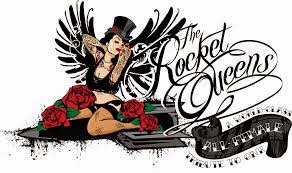 Where were you when you first heard “Welcome To The Jungle”? Do you remember? I do. Guns n’ Roses‘ Appetite For Destruction album had a severe impact on the formative days of my 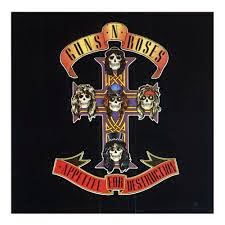 youth and was literally a soundtrack to our after school hours. My childhood friend and I had a hold of the record long before most anyone else had even heard of Guns n’ Roses, before it became a huge smash, before “Sweet Child O’ Mine” became played at every high school dance for years to come. I remember listening to Appetite For Destruction in my friend’s bedroom when we were 13/14 and discussing how we couldn’t play it in front of our parents because of the “f-bombs” (something that kids don’t seem to worry about nearly as much in today’s world) and how this was going to be the band that we would follow through every step of their career. Then the album gained attention and soon everyone had it. The day the Use Your Illusion I & II albums were released my friends and I skipped school and made the trek from our little town into the big city of Toronto to buy them right away. I find those albums, especially Appetite For Destruction hold up just as strong today as they did when they first came out and no one knew about our little secret. 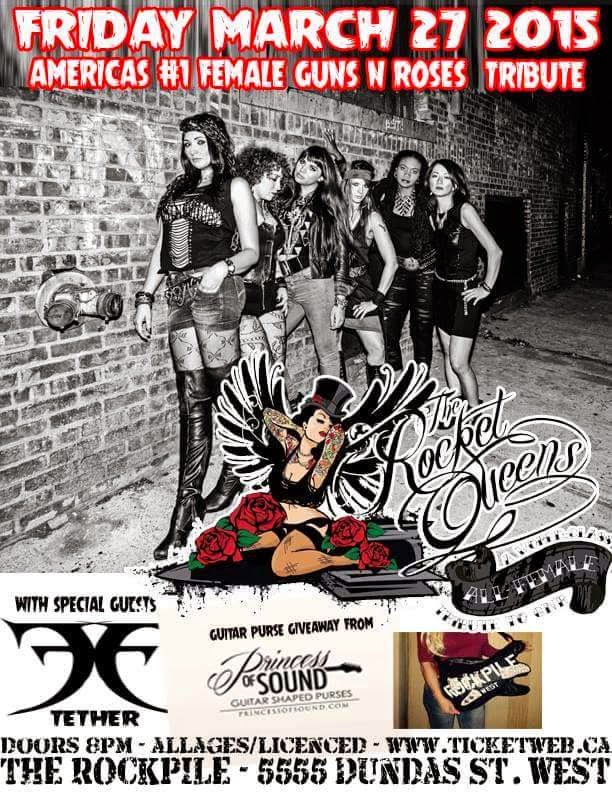 When my favorite club, The Rockpile in Toronto, announced that on Friday March 27th, 2015 America’s #1 All-female G ‘n’ R tribute band, The Rocket Queens would be making the trek up from NYC it only made sense that I be in attendance. If you’ve not experienced The Rockpile, you should make a point to do so. The club has showcased many big name acts here in Toronto and there’s something going on every weekend there. Many friends across the world have said that they “want to move where The Rockpile is” or “I wish we had The Rockpile here” and they’ve never even been to the club! From the extremely personable and “possibly nicest guy ever” owner, to the hard working promoter who brings in the acts, to “one of the best sound men in the business”, right down to the lovely bartenders and friendly (unless you’re acting up) security folk it’s always a pleasure attending an event at The Rockpile. It sure helps in making my 2.5 hr public transit adventures to get there seem much more handle-able! 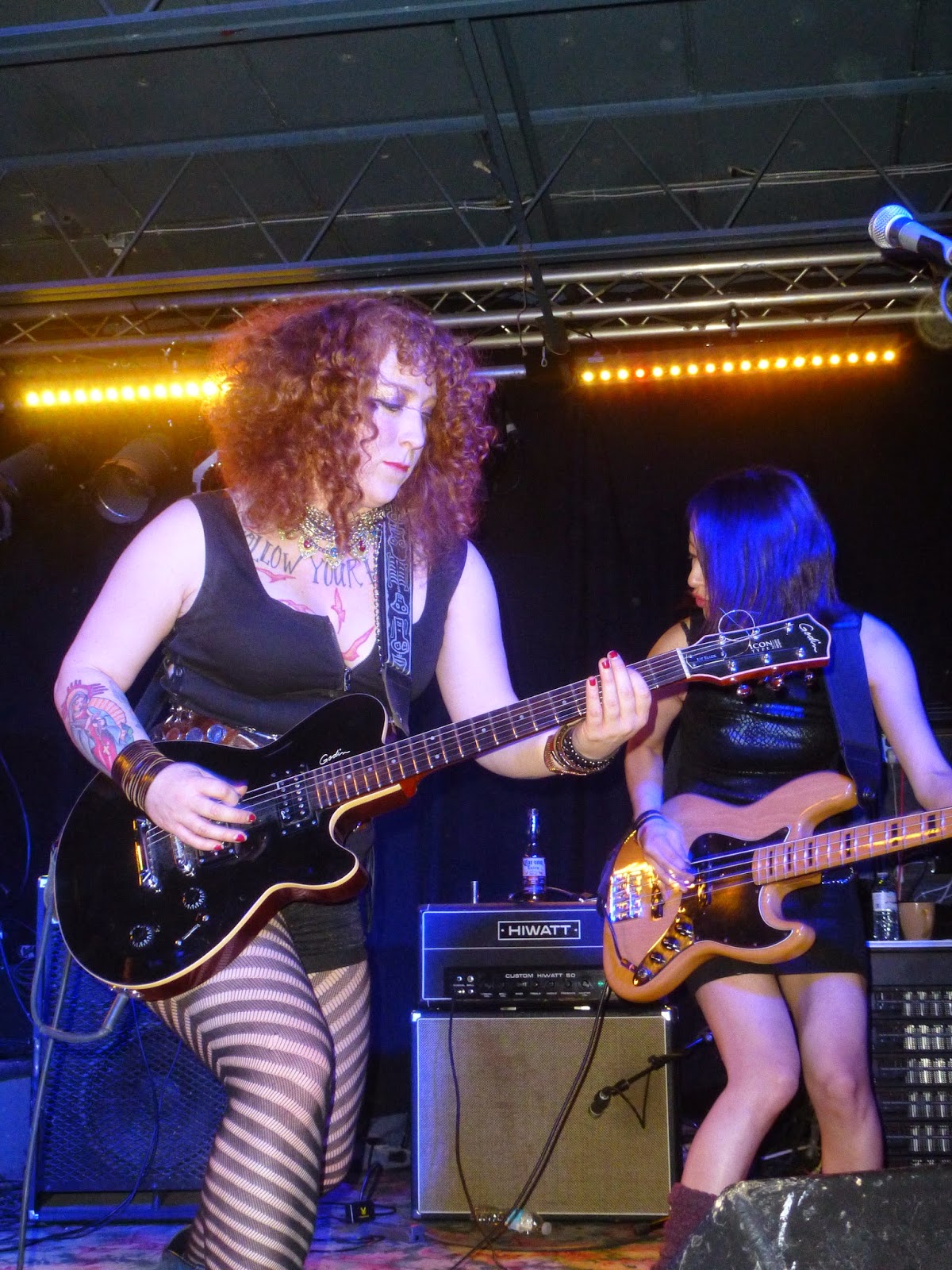 After drinks and chats with The Rockpile owner and friends while the opening two bands warmed up the stage (btw is the friggin’ heat even on here tonight?) it was time for the ladies to take the stage. Not being ones to watch a show from the back of the room or seated positions we swarmed the stage. Announcing that they had driven a long way from NYC to be here and that they were going to play an extra long set tonight, things were off and running with “My Michelle”. Hell, this might even be better than actual Guns n’ Roses, given the attitudes and state of things there! The girls seemed to be having some sound checking issues even though things sounded great out here and guitarist Lily Maase asked us to bear with them momentarily. They were very quickly under way again with “Double Talkin’ Jive” directly followed by “Right Next Door To Hell”. It appeared that they were not an all-female band, as promoted, with a long-haired and thunderous drummer behind the kit, but no matter, all had their 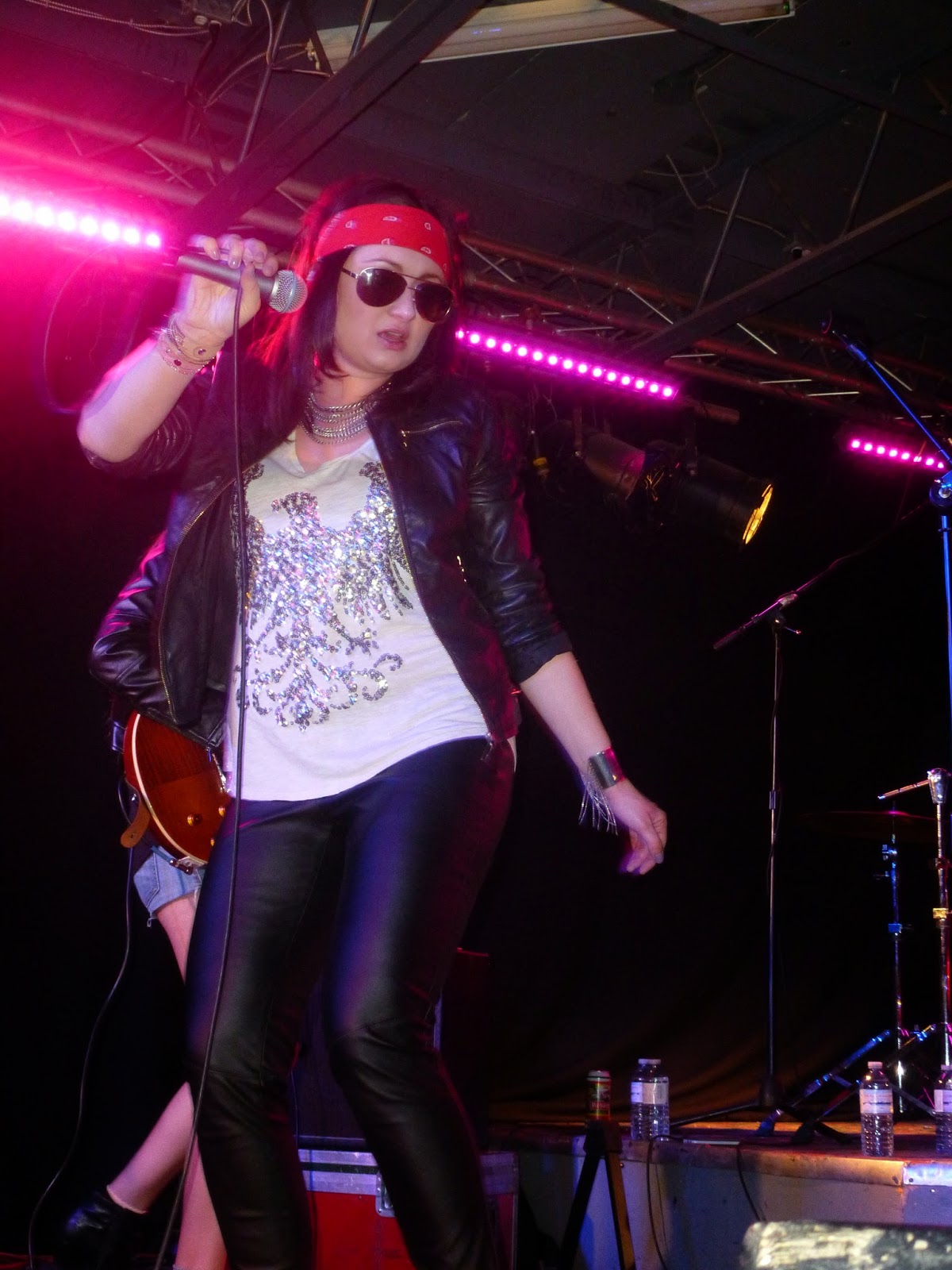 chops up and we were loving hearing these familiar tunes live. “Mr Brownstone” was a definite highlight, which I was able to capture on video and its follow up of “Sweet Child O’ Mine”. Unfortunately, the ladies still seemed to be having some sound issues throughout these first songs. A little feedback from singer Magdalena Baldych‘s mike was minimal and she quickly backed away from the monitors but the real issue was apparently coming from the bass cab which they had borrowed, theirs not crossing the border. Bass player Yuka Tadano could not hear anything in her monitors, so had no idea how it sounded I guess, well, out here it’s friggin’ awesome no worries! With the regular Rockpile soundman absent tonight (how dare he have a night off?…lol) another bass cab was brought on stage and quickly switched out. All this took no longer than about 3 minutes so there really was no stoppage in what was already an excellent performance. They continued to kick ass with “You Could Be Mine” from Use Your Illusion II and also the movie Terminator 2: Judgement Day but oddly not featured on the soundtrack, trailed by 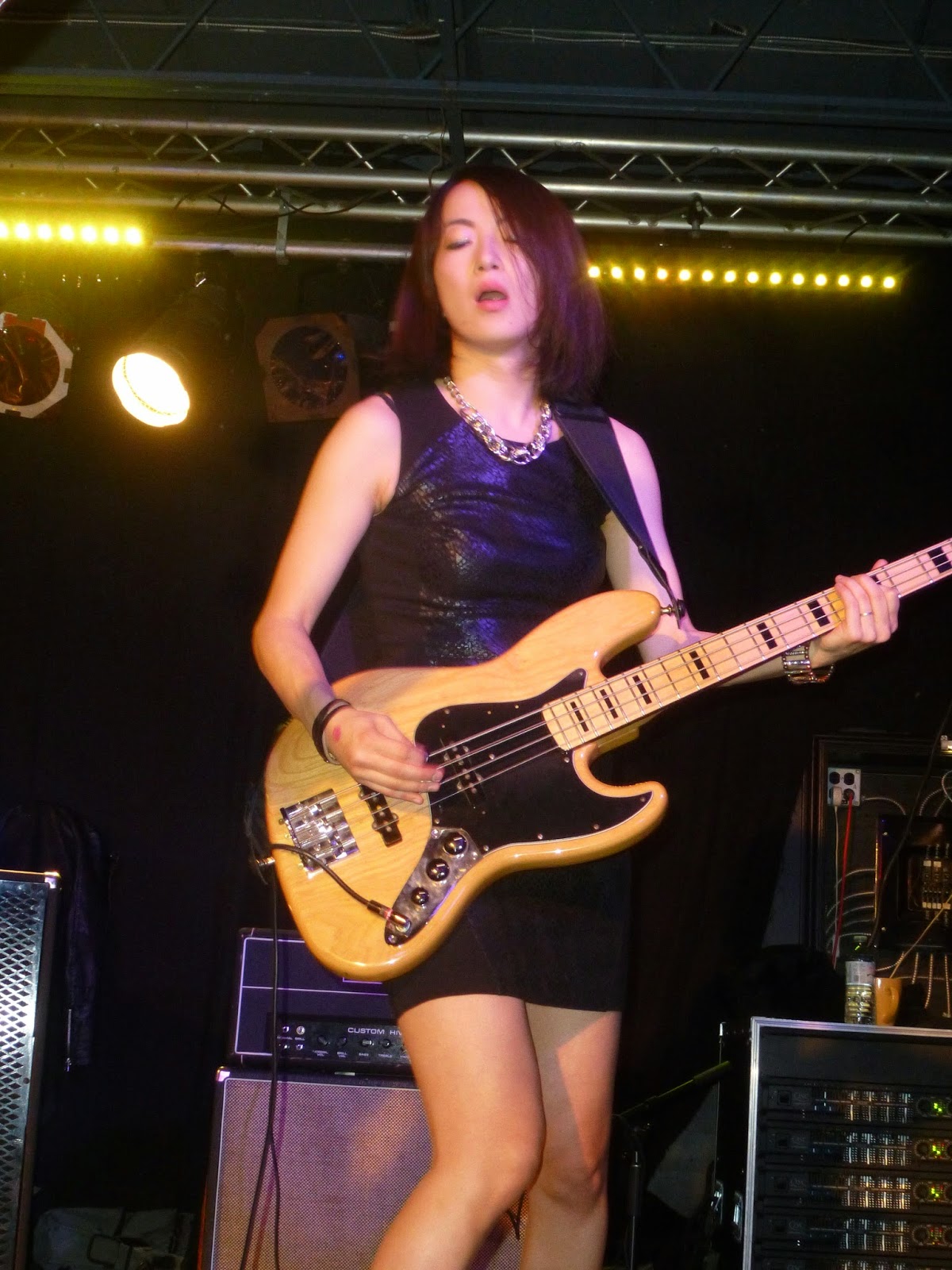 “Rocket Queen” including a blistering guitar solo. The rumor began to circulate that the band’s actual drummer had in fact not been admitted into the country, something that we’ve seen in the past here in Toronto. Singing along at the top of my lungs (apologies to anyone in actual earshot of my tone deafness) with my friends at these classic G ‘n’ R tunes delivered flawlessly by The Rocket Queens, I forgot to take notes and missed at least one song in the set. I’m sure I sang along with every word during it however! My all-time favorite (don’t even know why really) G ‘n’ R song “Out ‘ta Get Me” slipped it’s way into the set keeping me rocking away before the apparently difficult to play and somewhat deeper cut of “Perfect Crime”. The awesome Izzy Stradlin written (most of his G ‘n’ R written compositions are awesome) “Dust n’ Bones” took us through to “You’re Crazy” which for sure had everyone in the audience singing along! We were then treated to “Civil War” and I have to say that these ladies know how to rock serving up this awesomely executed cut. Where’s the top hat though Slash/Lily? “Welcome to the Jungle” came next and always makes me think I should watch Clint Eastwood‘s The Dead Pool with his “Dirty” Harry Callahan character again (for those that don’t get it, the song is 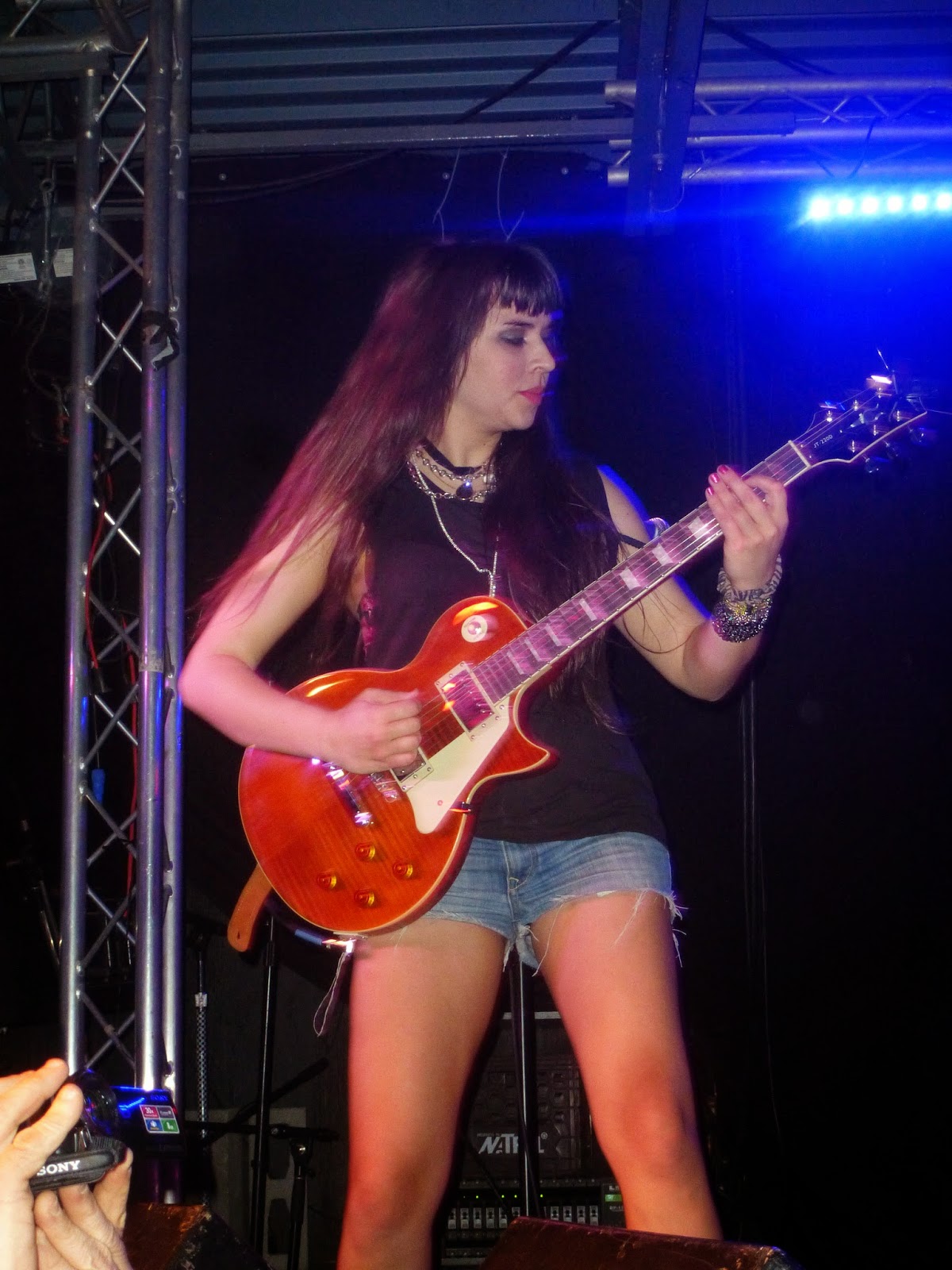 featured in part during a scene in the film in which Jim Carrey played the singer). Along with more singing from the crowd (did we ever actually stop? A definite sign that everyone was loving this) the G ‘n’ R covered Bob Dylan song “Knocking On Heaven’s Door” (which appeared on the Days of Thunder soundtrack) also featured some fantastic, but not overdone guitar noodling supplied by Lily Maase. They took a moment’s musical break to introduce each member of the band, Alicyn Yaffee and Lily Maase both guitar, Yuka Tadano bass, Magdalena Baldych playing the role of Axl including his sway dance, but not the attitude and “since our regular drummer couldn’t make it tonight Don Berger flew in all the way from Newark to help us out tonight”. Well, that explains a little, but no mention of why the regular couldn’t make it. “Knocking On Heaven’s Door” continued with a little of the “crowd-chanting-repeat-after-me” game, but thankfully once again not overdone, just a little fun and never losing our attention. “Nightrain” took us through to “Paradise City” which marked the end of the event but of course it wasn’t the end. The ladies had hardly left the 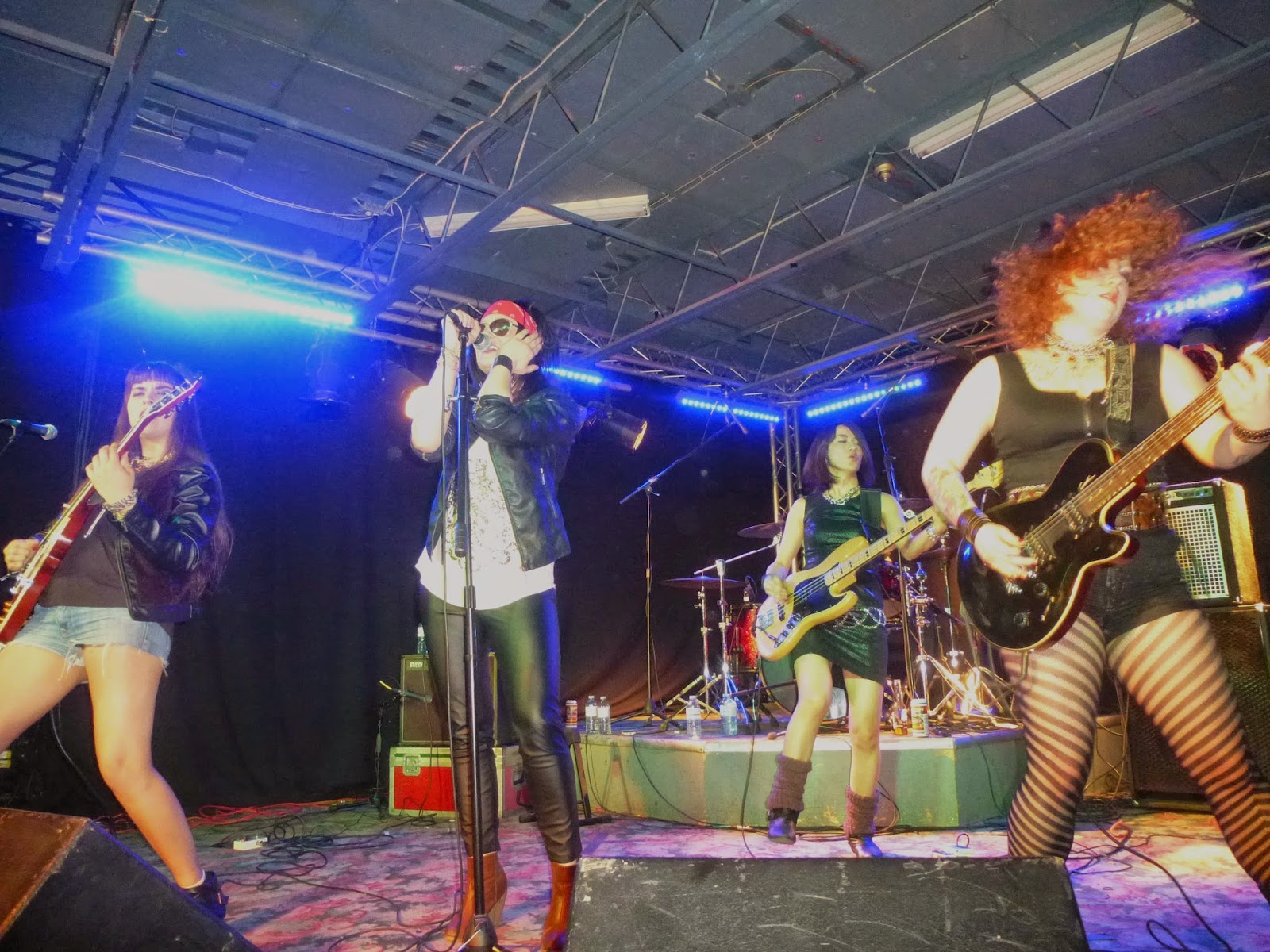 stage when they were seemingly instantly back for “Patience” (a song that I personally could have done without). What an overall smokin’ set list encompassing the best of Guns n’ Roses, there’s always more that would have been great to hear but an excellent representation. I have to personally send my thanks to The Rocket Queens for ignoring things like “Don’t Cry” and “November Rain”, although I may be alone in this. The Rocket Queens were out in the crowd to enjoy some celebratory beverages and mingle with Toronto’s rock fans after the set and a few moments chat with guitarist and founder Lily Maase revealed a very humble and personable performer who obviously loves being on stage.

Always a flurry of motion, these ladies don’t stand still on stage!! Someone once said to me that “chicks just don’t rock as hard as guys”. Well, they’ve obviously never seen The Rocket Queens! Catch these ladies if you can for a great night of classic Guns n’ Roses, I know I’ll definitely be there when they return to open for Adler August 21, 2015. 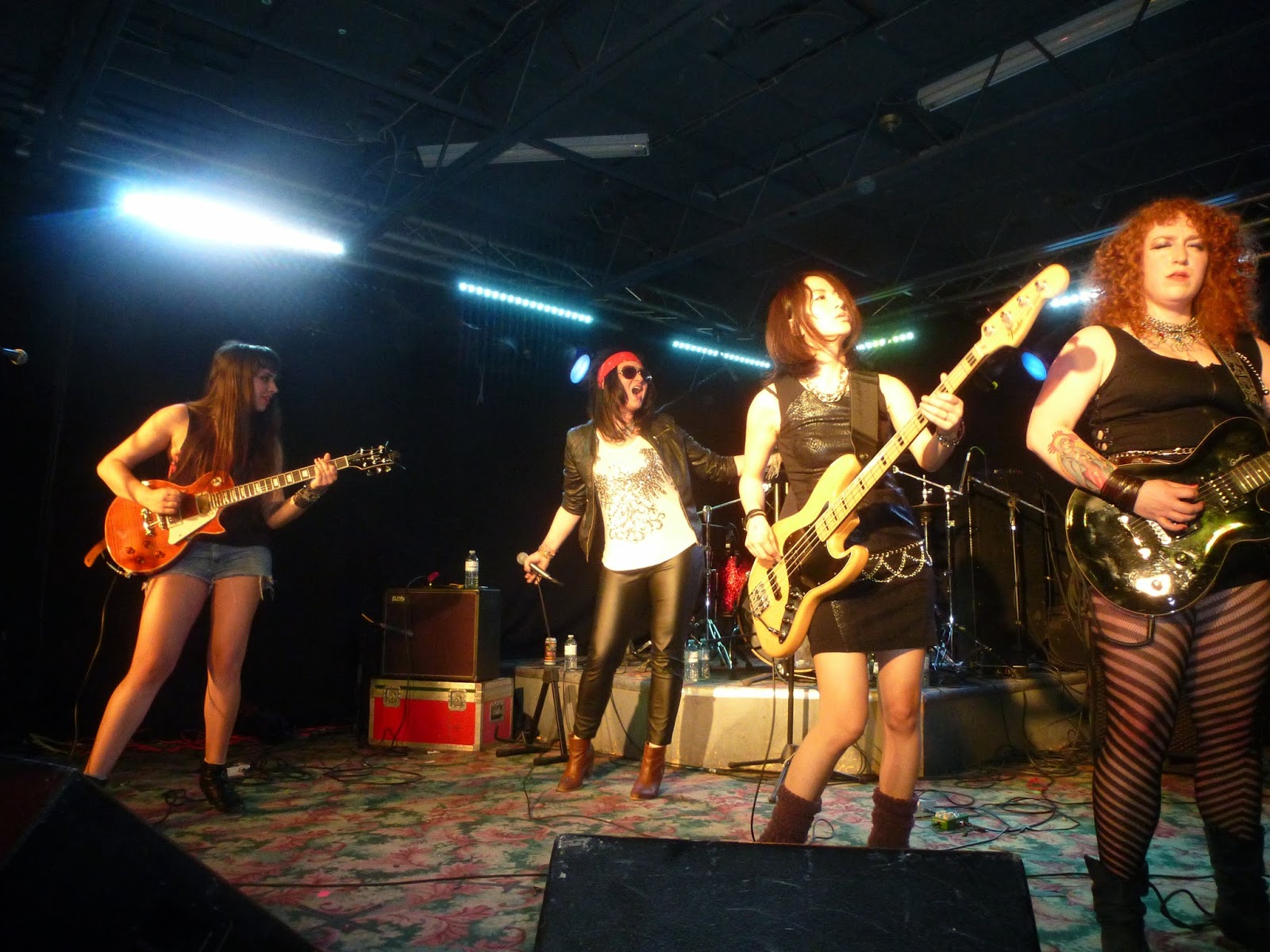 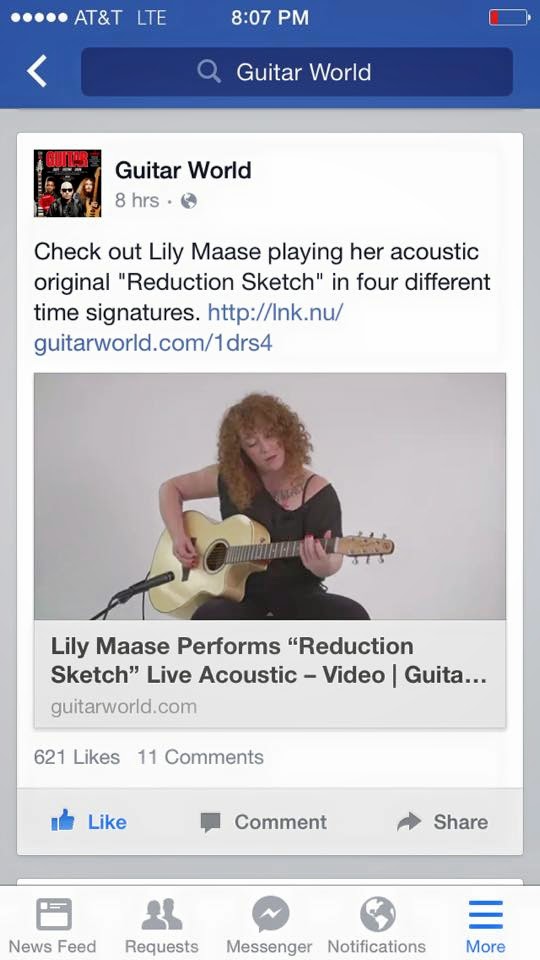 In some post-show internet searching I discovered that about a year ago Lily Maase was in a (from Facebook page) “life-altering car accident, after which I was robbed by an EMT, scammed by my phone company, abandoned by a large number of colleagues and friends, and shamed and patronized by a number of doctors and insurance staff for being female, single, and self-employed, all while making a living as a musician. It’s been a bit of an ordeal, and I am now living with the repercussions of a potentially career-altering injury. I also nearly lost my teaching business and, as a result, the roof over my head. Eleven months later, I’m just now starting to get my quality of life back to a somewhat reasonable level. And, nobody knows what the injury is or how to fix it. So, that’s something I’m going to have to contend with for a long time.”  Lily has begun to tell her story of the ordeal here in this article which will continue over the next couple of months or so and you can read the first installment here: Guitarist V. Geico Round One. Lily Maase has also been featured in Guitar World, which I can’t seem to actually find on the Guitar World site and is the founder of The Rocket Queens.

CONCERT PHOTOS BY: The Meister