I was very excited to receive Armored Saint’s Punching The Sky in the mail a full 4 days before the release date. The outside album cover looks like some volcanic floating island with yet another take on the familiar Armored Saint font at the top. Inside are two marbled purple discs in Metal Blade sleeves, as well as a poster of album cover components and (thankfully) a digital download code. Why thankfully? Because unfortunately I got two copies of the same disc – sides 1 and 2! So I needed the electronic version to get through the whole album (which, by the way, is sequenced differently than the vinyl LPs). I’m glad I did, because this album rocks hard and is going to be a candidate for top album of 2020. Punching the Sky is Armored Saint’s 8th full length album, and their first since 2015’s excellent Win Hands Down. 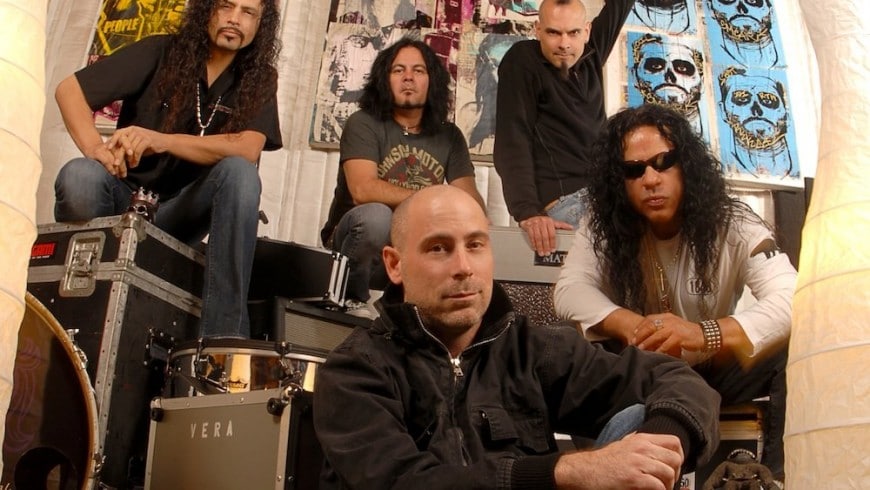 Putting the needle down on the first disc, I was surprised by bagpipes, but after the intro built up the tension, John Bush’s distinctive voice and the punch of Armored Saint came blasting through the speakers. Standing On The Shoulders Of Giants sets the stage for an hour of excellent hard rock and metal, and will make a good show opener once we all get back to live music. The second tune End Of The Attention Span has an awesome riff and ups the ante on the energy level. Someone really paid attention to sequencing, as My Jurisdiction brings the tempo down a little, but is no less loud. It also gives lead guitarist and founding member Phil Sandoval the first opportunity for a great solo, and the song and side 1 ends with a flurry of heavy notes. This far in, it’s obvious that this sounds like an Armored Saint album – they didn’t make too many changes to a winning formula, just added enough variety to keep us listening.

Side 2 opens up with more sound effects, this time of banging pipes and scraping guitar for Bubble. A heavy driving guitar riff interplays with Bush’s voice, before opening into a melodic chorus. Another good solo by Sandoval here close to the end. Continuing the creative intros, a little drum solo by Gonzo Sandoval opens up the next song Do Wrong To None, which, when combined with the staccato guitar, reminds me of flying bullets. Some intricate guitar work shows up in the next mid-tempo tune, Lone Wolf. Dizzy (GnR) Reed’s keyboard can be heard here in the background, but the bulk of the song is a showcase for Bush’s voice to come through. This song has the next great solo on the album, with both Sandoval and guitarist Jeff Duncan taking turns. Side 2 fades out as Bush sings “Don’t ever kneel.”

Side 3 on the second disc contains only 2 songs – but they’re two of my favorites on the entire album. Missile To Gun’s riff sets a quick tempo and Bush does his best scowling, while the twin guitars have a short solo together. I also love the fake ending, before the riff comes back for more. Fly In The Ointment starts out with a bang, before getting quiet for the verses. The continuous change of noise and tempo as the album goes from one song to the next ensures your paying attention, because there’s not one song that can be considered filler. Dizzy Reed makes another appearance here, but not to worry, this is no ballad. The chorus is loud with melodic guitar and heavy drums. Still – it’s Bush’s most melodic song on the album, and he can show just how accomplished a singer he is. The song ends louder and faster, and I wish I didn’t have to get up to flip the album, because now I’m pumped!

The final side begins with Bark, No Bite, which changes it up yet again. The off beat on the drums gives this a different feel, and the guitars start off melodic, until Sandoval brings in the heavy guitars for the chorus. Even the early solo before the second verse shows how they played with the song structure. This is definitely a killer tune, with plenty of guitar to shred along to. Next up is the atmospheric opening to Unfair, a mid-tempo song with a slow build that has Bush singing in a very low register, but again ends loud and fast. Speaking of which, we’ve arrived at the final song on the album, Never You Fret, and we’re back to the harder sound with a screaming Bush and another great riff. The short notes and the constant snare drum give the song an urgency, like they’re warning you to enjoy it now before the album comes to an end. The breakdown and long solo really get the heart pumping. They saved the best for last, and I’d have to call this my favorite song on the album.

With an amazing vinyl package, a well-sequenced and mostly heavy 11 tunes, excellent production by bassist Joey Vera, and a final song that leaves you wanting more, I’d call this a very worthy follow up to Win Hands Down, and just in time. 2020 isn’t a total loss thanks to bands like Armored Saint, who are keeping rock and metal alive.