Baby I'm Down to the Bare Wire: Where "Shock Me" Came Together 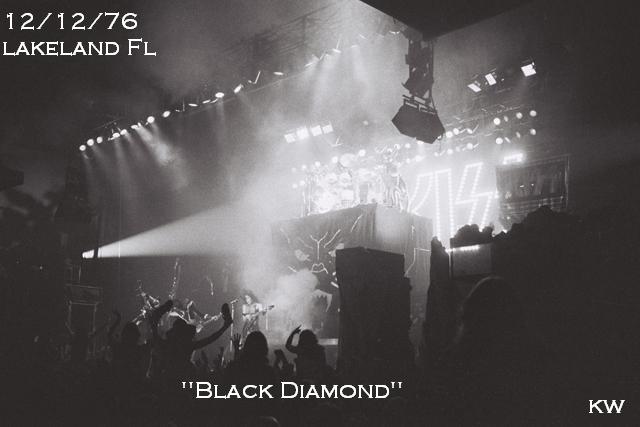 KISS performing at the Lakeland Civic Center, 12/12/1976 (photo courtesy of Kevin Witte)
Lakeland, Florida was founded by Abraham Munn in 1882. He almost called it Red Bug but then looked around at the 38 lakes in the area and gave it a more appropriate name. Frank Lloyd Wright designed nine buildings at Lakeland’s Florida Southern College. The Detroit Tigers go to Lakeland for spring training. A scene from Edward Scissorhands was shot at Lakeland’s Southgate Shopping Center. But why would a decibel geek care about Lakeland? Well, 2006 Playmate of the Year Kara Monaco was born there.
And then there’s the Lakeland Civic Center.

Located at 701 West Lime Street in scenic Lakeland, the Lakeland Civic Center arena opened its doors in November of 1974 with a capacity of more than 8100. Some amazing concerts took place there: Aerosmith two nights on the Toys in the Attic tour, Van Halen on the Van Halen II tour, Foreigner with the Cars opening in 1978, Queen on the Jazz tour, Journey with the Babys opening in 1980, Black Sabbath on the Heaven & Hell tour with a personal fave Riot opening, Saxon opening for Rush, Van Halen on the Fair Warning tour, AC/DC on the For Those About to Rock tour, Cheap Trick on the All Shook Up tour with Pete Comita on bass, the Plasmatics opening for KISS on the Creatures of the Night tour with Vinnie in the ankh make-up, Def Leppard on the Pyromania tour, Iron Maiden on the Number of the Beast tour, Ozzy Osbourne touring for Bark at the Moon with Jake E. Lee on guitar, Judas Priest on the Defenders of the Faith tour, Twisted Sister and Ratt less than a week apart in October 1984, Dokken opening for Dio on the The Last In Line tour, W.A.S.P. opening for Quiet Riot on the Condition Critical tour, Twisted Sister again opening for Iron Maiden on the World Slavery Tour, Dio again with Ruff Cutt opening, Yngwie Malmsteen opening for AC/DC, Dokken opening for Judas Priest, Cinderella opening for David Lee Roth two nights in 1986, Yngwie again opening for Maiden, Guns N’ Roses opening for Motley Crue two nights on the Girls Girls Girls tour, Queensryche with Def Leppard, Cinderella with Judas Priest, Queensryche with Metallica, Kix opening for Ratt. Unbelievable, right?

On June 14th, 1979 KISS held a special performance at the Lakeland Civic Center…to an empty house. That’s because they were rehearsing for the Dynasty tour. Billed as “The Return of Kiss,” the tour would be the most ambitious the band had yet staged, with elaborate new costumes and the debut of both the flying Gene stunt and Ace’s glowing guitar which fired rockets from the headstock. The tour was set to begin the very next night, June 15th, right there at the Lakeland Civic Center. It was an interesting choice for the tour’s opening venue considering that less than three years earlier that very site had born witness to one of the most infamous moments in KISStory. No, the KISS Meets the Phantom of the Park script was not written there. Was there even a script? I’m talking about the fact that it was in that venue that Ace Frehley was nearly killed.

It happened on December 12, 1976, two weeks into the Rock and Roll Over tour. Uriah Heep opened the show supporting their High and Mighty album, which was their last to be recorded with original singer David Byron. Byron had already been replaced by John Lawton of Lucifer’s Friend in time for the tour. KISS began their set elevated high above the stage on risers. As the band revved up the crowd with their opening number, “Detroit Rock City,” the risers descended and the band members then had to negotiate a staircase in platform heels to get to the stage proper. Apparently one of the lights on a metal railing of the stage set had shorted out. When Ace Frehley reached for the handrail to assist in his descent he unwittingly completed an electrical circuit with his body and/or guitar. Since the current entered through his arm it most likely traversed the heart region of his body. Electrocution is at its most lethal when the heart is affected. When electrocution occurs it overrides the central nervous system. The muscles suddenly have minds of their own and it is often impossible for the victim to detach from the source of the current. To many members of the audience that night the men on the stage were larger than life. Superheores. This was not your average rock concert. The members of this band were in character. Suddenly the fourth wall had crumbled. Paul Daniel Frehley, mere earthling after all, found himself in perhaps the most vulnerable position a human being could be in:


Muscles triggered by an external (shock) current will involuntarily contract, and there’s nothing the victim can do about it. This problem is especially dangerous if the victim contacts an energized conductor with his or her hands. The forearm muscles responsible for bending fingers tend to be better developed than those muscles responsible for extending fingers, and so if both sets of muscles try to contract because of an electric current conducted through the person’s arm, the “bending” muscles will win, clenching the fingers into a fist. If the conductor delivering current to the victim faces the palm of his or her hand, this clenching action will force the hand to grasp the wire firmly, thus worsening the situation by securing excellent contact with the wire. The victim will be completely unable to let go of the wire.
—Wiki.answers

The human body’s capabilty for resistance to an electrical shock is variable, in other words what kills one person might not kill another. There is no way to know the amount of current Ace was subjected to but he says in his book that he had burns on his fingertips, which would indicate the situation was quite serious. Burnt skin is usually the result of a high voltage shock and once burnt the skin is no longer as effective a protective barrier, meaning the victim is even more vulnerable to the electricity. Taking all of this into account one must concede that it is nothing short of a miracle that Ace was able to let go of that railing and survive the incident. Stone the Crows guitarist Les Harvey (brother of Alex Harvey) died on stage (during soundcheck) in 1972 after being electrocuted. Yardbirds singer Keith Relf was electrocuted by his guitar in his home in 1976 and died. But in Ace’s case the source of the current was not his instrument, at least not directly. In fact, it is perhaps reasonable to extrapolate that the guitar took the brunt of the electrical shock. Think about it–could the Gibson Les Paul have saved Ace Frehley’s life? Plausible theory or not, Ace was extremely lucky. He somehow let go of that railing and collapsed a few feet to the stage. He was helped backstage by members of the crew and found himself, dazed, sitting there listening to the crowd chanting his name. “We want Ace! We want Ace!” When he bravely returned to the stage ten minutes later they gave him a standing ovation and KISS finished the show. Gene Simmons, not one to be upstaged, set his hair on fire (no joke).

Ace Frehley credits the incident with inspiring his song “Shock Me,” not the first song he would write for KISS but the first he would sing. So do we have Lakeland Civic Center to thank for “Shock Me,” and if we do, do we also owe the venue thanks for the results of Ace’s subsequent creative burst: “Rocket Ride,” “Rip It Out,” “Speeding Back to My Baby,” “What’s On Your Mind,” “Save Your Love,” “Talk to Me,” et al? I for one say…

Special thanks to Kevin Witte for the amazing photos he took that night. He was the only one to capture this important moment in Kisstory. Thanks, Kevin.