Bach Redeems Himself in The Meister’s Eyes (And Ears) 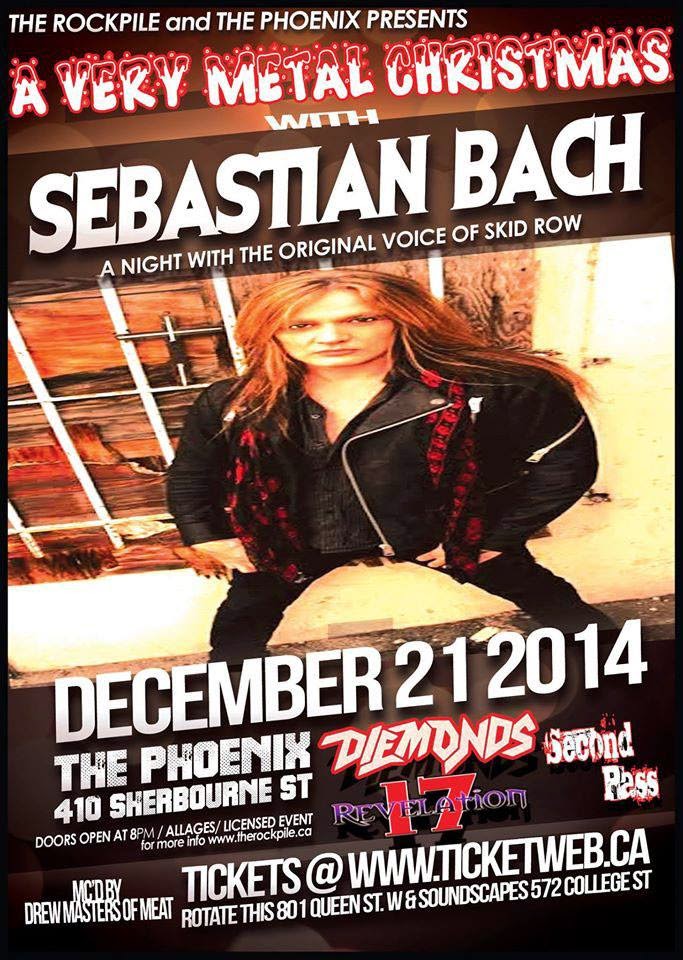 I won’t lie to you good folks.  The Sebastian Bach show announced for December 21, 2014 in Toronto did not hold a ton of interest for me after what I had witnessed during his performance at the M3 Festival in Baltimore back in April of 2014.  During that M3 performance, I found him to be ridiculously, even insultingly arrogant, yelling at and berating the audience and just generally a horrible show (M3-Saturday April 26, 2014).  I happily coughed up my $40 ticket price to see the direct support band, Toronto’s own Diemonds, who if I’m not mistaken were hand picked by Bach himself to set the stage for him.  Fresh off performances on the KISS Kruise IV where they rocked the high seas, Diemonds simply kick ass, embodying the spirit of the 80’s and their band logo even appear in my tattoo.

Meeting friends at the venue I learned that the Bach Meet & Greet that they had arrived for at 4PM had been postponed until after the show.  They didn’t receive this information until after they had been kept waiting out in the cold for about two hours and once they were finally allowed into the venue the merchandise booth was selling M&G tickets for $120 ($30 less than what they advance paid!).  Where should the finger be pointed on this one, who knows?  At Bach for not being bothered to come to the venue and meet these people who paid decent money to do so, probably.  At the M&G organizers, for the lack of communication, organization, and continuity in pricing, probably.  Hearing about this certainly wasn’t doing much to improve my opinions of Bach formed from the M3 fiasco!  Come to think of it, didn’t he cancel his last scheduled show in Toronto under wishy-washy circumstances?

them in the past.  I was about four or five people back from the barrier when Diemonds blasted out onto the stage with “Meet Your Maker”. See the video on Meister‘s Facebook page: “Meet Your Maker”.  “Holy crap!” I missed this band (been a few months since I’d last seen them)!  While the band, consisting of C.C. Diemond and Daniel Dekay on guitars, Tommy Cee on bass and Aiden Tranquada behind the kit, were right on cue, vocalist Priya Panda‘s mike certainly needed to be cranked up a notch or three, something that the crowd tried shouting out to the band on a few occasions.  It was increased as they went on, but not quite enough and Panda seemed to get drowned out in the mix at times as you can tell from my “Meet Your Maker” video.  Diemonds ripped through a longer than usual set including hits from their 2012 The Bad Pack album such as “Lil’ Miss” and “Get The Fuck Outta Here”, a video for which appears on The Meister‘s Facebook page: “Get The Fuck Outta Here”, but the majority of their set was comprised of selections from the forthcoming album, titled Never Wanna Die, due on April 20, 2015.  Priya also took a moment to pay homage/respect to Diemonds‘ fallen comrades and former band members whose lives were tragically cut short, Allan Riches and just a few weeks before, Paul “Cuso” Mancuso.  Despite that somber few moments Diemonds led a spirited set that even though I was unfamiliar with the tunes left the crowd screaming for more, me wanting the new record immediately and a definite bar for Bach to follow.

Immediately after Diemonds finished M.C. Drew Masters of M.E.A.T. Magazine (a staple in my days of youth) took the mike as they were clearing the stage and invited up some travelers who had made the trek from Ottawa (about 5 hours away) for the show.  While Drew enticed the young lady to give an “Ottawa style” shout out the gentleman got down on one knee and proposed marriage to the lady’s delighted shock.  As they left the stage I jokingly announced to those around me “Well, that’s it then, I guess I can go home now!”, but I didn’t go home, of course, just moved a few people back closer to the bar and ready to escape if Bach played his “offend the audience game” again.

In keeping style with the Axl Rose side of Mr. Sebastian Bach, he was more than a little late going on stage (approximately an hour), a practice that had organizers scrambling and worrying.  But he finally did hit the stage and hit it like thunder I must say!  “Slave to the Grind” began the assault with an intensely high energy as Bach whipped around the microphone swinging it by the cord overhead.  “Hell Inside My Head” and “Temptation” from his latest album, Give ‘Em Hell, continued the barrage bringing us to his address of the audience.  On this run of the tour he told us that they had just performed 13 shows in 13 days and had saved the best for last, Toronto.  Bach growing up in Peterborough, Ontario (about 1.5 hours away) considers Toronto his hometown and throughout the evening peppered us with humorous stories of his youth.  By the time we’d gotten this far I was thinking how impressed with Bach‘s charisma and the band’s abilities I was as they launched into “The Threat” followed by “Big Guns”.  “Piece of Me” was dedicated to his Mom who was in the front row for tonight’s concert and “18 And Life” saw him sporting a Santa hat.  His interactions with the crowd were certainly a complete turnaround from what I had witnessed at the M3 Festival earlier this year!  Bach had the audience (yes, me as well) with him all the way as they sang along to all these seminal Skid Row classics.  “Tunnelvision” and “American Metalhead”, renamed “Canadian Metalhead” for this performance were next up, the latter preceded by a shout out to KiLLeR DWaRfS skin basher Darrell “DWaRf” Millar who was somewhere in the audience.  “In a Darkened Room” was dedicated to Pantera‘s Dimebag Darrell being his favorite Skid Row song and I was able to capture the song on video: “In A Darkened Room”. “Monkey Business” followed quickly behind but was to be short lived.  In an event that has already been flooding YouTube and the internet Bach suddenly screamed “Do you wanna stop the show?” and continued into a profanity-laced tirade at a fan who had apparently bumped into his 70 year old mother in the front row.  Now while I’m perhaps protective of my own mother in a similar fashion, at her 70 years of age Mrs. Bach should surely not have been against the barrier, but perhaps watching from side stage especially since the audience was a little rough and pushy/shovy down in front.  Several of my regular concert-going friends remarked on the “roughness” down in front at this show, so it must have been more so than usual!  “Take it from the breakdown” he called to his band after the tirade in which he threatened to “leave the stage if there were any more idiots” and they picked it up finishing off “Monkey Business” which included a segment of the classic Christmas carol, “Silent Night” and Rush’s “Tom Sawyer”.  Here’s a fan-filmed video of the incident, anyone else find it humorous that the tirade happened as he sang the line “all is calm” from the classic Christmas carol “Silent Night”?

But before they officially ended the song, the guy had been removed from the audience by two rather burly security fellows and Bach continued, joking about magazines saying he suffers from LSD (Lead Singers Disease) and how cowbell cures it (enter cowbell).  Bach didn’t lose a step and lapsed right back into his previously upbeat demeanor recounting some more humorous stories before treating us to a rarely played track from what he called an “underrated album” with “Breaking Down” from Skid Row‘s Subhuman Race.  “I Remember You” was not surprisingly a huge hit with the audience and I was able to grab this on video as well “I Remember You”.  As you can see in the video Bach is quite interactive with the crowd and while his vocals are, as he says “not bad for an old guy” they certainly aren’t what they were as to be expected with age and he was often assisted throughout the show by some sort of backing vocal track as you can hear at points in the video as well.  One friend remarked to me that “he sings more from his head these days – very nasally & thin, compared to the ball-busting vocals he’s known for (where he was obviously using his diaphragm).” More Bach stories and reminiscing of his youth preceded “All My Friends Are Dead” and “Youth Gone Wild” came complete with band intros and a little more Christmas caroling with “Hark the Herald Angels Sing”.  I assumed that would be the end of the show with that song, but we were treated to something else with a cover of Aerosmith‘s “Movin’ Out” before it was all said and done.

Well, to me Bach redeemed himself in spades.  Yes his voice may not be what it once was and say what you like about his “LSD” and antics, when the man is on, he’s on and December 21, 2014 in Toronto he was just that!  I went into the show expecting to be agitated and leave early to coming out of the show wondering when the next Bach show would be and how far I would have to travel to see it!  Unfortunately for the meet & greeters the night was to drag on for hours to come as they were told to remain behind while everyone else was ushered out of the venue.  They were then taken onto the bus in groups of five, yes that’s extremely cool, but two hours later as you’re still waiting for your turn it kind of loses its luster.