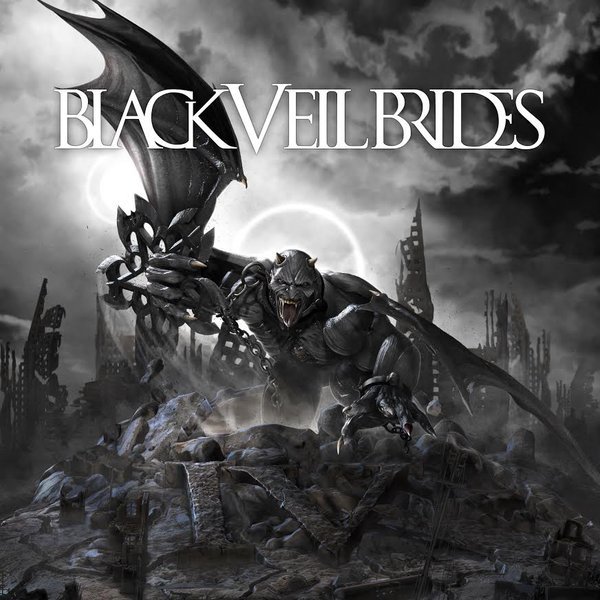 It’s too bad MTV doesn’t play videos anymore because that’s a medium Black Veil Brides could definitely exploit.  Which has made me question.  Why do I even know who these guys are?  Bands like Iron Maiden and Metallica made their fame without the benefit of MTV or even radio.  But it seems easier to find BVB on a magazine cover than it is to find a disillusioned teen sporting one of their shirts at a rock show.  But they must be doing something right as they just released their fourth full length album (cleverly titled IV).  Produced by Bob Rock so you know it’s gonna sound huge.
The opening track Heart Of Fire is pretty standard BVB.  Either Andy Biersack knows his audience or he’s still plotting revenge against the jocks who shoved his head into locker room toilets of whatever Ohio High School he attended.  It’s a common theme in rock aimed at teenagers.  No one understands you… but me.  Alas it’s not a bad song.
Faithless is next and its starting to become clear they are making a conscious effort to be heavier.  If Bob Rock has a calling card it’s getting a great guitar tone which he delivers.  This is basically the same song as the first one.  Blah.
Next we have The Devil In The Mirror.  It seems Andy is now not taking shit from himself.  This isn’t bad.
They slow it down just a bit for a song called Goodbye Agony.  I like the song but as is the BVB handbook the lyrics are sung with more earnest than the words merit.  I may just be taking it too serious.
When World of Sacrifice comes around, the first sign of real melody comes with it.  There are some legitimate hooks in the riffs.  The chorus dies a bit but overall this is the stand out track to this point.
I wouldn’t expect a song called Last Rites to sound so happy but the dichotomy works.  Again a strong melody.  I haven’t even made it through the first chorus and I can say this is a good song.  This is the first song that feels whole.  More please.
Stolen Omen is next.  Maybe it’s the beer talking but this record seems to be amping up the further in you get.  Ok this a good song but as limited as Andy is as a singer he is just bad at the whole growly thing.  Other than that this is a solid track.  One for all the fist pumpers out there.
They slow it down again for Walk Away.  It’s just hard to relate to lyrics like Now our lives have changed, I wish that I could heal Time has taken love, a darker side revealed For every lie begins, with what we used to feel  I honestly have no idea what that is supposed to mean.  Which is how I would describe most of their lyrics.  Its an enjoyable listen but the message is garbled.
Next is Drag Me To The Grave which starts off about as good a song can start.  Its cool but again Another victim another viper? I can feel sins getting tighter.  WTF I am supposed to take from that?  But this wouldn’t be the first time I ignored lyrics and just rocked.  I do like this song.  A lot.
The Shattered God is a peppy little number with some auto-pilot guitar shredding.  With only two songs left I can say the second half sticks out much more than the first half.  The chorus is pretty plain but the verses carry it well. And of course I have no idea what they lyrics are about.  A combination of teen angst, rise above it and possibly a tinge of implied Greek mythology?
A song called Crown of Thorns has got to have some “If you only knew” theme right?  Nope.  It’s probably the catchiest so far though.
Last song.  Sons of Night.  How will they bring it home.  Pretty strong.  Obviously I’ve given up trying to figure what the hell he’s talking about.  I like this song.
Andy’s love of KISS is clear with the anthemic nature of BVB’s songs.  It just doesn’t sound real.  While I think Andy has more vision than ability the rest of the band is top notch.  By no means is this a bad record but I don’t understand why they make you wade through the mediocre songs at the start before you start to hear songs with some individuality.  The first three songs are background noise at best.  And with Bob Rock at the helm I was hopeful he could pull some legitimate singing from Andy.  But we just get the same “I wanna hit a note that I can’t” that has preceded this record.  One thing about Andy Biersack though.  He’s resilient.  And while my crotchety ass has no idea what it is he clearly has a vision.  And the fact that I’m writing about his band shows he’s doing something right.  While it is a band, no Andy = no BVB.
If you liked their past work you’ll like this.  And your money will be going to a band that was actually in the studio when the record was recorded.  Take that Taylor Swift!  (It’s ok.  She’ll shake that off.)