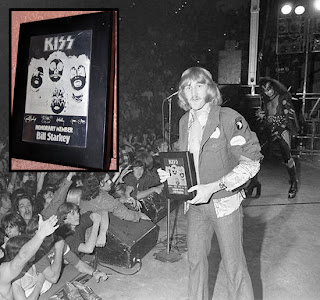 How old were you when you first started listening to music on a regular basis and what were the first bands/artists that you listened to?

Music was always on in our house. I grew up in the ’60s, when music was at it’s most creative and most diverse. I was taking guitar lessons and Johnny Cash & The Ventures were what I was playing along to, believe it or not. Watching The Ed Sullivan Show every Sunday night was a family thing as well. It helped that my father worked in a warehouse shipping records for Columbia Records in Terre Haute, Indiana. At that time, most of the records in the world were pressed or made right there in Terre Haute.

What exactly were the circumstances by which you discovered KISS?

I first saw a picture of Gene in our local newpaper in the TV listings section. It said KISS would be appearing on ABC’s In Concert. I forgot about it but later ended up watching the program that night only because I wanted to see Foghat perform. I forgot about seeing Gene’s picture that morning while eating my breakfast cereal. Needless to say, KISS blew me away. Foghat, not so much.

I have a layperson’s knowledge of how the KISS Army came into being but for those people reading who don’t know, could you provide a more detailed account of the KISS Army formation?

I had my father bring me home the first couple of KISS albums because he was an Expeditor for Warner Brothers Records, who were shipping out Casablanca Records at the time. I loved both albums. So did my school chum Jay Evans. It was my dad who would tease me about KISS because he was on the phone daily with their shipping people – their sales sucked compared to other artists that he shipped for.

The Warner Brothers people offered my dad free tickets to see Deep Purple in Indianapolis and my dad asked me if I wanted to go. I said sure but the tickets never materialized. He then asked me if I’d “settle” for KISS and I said sure. I just wanted to see what a rock concert was like. So, on a cold December Sunday evening, we drove through the snow to Evansville, Indiana to see KISS open for Z.Z. Top. KISS blew them away. My father was impressed (even though he preferred Sinatra, he loved KISS’ enthusiasm).

Three weeks later, KISS was playing in Indianapolis and he dared my mom to go with us to see KISS again. She did. It was a 5 hour concert marathon where KISS played last as the opening act, yet went on AFTER MIDNIGHT on Sunday morning. They still kicked ass (though most of the crowd left).

I came back to school and on the bus that morning, I told Jay how great the KISS shows had been. He said that we should try to get them on our local radio station (we only had one in Terre Haute). We’d hang out in my basement and call the radio station asking for KISS. We were told that they don’t play KISS and that the program director thought KISS was “another new York fag band”. Jay was on this “army kick”, so we decided to call ourselves the KISS Army when we called. Other times, we’d write letters.

Several months later, KISS was a headliner (albeit in small venues) and I convinced Jay and some of our classmates to hitch a ride to Indianapolis to see KISS with Rush. That was it. The KISS Army was born and our classmates started calling the radio station. Another guy at school printed our own KISS t-shirts and we’d wear them to school and get ridiculed because KISS wasn’t on the radio like Aerosmith or Lynyrd Skynyrd was (our competition for radio play).

We eventually started writing silly letters saying “play KISS or we’ll blow up the station”. We’d cut out pictures from Circus Magazine and paste them on our letters. Since all of this was happening in my basement, Jay decided that we should have titles – I was the President and he was Field Marshall Evans.

The radio station still didn’t give in. They’d play something like “Love Theme from KISS” to piss us off or play a KISS tune and NOT tell the listeners that it was KISS. This was done to piss us off. By September, KISS’ Alive! album came out and another radio station was born. They played tracks off of Alive! because their play list wasn’t as tight.

Then KISS announced that they’d be coming to Terre Haute in a couple of months. The program director of the new station got in touch with me and asked me to write my same threatening letters and he’d read them on air for two weeks until the concert. Eventually, the concert sold out. At that time, only Elvis had sold out the arena, while other acts and KISS’s peers (like Aerosmith and Lynyrd Skynyrd) had not. When KISS’ people asked why, the new radio station people told them about the KISS Army and they contacted me.

Can you imagine the feeling that I got when KISS brought me onstage to give me an award during their encore in front of the very same schmucks who teased us about the band six months earlier during our senior year? What revenge. I probably felt on top of the world that night, which was pretty good for a guy with no job, no car and no future at that moment in time. Sounds like a movie, doesn’t it?

What exactly was it about KISS that made you decide to take matters into your own hands as far as demanding that your local radio station play their records?

We couldn’t believe that other acts were getting more airplay. It was almost like the Rock and Roll Hall of Fame thing – you are angry over who is in and who isn’t. And we were crazy teenagers who thought we knew everything.

Were there any other bands/artists besides KISS that you demanded your local radio station play?  If so, who?  If not, why not?

I didn’t but Jay asked for some obscure stuff to be played. The stupid thing was that the radio station usually gave in to whatever it was. It was the early ’70s and FM radio was wide open. It just seemed like the program director liked dicking us around.

Who designed the KISS Army logo?

Alan Miller, who contacted me through Rock Steady Management, asked us to create a logo. Jay took on that assignment. Those early pictures you see is what he came up with. They didn’t use it and to this day, no one knows who created it. Possibly the guy who did the Destroyer cover. By that time, the fan club concept was taken out of my hands and given to a professional outfit. Boutwell Enterprises was their name and they could have designed it.

What did you personally think of the disco and pop turns that KISS took in the late 1970s and early 1980s with the Dynasty and Unmasked albums?

By the late ’70s, my interest in the band waned. Mainly because we lost contact with each other. They were huge and I was no longer really involved. Early on, I would have killed for those guys, which I think they realized wasn’t a healthy thing to continue to feed. But it was great to hang out with them the few times that I was allowed and that just made me more of a diehard.

I started listening to more alternative stuff by the beginning of the ’80s. I never let go of my KISS albums though and I always tried to keep up on the band. I mean I DID have an important part in the beginning and I wasn’t going to ever forget my place in KISStory.

Did you continue to listen to KISS throughout the 1980s and the 1990s?

When they took off their makeu
p and changed musicians, it was hard for me to accept. I didn’t give them another listen until a young kid in my factory warehouse told me to listen to Revenge. He knew about my past with the band and he was a real metal head. I loved Revenge! Loved it – still do!

Have you formed any other Armies (or Armies of sorts) since the KISS Army?  If so, please discuss.

Please – there is no other army. We had some friends knit a sweater for Rick Neilson of Cheap Trick once and he actually wore it on stage. That was cool. I never intended to meet KISS when we started our KISS Army assault – it was all about the music.

What are some of your favorite bands/artists (old or new) in 2012?

U2, Bruce Springsteen, Tom Petty, Coldplay, Beck, Moby, Tom Waits, Willie Nelson and even Emmylou Harris. There’s great music out there, you just have to find it. I don’t believe that file sharing has stopped great music from coming out. LPs still sound better than digital music as well.

Feel free to discuss any of your other endeavors (musical or otherwise) here.

Nowadays, I teach in an urban school district. Sometimes my students ask me about my KISS years. Of course I think they probably think that KISS are either WWF wrestlers or some sort of monsters. I don’t think they are aware that it’s all about the music. However, I haven’t been able to find an excuse to bring it into my curriculum.

I’ve always said that kids are a product of their environment. They only know what they’ve been exposed to. It’s quite possible that they could ALL turn into KISS fans if introduced. I truly believe that they could.

Thanks for your interest. 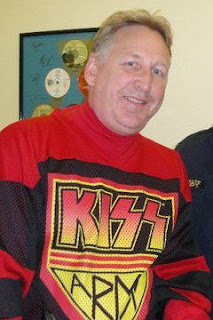