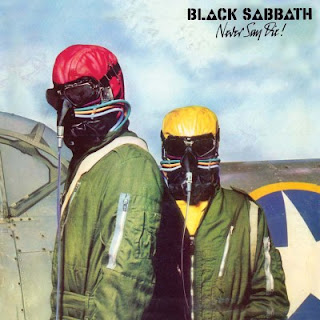 Never Say Die, Black Sabbath’s album from 1978, has a bad reputation. Hipgnosis definitely dropped the ball on the ridiculous cover. The entire band was strung out on drugs. Ozzy Osbourne had quit and been replaced, only to return shortly before the album was set to be recorded. Even so, this would be his last album with the band. Afterwards Ozzy claimed to be ashamed of the album and guitarist Tony Iommi called it “off the wall.” Neither comment is fair. I don’t care what anyone says about Never Say Die, it is far, far better than the preceding album, Technical Ecstasy, which is without question the worst record the band recorded with Ozzy and a contender for the worst Black Sabbath album period. Forbidden probably holds that title, but you wanna talk about bad album covers!?

In my opinion, despite the drama, Never Say Die is a good album. Hell, half the record is great. As I mentioned earlier Ozzy had quit the band in 1977 and was replaced by Dave Walker, formerly a member of blues rockers Savoy Brown. The band even appeared with Walker live on the BBC performing the song that would become “Junior’s Eyes.” You can hear the audio of the appearance below. I for one am not impressed.

Luckily Ozzy changed his mind just in time and accompanied the rest of the band to Toronto where they were scheduled to record their eighth album, which they would produce themselves. Never Say Die would definitely be a different kind of Black Sabbath album. It was their foray into the hard rock arena. The band’s 1975 album Sabotage had arguably been their heaviest, it was a beast, but they followed it up with a boring, at times proggy dud called Technical Ecstasy. As strung out and dysfunctional as the band might have been when they landed in Toronto I think they redeemed themselves with Never Say Die. Judging by the tone and style of the album the band seem to have, consciously or not, anticipated the advent of hard rock in the eighties. I’m not sure how calculated the move was but I think it was a wise shift in direction, away from Technical Ecstasy’s pop and prog leanings and toward the hard rock of the future. 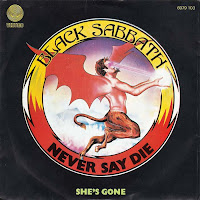 The album begins with a simple, driving rock tune, and a great one. The title track is as basic as the band would ever get, the song would almost fit on an album like Highway to Hell, I can hear Bon Scott singing it now:
People going nowhere, taken for a ride
Looking for the answers that they know inside
Searching for a reason, looking for a rhyme
Snow White’s mirror said “partners in crime!”
Next up is “Johnny Blade,” a cool riff driven rocker. The chorus is a bit of a let-down but I like the verse a lot, and the song is not that different from the kind of music Ozzy would be soon be making with Randy Rhoads, Bob Daisley, and Lee Kerslake.
Now we come to “Junior’s Eyes,” a rewrite of the song the band had worked up earlier in the year with Dave Walker. The song’s funky intro and verse are a bit odd but once the chorus explodes the song is hard to resist. I like it a lot. The final song on side one is my favorite on the record, and one of my very favorite Black Sabbath songs, “A Hard Road.” The song is unlike anything the band had ever done or would do in the future. Such a pretty melody which is woven beautifully into Tony’s tapestry of riffs. Is it wrong to call a Sabbath song “pretty?” But it’s such a nice song! Is it even more wrong to call a Sabbath song “nice?” But it’s just such a gorgeous…uh, okay, never mind. Hear for yourself.
Whenever I listen to “A Hard Road” I think of the song “Questions” by Bang, a rock band from Philadelphia who released three albums on Capitol in the early seventies.
Anyway…that’s side one, four songs, all either good or great. Flip the record over and side two starts off strong with another hard rock gem called “Shock Wave.”
That’s five songs, all good, at least three of them great. I’m guessing Ozzy had done a number of things by 1978 that he actually should have been ashamed of, but none of the first five songs on Never Say Die qualify, not even close. So what’s his problem? Well, there are three more songs. I’m not sure what’s going on with “Air Dance,” but it’s a rather unfortunate interlude. Most of the song sounds like Jefferson Airplane covering Joni Mitchell. Is that a glissando? In a Sabbath song? And the jazzy guitar solo? What the…turn it off! Please!
Okay, somebody should be ashamed of that song, but I’m guessing Ozzy had little to do with it’s creation beyond reading the lyrics for the first time as he sang them. Next up is “Over To You,” a rather simplistic, plodding rocker, kinda boring. Okay, really boring. It sounds like a Technical Ecstasy outtake. More glissando!? Where’s the melody? Ozzy is just singing the words over the music, it sounds completely unrehearsed, like a jam session. This song was definitely written and recorded in the same afternoon. The chorus is weak.
The album ends with a completely unnecessary Bill Ward vocal on “Swinging the Chain.” Not a great song. If it sounds like filler, swims like filler, quacks like filler, it’s probably…
So after “Shock Wave” the album takes a nose dive, and does not recover, but the first side is great and “Shock Wave” is killer. In my opinion “A Hard Road” alone makes this an album worthy of anyone’s collection. It’s a very pretty song, nice melody…there I go again. The song is hypnotic and charming. Par excellence. Iommi’s work on the first half of the album at least, really is top notch, especially on “A Hard Road.” Look, these days unfortunately sides don’t exist. All you need of Never Say Die are the first five songs. Most of you won’t have to flip anything over to hear “Shock Wave,” it’ll just come next. Then you’re done. Five songs and out. Enjoy. 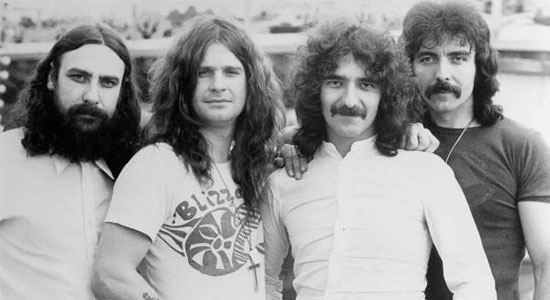