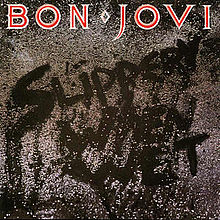 Since I am old fart, or so my Daughter likes to remind me, I remember a time very long ago. A time when Bon Jovi was actually a metal band! Now I know this comment is open to all kinds of argument and debate but lets look back at the facts. When they came out in the 80’s, Bon Jovi had all the accouterments in place. Long hair, aquanet hair spay, spandex, leather, loud distorted guitar, and great lead solos. The music was melodic and accessible but with an edge and let’s face it, they were not too far off from what Def Leppard, Motley Crue and Ratt were doing. Circus, Hit Parader and Metal Edge magazines were all over Bon Jovi and early on they the toured with KISS and the Scorpians. The way I saw it, Jon and the boys were a metal band, not in the vein of Metallica or Testament but a melodic pop metal band nonetheless. 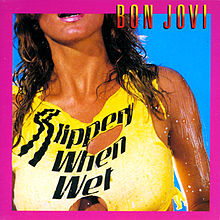 So as Aaron Camaro mentioned this week, what Bon Jovi needed to really make it to the big time was simple. To sound more Canadian!! With that in mind (or maybe not), Bon Jovi headed North to Vancouver to work on their third album with a Canadian at the board, producer Bruce Fairbairn. Six months later, the resulting piece of work was titled “Slippery When Wet”.  Released August 16th, 1986 and it would literally explode out of the gates shooting to number one on the Billboard Top 200 Album charts and catapulting Bon Jovi into mega stars within months.

Truly a pop metal masterpiece, Slippery When Wet sits among the “elite” rock albums of our time. Spawning hits “You Give Love A Bad Name”, “Living On A Prayer”, “Never Say Goodbye” and in my opinion, the crown jewel of the album “Wanted Dead Or Alive”. In 1986 the album could be heard blaring out of every high school parking lot across North America and these songs continue to be in regular radio rotation some 26 years later. 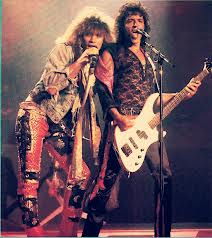 “Wanted Dead Or Alive” is an absolute classic. Jon tells the story of life on tour, relating it to the life of a cowboy. Lyrically it captures the sights, smells, and most importantly feelings of a rock n roll gypsy. You can imagine sitting on the tour bus, waiting hours just to get on stage and “rock them all”. Not since Bob Segar’s “Turn The Page” has a more descriptive picture of life on the road been painted. The vocal trade offs of Jon and Ritchie on this track still gives me goosebumps and guitar solo is nothing short of magical. Quite honestly, it ranks in my top ten rock songs of all time no question.

Unlike many of the albums of the era, “Slippery” really stands the test of time. Great songs usually do, but the production remains outstanding even by today’s technological standards. Knowing that the Decibel Geek was covering 1986 on this week’s episode, I made it a point to dig out this album and give it a solid listen start to finish. By the end of the first song I was writing this article, only stopping to air guitar through “Raise Your Hands”. Having heard the “hits” from this album a gazillion times over (not exaggerating as they are still overplayed on the radio and it seems that “Living On A Prayer” and AC/DC’s “You Shook Me All Night Long” are the only two rock songs that are allowed to be played in every Dance Club on Saturday nights) it was really great to hear the album tracks, “Let It Rock”, “Social Disease”, “Wild In The Streets”, hell every song on this album could have been a single. Like a fine wine this album has probably gotten better with age, 1986 was a very good year. 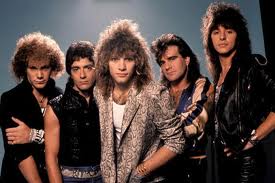 After reaching “superstar” status Bon Jovi would go on to record one more solid album, 1988’s New Jersey before sliding into a consistent career of boring albums full of sappy ballads and lifeless rock songs. Other than a few decent songs here and there, Bon Jovi post-1988 has yet to deliver a truly great rock album. So at a time like this, I am kinda glad I’m an “old fart” because I can remember a time when I was a teenager and got to experience Bon Jovi as a “metal” band, rocking the world’s stages behind one of the greatest albums of our generation. “You gotta let it rock”