CGCM readers may recall my review of Bonafide‘s Live at KB release just a short time ago. If not you can correct that using this handy link: Bonafide – Live at KB (Album Review).

In that review, I described the feeling I got during the listen. That of sweaty, whiskey smelling, steaminess that can only come from a small club show. You know the feeling. This album made me feel like it was all around me in my own home! Now I have experienced the real thing! Saturday, April 6 in Västerås Sweden BONAFIDE wrapped up their Live at KB tour. I was there!

Getting there was a little bit of a cluster. At one time there were 6 or 7 of us going, but after the escapades to discern how to return to Stockholm post gig and the follies of car rental, we were cut down to a trio. A Canadian (me), an Englishman and a Stockholm native Swede. Three amigos…ole! You see the gig took place in Västerås, an hour train ride outside of Stockholm. No worries. However, there seemed no late night return transit option. Finally, we discovered a bus departing at 2:30 am and arriving in Stockholm at 4:45 am. More than double the trip out. Hell-bent for Bonafide, off we set. 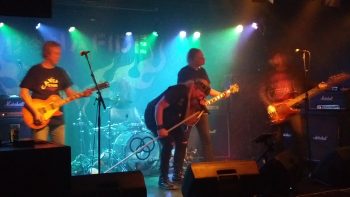 Club Rockers at Bankiren was a cool small/mid-sized club I would say based on my North American experiences. Facing the stage with a bar to the right and raised booth seating around the outside surrounding a “dance floor” the setting was quite intimate. The merch table situated on the right side between the bar and the entrance hallway drew our attention. Your trio of hell’s heroes made sure to thoroughly scour the options on display.

Opening the evening, the Wild Rosies took the stage around 11 pm (23:00). Exhibiting a great hard rock sound, I quickly identified that they were a cover band and from the local area. Perhaps even more local than I could imagine, as at one point Wild Rosies‘ singer sauntered behind the bar to serve himself a beer. Not missing a note btw during this procedure. The act really quite added to the “homey” feel of the place. I could easily drink here and rock to bands anytime! The highlight of Wild Rosies‘ set for me was The Four Horsemen‘s “Rockin’ Is Ma’ Business”.

BONAFIDE – Live in Västerås at Club Rockers at Bankiren 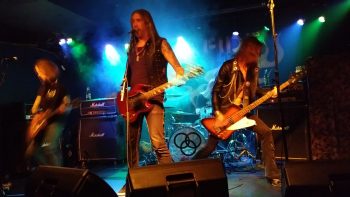 Wow…I thought Bonafide ripped on the live CD, but now…holy shit! What a gig! I leave totally spent and thoroughly soaked in sweat. Exhausted from the experience. And just like sex, I wasn’t involved in the performance…lol.

As I positioned myself near the stage in all of my beered up headbanging glory, the smile was widely evident across my ugly mug during the opening number. The band sounded great and I absolutely loved singing along to some of my favourite Bonafide cuts like “Dirtbound”. Simply awesome to experience this one live. Throughout the set, I kept waiting for two of my top Bonafide songs to be ripped out from the stage. “Hard Living Man” and “Peg Legged Pete”. 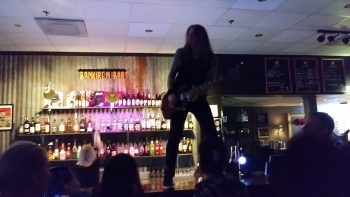 With innovation at it’s strongest, in order to slightly extend the Club Rockers at Bankiren stage and for Bonafide to reach the crowd just a little more on a personal level, a road case was employed. The lengthy rectangular case on wheels originally sat parallel to the stage, but before long the assistance of Wild Rosies vocalist saw it swung out perpendicular creating a short catwalk into the crowd. Right in front of me no less! Several of the band made use of this case which was each time securely held in place by the Wild Rosies singer. Safety first!

At one point Bonafide vocalist/guitarist Pontus Snibb vacated the stage to play guitar up on the bar Coyote Ugly style! Always fun to watch gimmicks like this and I cheered along for every second of it. Finally, after a brief respite, I was rewarded with “Hard Living Man” during the encores. Unfortunately no “Peg Legged Pete” though, but no matter, still an excellent show.

Meeting Bonafide After the Show 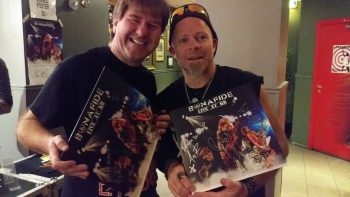 At the show’s conclusion, we descended upon the merch table, knowing full well the band would be there. Unfortunately, they only accepted cash or SWISH. Which I found super annoying. This whole damn country is heading more and more into the “card only” form of payment and it’s nearly impossible to find anywhere accepting cash. So I didn’t have any. And SWISH is some sort of phone payment, not sure if it’s just a Swedish thing, but certainly a Canadian doesn’t have it. With the help of our native Swede tour guide (babysitter), the Englishman and I were able to scrape up enough cash and SWISH (to be repaid later) to purchase each a copy of Live at KB on vinyl. 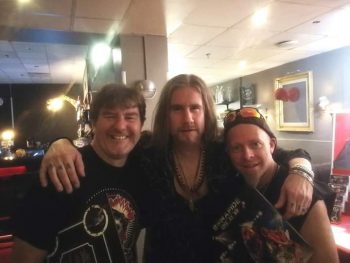 After ripping off the cellophane wrappers, we had our newly acquired albums autographed by Bonafide. It was great to chat briefly with the band and even better a few moments later when Pontus Snibb snapped a personal photo with us both. We chatted for a few moments about the show, the band, basically idle chit chat in which I believe we dumped out many accolades on the awesomeness of tonight’s gig.

While I was excited, all the way from Canada for my premiere Bonafide experience, I felt I was quite well behaved. A couple of other crowd goers did not seem so, in what I thought was mildly disrespectful to the artists on stage. One guy continuously seemed to be shoving his camera in the band’s faces. Let’s face it, the stage was not that highly raised off the dance floor. To me, it seemed a bit much. Another gentleman had a full on flash brightly shining as he filmed the band from like a foot away! 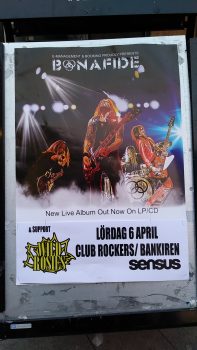 I know we are living under the curse of the digital age in this respect and I myself am happy to take crappy cell phone photos (seen in this article) and sometimes videos at a show but have some respect to the band. To their credit, the members of Bonafide seemed unphased, so maybe I’m just over sensitive in that area.

With all the fears (mostly by those who declined attendance in the end) of having a lengthy time wandering Västerås in the middle of the night awaiting this 2:30 am bus home, we left Club Rockers at Bankiren at about 2 am! Just enough time to find our way back to the bus depot. Perfect. We boarded the bus and each chose a separate seat. I’m told it was quite “special” how as I nestled down into the seat that I made a perfect (and very quick) transition from singing the Four Horsemen‘s “Rockin’ Is Ma’ Business” into snoring.