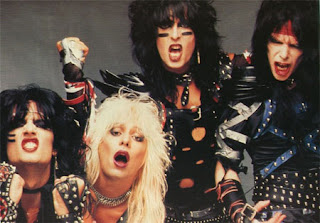 When Chris and AAron told me about the Motley Christmas show, I was thrilled. I couldn’t think of a better Christmas gift for a total Cruehead like myself. So as I am listening to this weeks podcast, I decided to share the story of my very, VERY first concert. Yes that’s right Sixx, Lee, Mars and Neil took my concert virginity a long, long time ago.

Rewind to spring of 1984, my friends and I are have dove head first into everything Heavy Metal. Def Leppard, Kiss, Quiet Riot, and of course MOTLEY CRUE are all we are listening to. Trips downtown to buy cassettes and t-shirts were weekly outings and many hours were spent reading the pages of Hit Parader and Circus magazines trying to learn more about our guitar wielding heroes.

Motley Crue had been on the road opening up for Ozzy but their popularity was growing fast. With a few days off on the tour they decided to book some headlining shows.

Then it happened, there in the concert listings of Circus magazine read the words “Motley Crue” – Toronto June 10, CNE Coliseum. As my buddy Scott and I walked to school I told him what I had read and without hesitation he boldly announced he was going to get tickets and “did I want one?”

I laughed at him and said “if you can get tickets, then I certainly want one!” I laughed again “c’mon this was never going to happen”, Scott never had any money, his parents were way more strict than mine and besides concerts like this always sold out in mere minutes so there was no chance we were getting tickets to see the Crue. 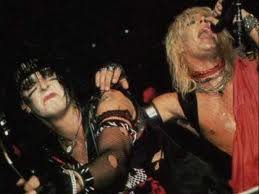 Was I in shock a few days later when Scott informed me that I owed him 15 bucks for my Motley Crue ticket and proceeded to hand me my yellow ticketmaster, ticket to “paradise”. My hands were literally shaking at the thought of seeing Motley live, adrenaline coursed through my veins and then suddenly my joy turned to panic as I suddenly realized my parents might not allow such an evening to transpire. I mean, hell I was only 14 years old! This was going to take some serious teenage maneuvering.

Scott and I discussed my “strategy” before I approached my parents. Scott’s Dad was going to drive us to the show, wait for us and then drive us home. This was perfect because my Dad would never have drove to Toronto.

So I pleaded my case to Mom and Dad and ensured them that Scott’s Dad was taking us to the concert (not a lie). I just may have forgot to mention that he was waiting outside and not actually attending the show with us (details, details). To my surprise it was a go!

The show was a Sunday. It was worse than Christmas as we counted down the days and hours before we would see the Crue. Sunday morning I was over at Scott’s house ridiculously early and we sat in his backyard listening to the Crue cassettes wondering what we would soon get to hear, LIVE!

I remember driving along Lakeshore Blvd. in Toronto and seeing the marquee sign read “Tonight Motley Crue/Accept”.  Accept what was that? Our tickets said that Saxon was the opening band? That was actually good news as neither of us had ever heard Saxon, but Accept had a pretty cool song “Balls to the Wall” that we were already familiar with. Bring on Accept! 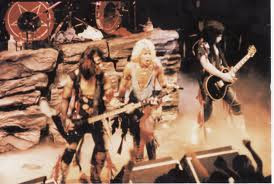 The concert was general admission so by the time we rolled up to the lineup at 2 in the afternoon we were quite a ways back in the line. Wow what a site, spandex, leather, studs, tattoos. We were not in Kansas anymore Toto. We spent the afternoon attempting to fit in and look as cool as two 14 year old kids (and Scott’s younger brother Glenn who was all of 12 years old) could look.

When they opened the door we made our way into the building deciding to get a decent vantage point up in the stands as the floor seemed a little too scary of a concept. Grabbing some decent seats we sat down as excited as I have ever been in my life.

When the lights went out and Accept hit the stage it was LOUD. Ear splitting, oh my god that hurts kinda loud. It took the better part of the first few songs before my ears adjusted and I witnessed Accept burn through a blistering metal set. It was all unknown music except the last song but it was raw, powerful and loads of fun.

The houselights went out and the smoke machines were turned on and the familiar voice of “Allister Fiend” came through the PA, “In the Beginning….” Holy Shit we were in the same building as Motley F’n Crue! and they launched into Shout at the Devil with smoke and pyro and leather and studs! For the next 90 minutes we screamed along to every word as they played most of the songs from their first two albums. They were everything we saw on TV, larger than life rock gods and for three young kids experiencing their first rock concert, it was out of this world.

Nikki Sixx instantly became my hero. The way he owned the stage and beat on his bass he was so cool. I made up my mind that day that I wanted to play the bass. By the time we got home plans were underway to form our own band and take on the world! 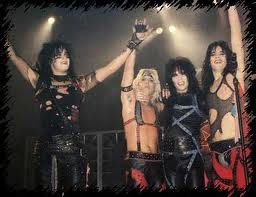 Getting to see Motley Crue in a small arena just as “Shout at the Devil” was taking off was amazing. They were young, hungry and totally insane. They were a “gang” before the drugs and egos and success. It was Motley Crue at their best and a concert that is forever burned in my memory.