Gazing into the CRYSTAL BALL (Interview)

After my recent review of the new Crystal Ball CD Déjà-Voodoo and last year’s review of Liferider, I was able to set up an email interview with the band through Massacre Records.

Crystal Ball started back in 1999 with their first release and now 9 albums later they answer some questions for Decibel Geek.

Déjà-Voodoo is the 3rd album with singer Steven Mageney and bassist Cris Stone and the first album with Tony “T.C.” Castell on guitar. Tony joined after Liferider was finished.

1 – After the 2007 album Secrets we didn’t hear from Crystal Ball ’till 2013’s Dawnbreaker. Scott and Marcel – what did you both end up doing during those lost years?

Scott – After the 2007 record Secrets many things went wrong and took away a lot of our motivation. Cancelled tours, changing line-up, business-trouble, etc. So we said, fuck it. Let’s take it slow for a while. We had the chance to have a private social life again, which was almost not possible for years. We needed to regain the fun and energy to continue at this pace.

2 – You have gone through a few lineup changes over the years but the vocals always seem to be the big change. With Mark Sweeney gone after the 2007 release, how did you end up bringing Steven to the band?

Scott – We wanted to pick it up again in 2009, but it felt odd. Our ex-singer had different goals than the rest of the band. So he left in 2010 and we started to look for a new singer. It took us 2 years to find Steven and another year for the writing and production of the Dawnbreaker album. We got in contact through Facebook by accident. I guess it was destiny.

3 – Markus Flury did guitars on the Dawnbreaker and Liferider CD. Can you tell me about the change bringing in Tony to the band and how did you meet up with Tony? Did Tony play on the Liferider tour?

Scott – Markus was very busy in his job as a guitar teacher in public schools. He had a lot of obligations so he didn’t have enough time for Crystal Ball anymore. We regret his decision, but we had to move on. It took quite a while to find the right replacement . When I finally remembered that Tony (who I knew for a long time) was actually a guitar player, even though he is mostly known as a bass player for Krokus and Fox. So I asked him to join and after a first meeting and rehearsal, everything was clear. He played all the shows of the LifeRider tour.

4 – With lots of positive reviews from around the world including from myself, how were sales for Liferider?

Scott – Yes, we got a lot of positive reviews and we were able to increase the sales of LifeRider album, compared to the previous one: Dawnbreaker. And this although the business is going down the drain. This shows us we’re moving in the right direction.

5 – Now going with Déjà-Voodoo – I see lots of amazing reviews for this release as well. Can you tell me how you came up with the idea for the title track, and who does the songwriting – or is it shared?

Scott – I came up with the song Déjà-Voodoo. At first, we had a different album title but changed it to Déjà-Voodoo, because it was way cooler. Most of the time I come up with a song idea (sometimes it’s raw, sometimes it’s almost finished) and I present it to Steven and he comes up with his ideas for the vocals. On this record, Tony also contributed 3 songs (of many more he had written) and I’m sure there is more to come from him. He has a lot of ideas. On this record, we also have Stefan Kaufmann (ex-Accept, ex-U.D.O.) as a co-writer for two really great songs. A lot of lyrics are co-written by Steven and me, some by Cris and me.

6 – Where did you write the material for the Déjà-Voodoo and where was it recorded?

Scott – We wrote it in our home studios and recorded it in Solingen (Germany) with our producer Stefan Kaufmann (ex-Accept, ex-U.D.O.).

7 – With Liferider you did a duet with Noora Louhimo of Battle Beast. Without the actual CD in hand yet, are there any other guest musicians or vocalists on the new album?

Scott – Our producer Stefan Kaufmann (ex-Accept, ex-U.D.O.) played the guitar solo on “Home Again”  and sang backing vocals on “Without A Net”. This came kind of naturally because we were working together. Of course, it’s great to have him on the record since Accept and UDO were influences for us too.

8 – This is your 3rd release on Massacre Records. How did this connection come to pass?

Scott – We were looking for a partner that believed in us and treats us a priority band.

9 – Can each of you tell me your favorite song on the new album?

Steven Magney: “To Freedom and Progress”

Cris Stone: No, I cannot (I like every single one just the same)!

10 – You are doing a tour with Shakra throughout Switzerland and Germany. Any plans of touring outside these 2 countries or even better – outside of Europe?

Scott – There might be some more shows next year. I think it depends on how the tour goes and what other possibilities will come up until then. Outside of Europe is not very likely at the moment. So far there are no offers that I would know of for such a tour or show. But we’d love to do more of that.

11 – What was your first concert, and if there was one band or artist you wish you could see or could have seen who what that be?

Scott – My first “real” concert was Status Quo on their In the Army Now tour. I wanted to see Bon Jovi a year before that, but my parents wouldn’t let me go ;-(. I wish I had seen Queen with Freddy Mercury once.

12 – Now for a fun question, any embarrassing moments on stage that any of you care to share?

Scott – We were once trapped in the dressing room. The doorknob fell off and we couldn’t get out. That was back in the day where cell phones were really rare and new. Luckily we had one. So we had to figure out the number first and call the club owner to set us free 😉

I want to thank the guys from Crystal Ball for taking the time to answer the questions and maybe one day I will be able to see this amazing band live. In November Crystal Ball will play live as they open up for fellow Swiss mates Shakra on their upcoming tour. 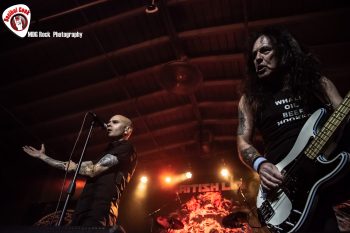 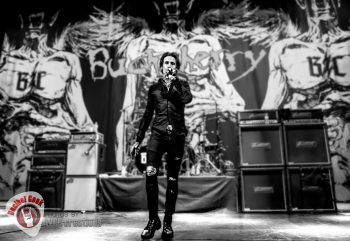 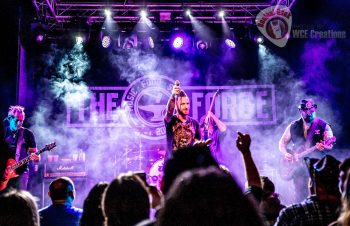