Cure Me or Kill Me – Gilby Clarke has the Cure! 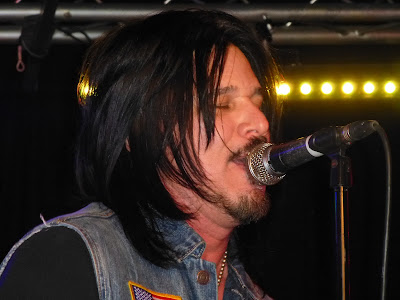 Well, seeing as my partner in crime is currently sailing the ocean on the “Monsters of Rock” cruise, I decided that he shouldn’t have all the fun. Tonight I was off to the The Rockpile in Toronto to see the re-scheduled “Bulletboys” concert that was cancelled on us back in January, only one problem. They cancelled again! This time they pulled the plug with enough time for a suitable replacement to be found. Suitable probably isn’t the word, “Monster of Rock,” GILBY CLARKE stepped up and headed north with Les Paul in hand and Toronto was in for a treat.

Unfortunately, as I spent the early part of the day at work I was bitten by the cold bug that is going around. So by the time I got home from work I was feeling much like a warm bag of steaming poop. I loaded up on some cold meds, grabbed some kleenix and throat lozenges and headed out the door. There was no way a cold was ruining this evening, it was time for a little rock n roll.

As usual we were treated to a number of local supporting acts most of which I have seen before. Reverse Grip, The Dregs, and In A Cannon all delivered the rock in style but the first band on the schedule was a new name for me. A name I need to share… 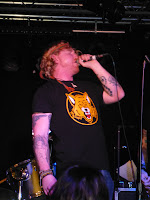 Riding Shotgun hit the stage around 8:15 and this new band flat out kicked me in the teeth. It’s tough for a band playing completely unknown originals to totally knock my dick in the dirt but these guys are the real deal. Heavy, catchy tunes reminiscent of old Black Sabbath. these guys can play and vocalist Crash Harris has a set of pipes that could really move these guys forward. Their set included a mix of songs from their 2011 EP “Buckle Up” and some new songs from their upcoming Gilby Clarke produced album (due this fall) topped off with a killer heavy cover of “This Flight Tonight” (Joni Mitchel, Nazareth). This writer was impressed enough to head home after the show and immediately purchase the Buckle Up EP on Itunes, now I will anxiously await the new material to add to the library. 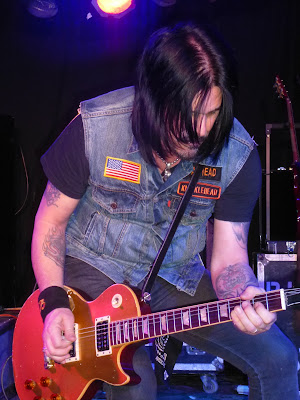 The last time I saw Gilby Clarke live was at CNE stadium as he toured the monster stages of the world with Guns and Roses and tonight the Rockpile was in for a treat. Gilby is truly a musicians musician, have guitar will travel and he seems to truly love what he does. That to me makes for those magical moments on stage when a performer can take you away with his music. Few artists have that power Corabi has it, Traci Guns has it and Gilby Clarke definitely has it. 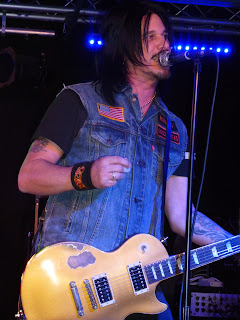 Of special note Gilby recruited one Sean Kelly to play bass for him this night and for Toronto fans this was especially cool. Sean is pretty much a music “legend” up here in these parts. His band Crash Kelly have released three killer albums “Penny Pills”, “Electric Satisfaction” and “One More Heart Attack” and they have opened for the likes of the Black Crowes and Alice Cooper. From there Sean joined Helix on bass guitar in 2009 and helped co-write their “Vegabond Bones” album. From there he was recruited for Nelly Furtado’s guitar slot and he played his first show with her in Mexico with an audience of 165 000! To have Sean on bass tonight, rocking the bass was an extra special treat, I am a big fan.

Gilby, Sean and drummer Dave “Bam Bam” Languuth took the stage around 11:30. I found a spot close to the front as I felt this had the makings of a great night of rock n roll. Gilby is a monster on the guitar, not a “shredder” he plays with feel and emotion and means every note. After the first three numbers he introduced Sean Kelly on Lead Bass and broke out GnR’s “It’s So Easy” and the crowd came alive. Gilby has some killer material to choose from, “Black” was excellent and the song introduced as a song from “everyone’s youth” led into “Knockin on Heaven’s Door”. Gilby even pulled out a Rockstar Supernova track with “Be Yourself”. The band sounded great, it was hard to believe that Sean Kelly was playing a show in Switzerland the night before and flew in that morning for Gilby’s show. 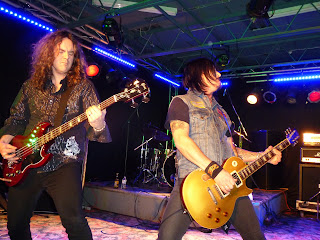 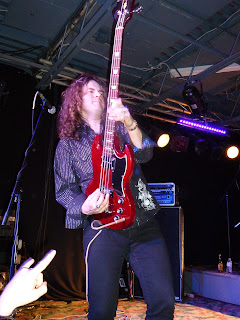 The highlight for me was “Cure Me…Or Kill Me” with Gilby and Sean riffing at center stage. That song alone was worth the price of admission. Some Rolling Stones were covered with “Dead Flowers” and the set officially ended with a call for tequila and Gilby’s “Tijuana Jail”.

The band were treated to some well deserved shots on stage and they decided to throw in one more song while the alcohol hit the system. Gilby asked the crowd of he could turn the microphone over to Sean, and they kicked into T Rex’s “20th Century Boy”.

My cold be damned! I say Jack Daniels and live Rock n Roll was good medicine for the soul. As Gilby wrote “cure me or kill me”. Now pass me a lozenge m/!