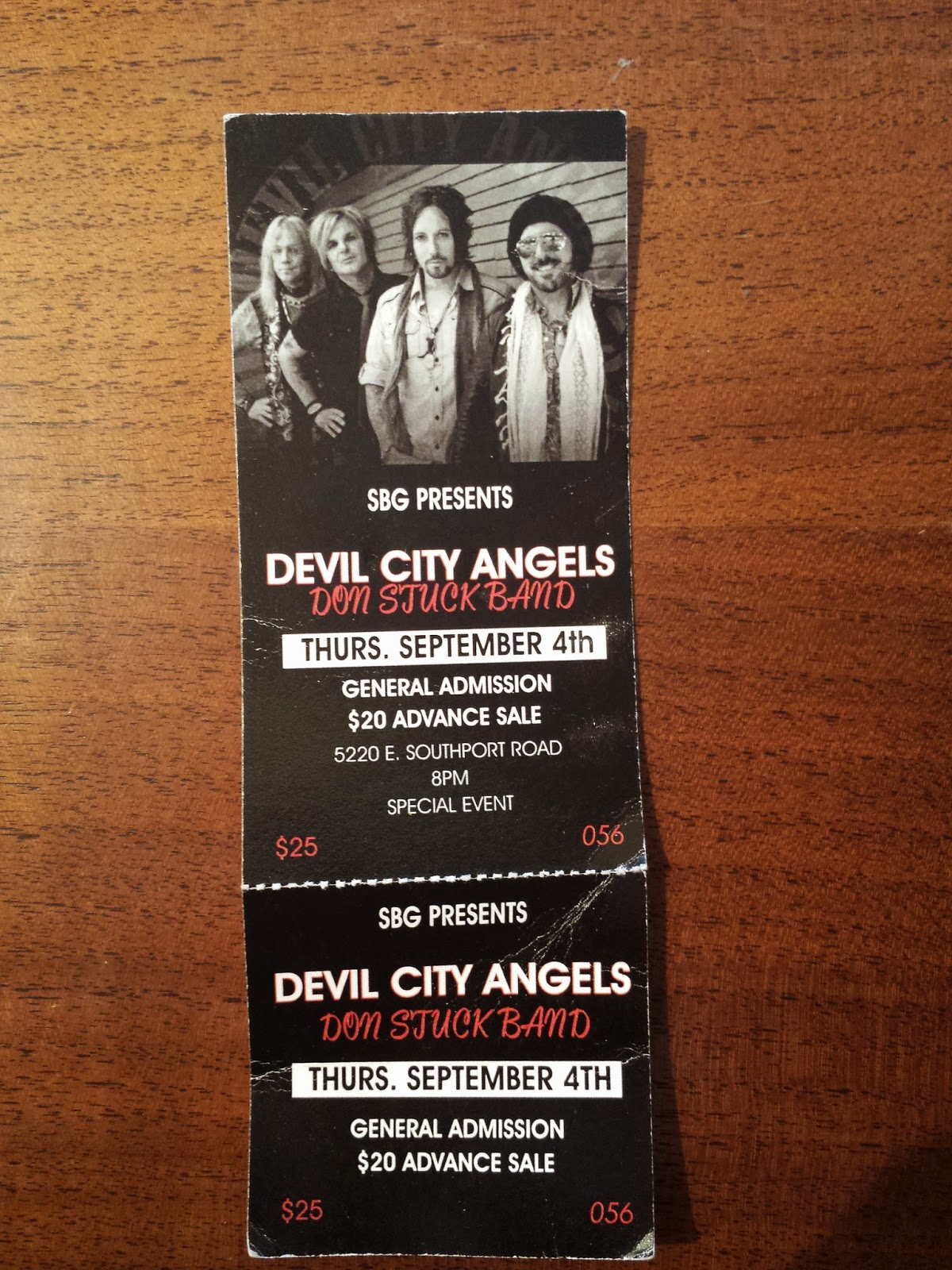 Devil City Angels, the latest “Supergroup” played their very first show on (9/4/14) at Southport Bar & Grill in Indianapolis,IN. The band is made up of… 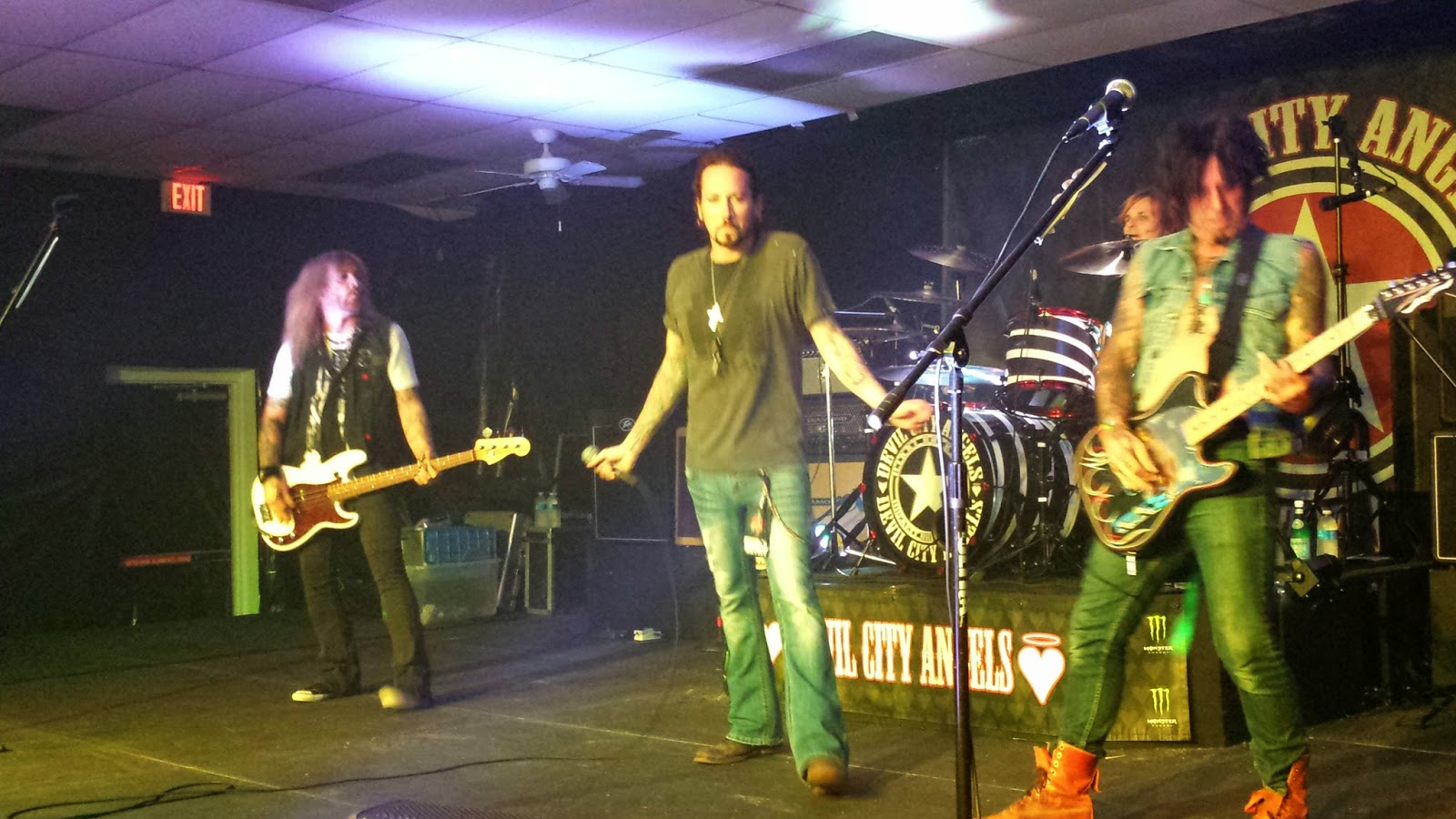 I usually do not get too excited when I hear about some of my hero’s from the 80’s hard rock scene getting together to form a new band or “Supergroup”. It usually ends up falling apart as fast as it came together or they put out one album followed by zero tours or live shows..(ie. KXM). In this case it seems to be just the opposite, the Devil City Angels have hit the road having only released four songs through their Reverb Nation page but with a back catalog of songs by their respective bands, what else do they really need? 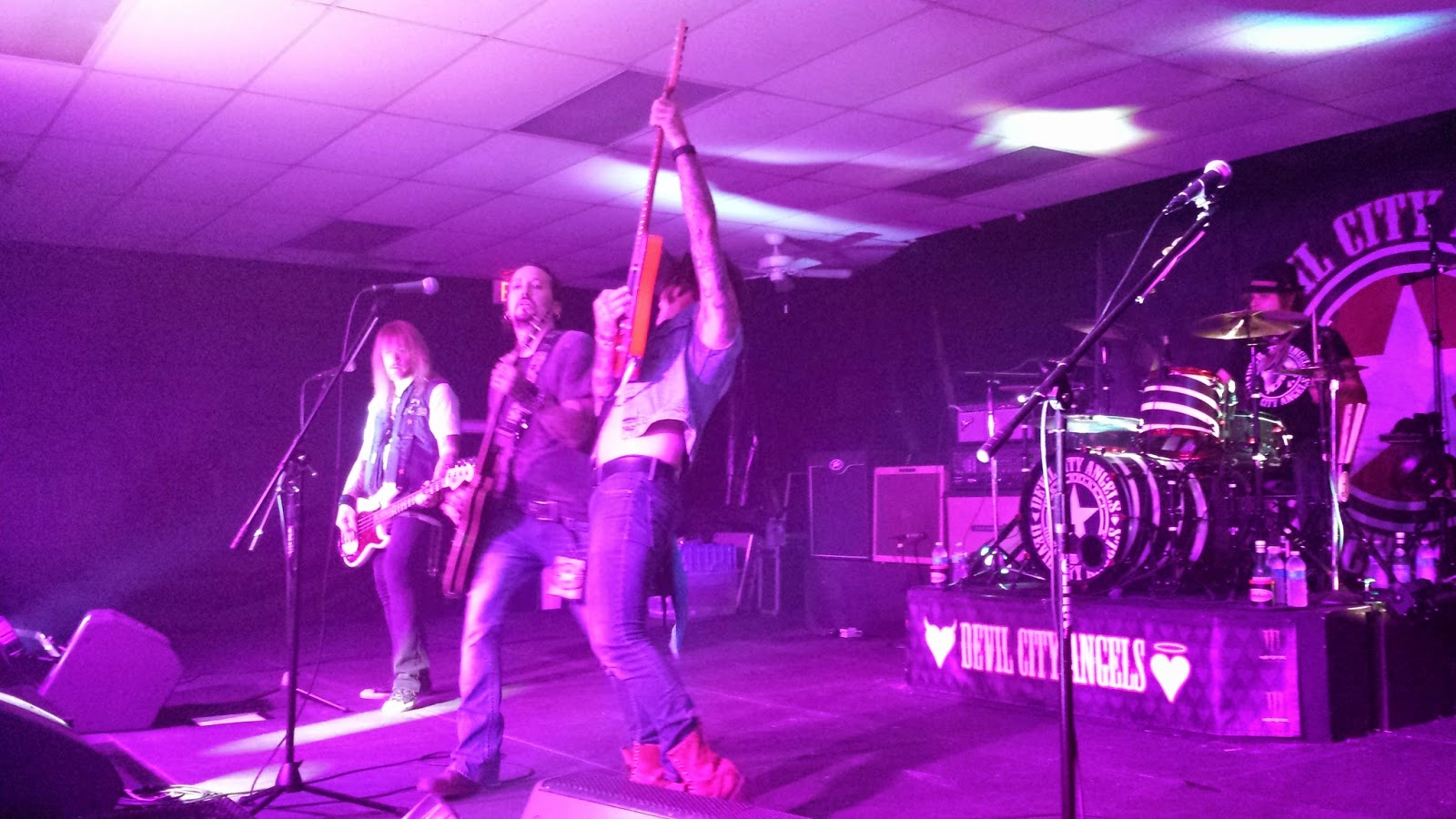 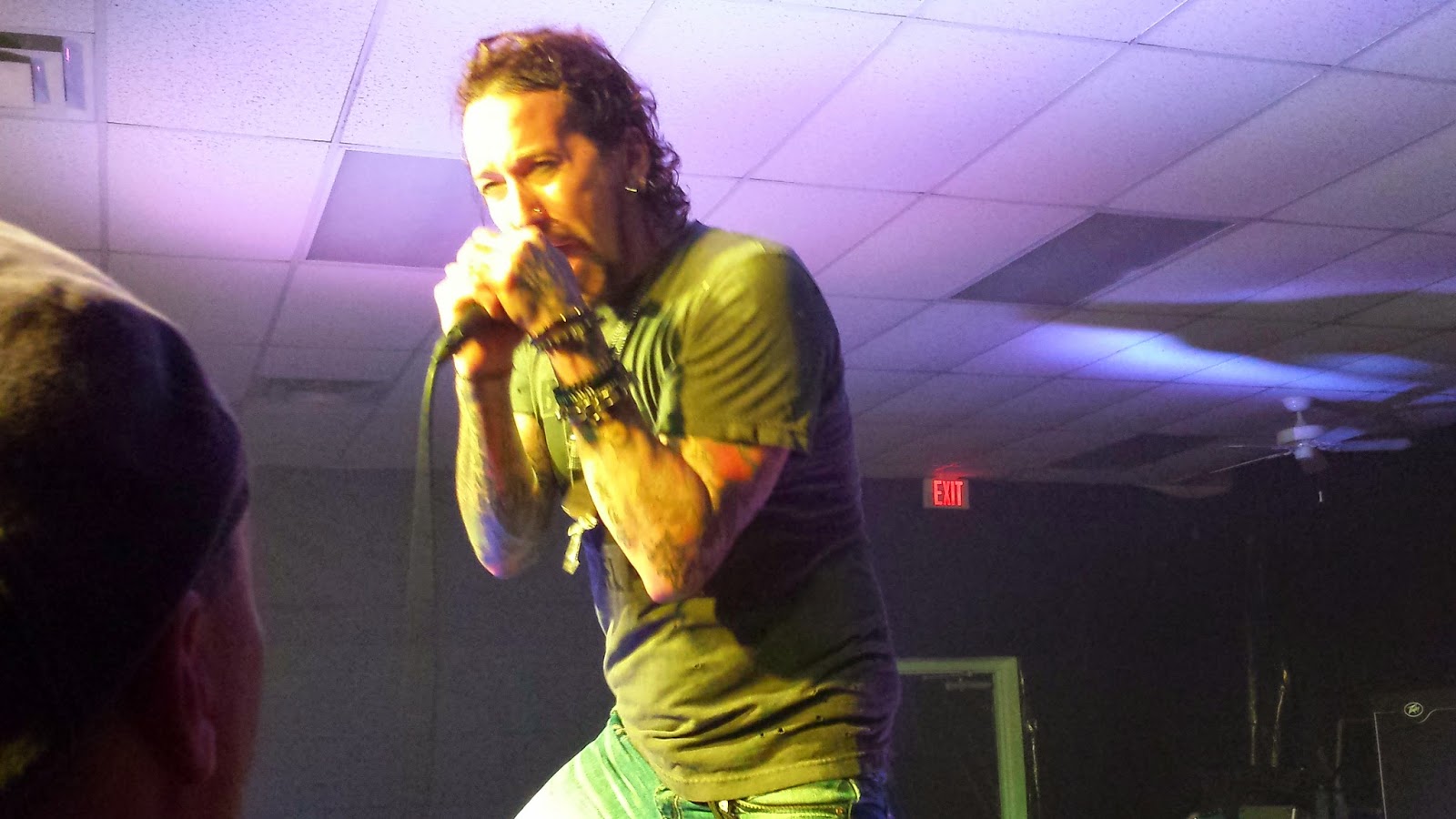 So, let’s get to the show shall we? My buddy Scott and I decided to make the drive up to Indianapolis,IN from Louisville,KY to catch the show. The venue is a decent sized sports bar and as of late has been booking some pretty cool shows. I made the trip up back in May to catch an unplugged John Corabi show so I was excited to return to the venue and see the Devil City Angels. For this to be the very first Devil City Angels show the band DID NOT disappoint! Heading into this show all that most people had heard were the 3 or 4 tracks that the band has up on their Reverb Nation page. All of which were played along with such classic 80’s Hard Rock hits as “Never Enough” by L.A. Guns, “Gypsy Road” and “Nobody’s Fool” by Cinderella and “Talk Dirty to Me” and “Nothing But a Good Time” by Poison. The stand out song of the night for me was “The Ballad of Jayne”…that has always been one of my favorite songs and finally being able to catch Tracii Guns playing it live
was well worth the $20 cover charge. 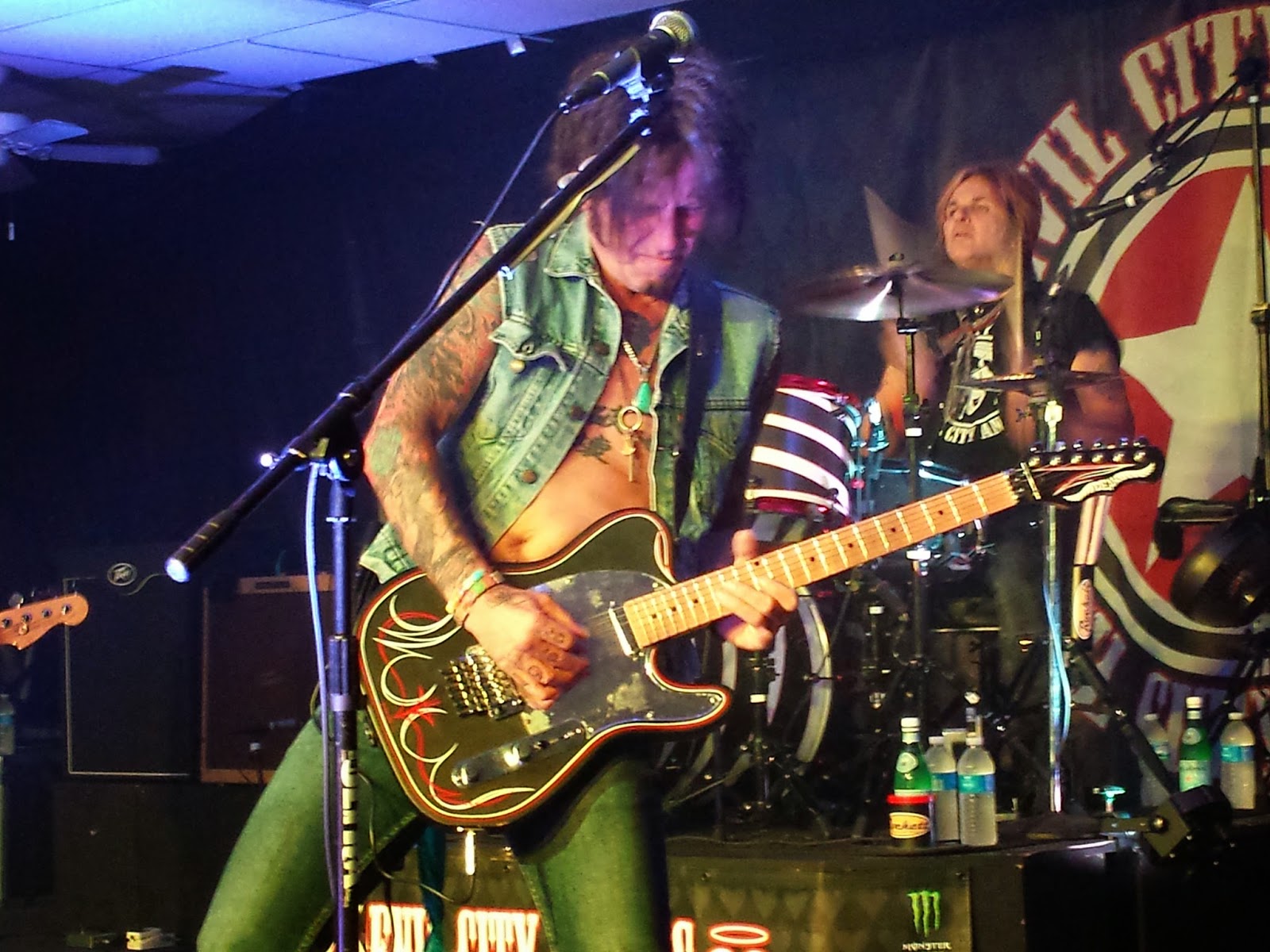 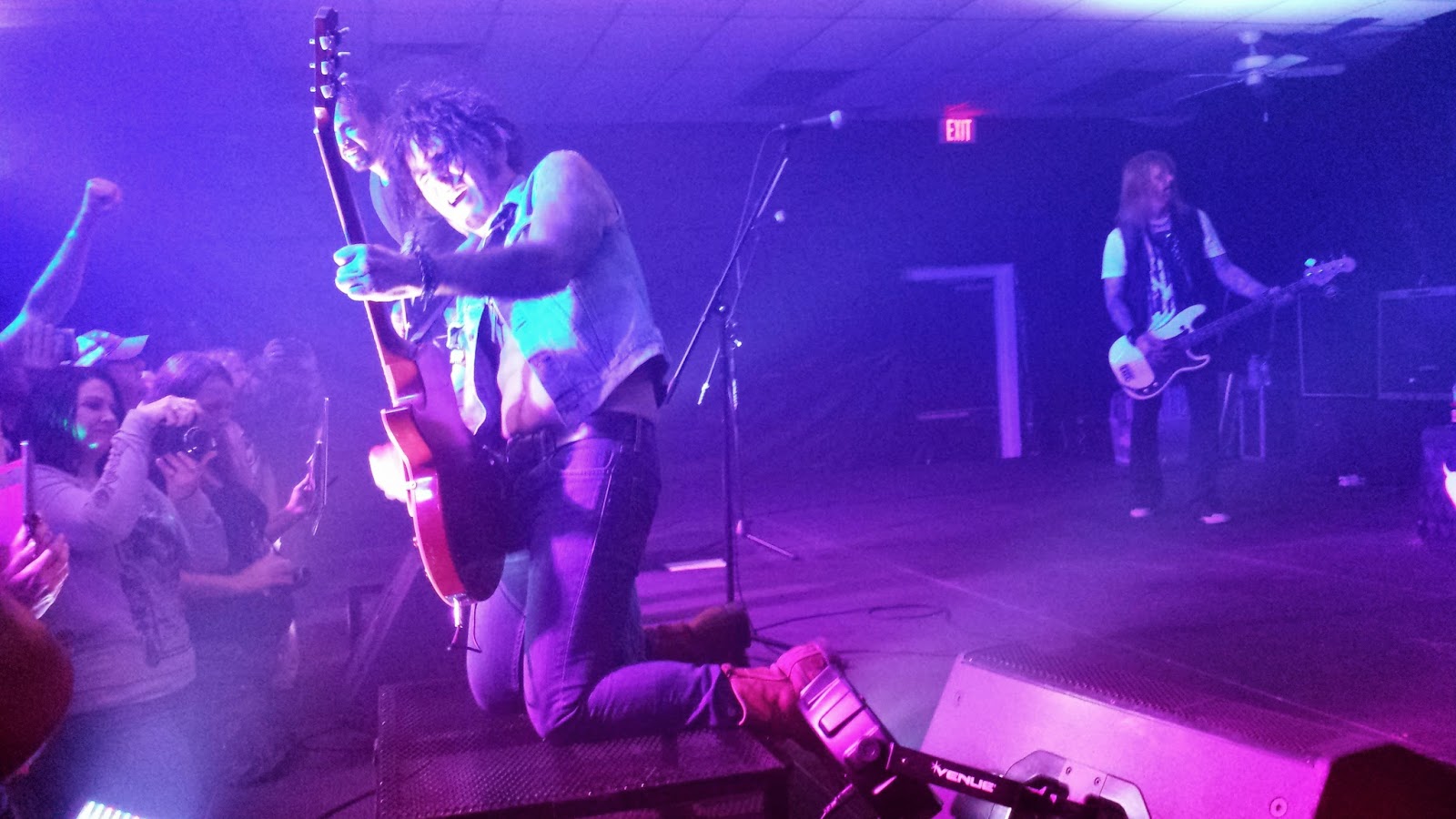 I really do not know anything about vocalist Brandon Gibbs’ history but the dude is a pretty solid front man/performer/guitar player and had zero trouble covering the material from the other members respective bands with the exception of maybe Cinderella. Something just didn’t seem to fit vocal wise but in all reality, who can really sing like Tom Kiefer? No one, that’s who! It wasn’t “bad” just different.  Moving on to Tracii Guns, I truly believe Tracii is a very underrated guitar player and seeing him play live just re-enforced that thought. Tracii often broke into some bluesy guitar licks and blistering leads that breathed some new life into some classic songs! 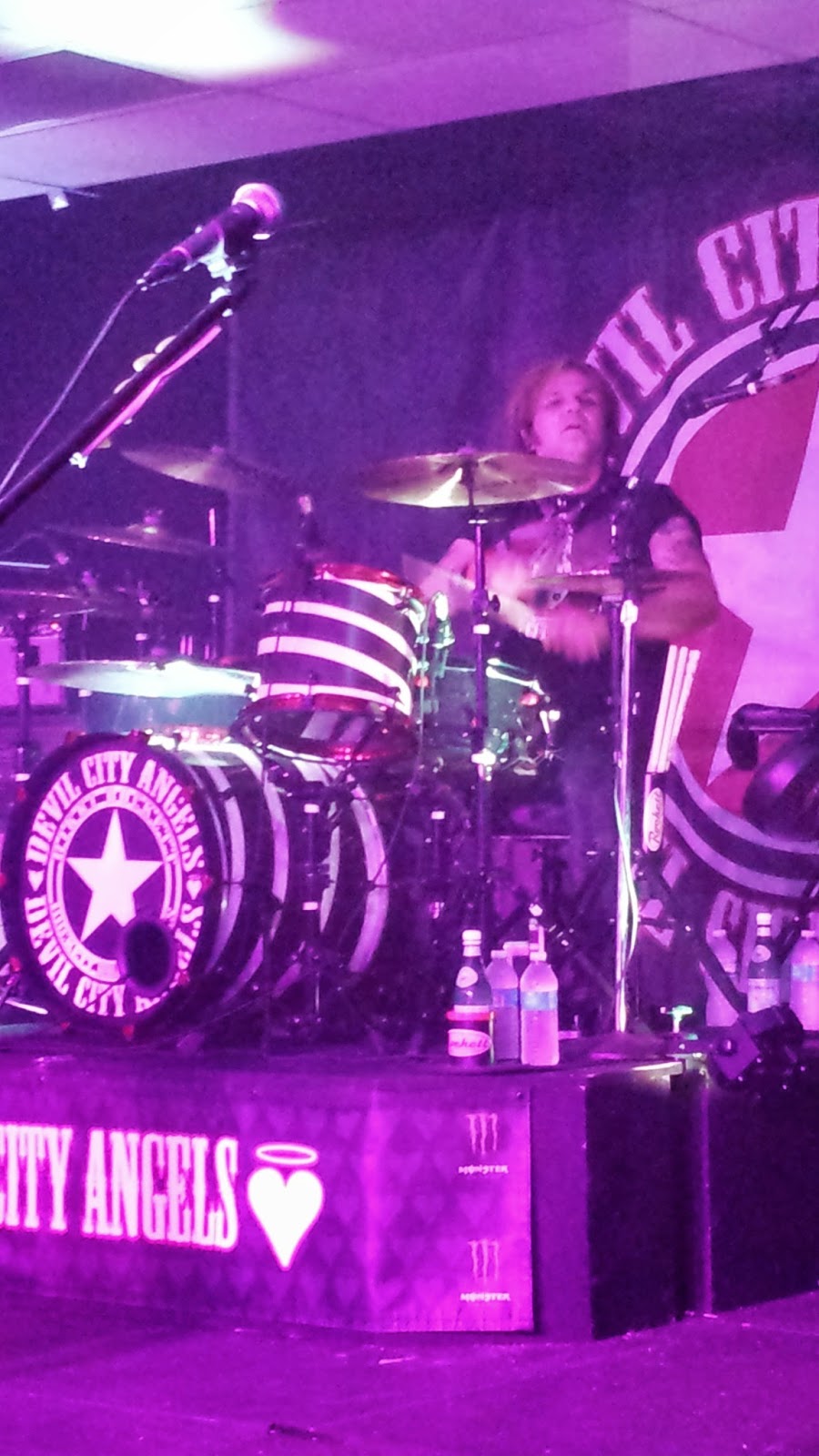 Rikki Rockett, has never really been considered the most technical  drummers out there but he sure seems to be every bit the showman he has always been and was certainly entertaining to watch, not to mention being a pretty nice guy as well. This was my first time seeing Eric Brittingham live as I never got a chance to see Cinderella back in the day. Eric seemed to be a solid bass player. Eric’s bass playing added with Rikki’s beat made for a rock solid rhythm section.

Now, to take a quick trip into “Negative-ville” for a minute, let’s get to the “Meet & Greet” shall we? The Devil City Angels offer a Meet & Greet package for $50 That does not include the ticket price. I am REALLY not a fan of paying to meet someone. In this case I had a few classic LP’s from my collection that I wanted try to get signed so after exhausting all efforts of contacting the Angels and the venue for some press credential’s to no avail, I gave in and paid the $50. Was it worth it? Not really. Don’t get me wrong, it was cool to shake the hand of one of my favorite guitar players, but seriously, is a hand shake really worth $50? Not to me.

Once the V.I.P. members were let into the room for the Meet & Greet we were told that the band WOULD NOT sign anything EXCEPT for the “pre-signed” band photo. One by one we were lead up to the band like we were getting ready to sit on Santa’s lap for a group photo then quickly ushered out of the room. I am only adding this in here to help you make up your mind about purchasing the V.I.P. package. Personally, I would like to have my $50 back but hey, you might think it is worth it! You do get a pretty cool “Devil City Angels” tour pass though (pretty sweet for a collector), a “pre-signed” picture of the band and 1 picture with yourself and the band (as long as you have your own camera or phone). Still not worth $50. Just my opinion. You do what you want. No “shooting the shit” here just, “Hi, say cheese, bye”. Save your $50 for something else. Seriously.

With all that said, please do yourself a favor and check out the Devil City Angels if their tour rolls through your town. Just save your extra $50 for beer. 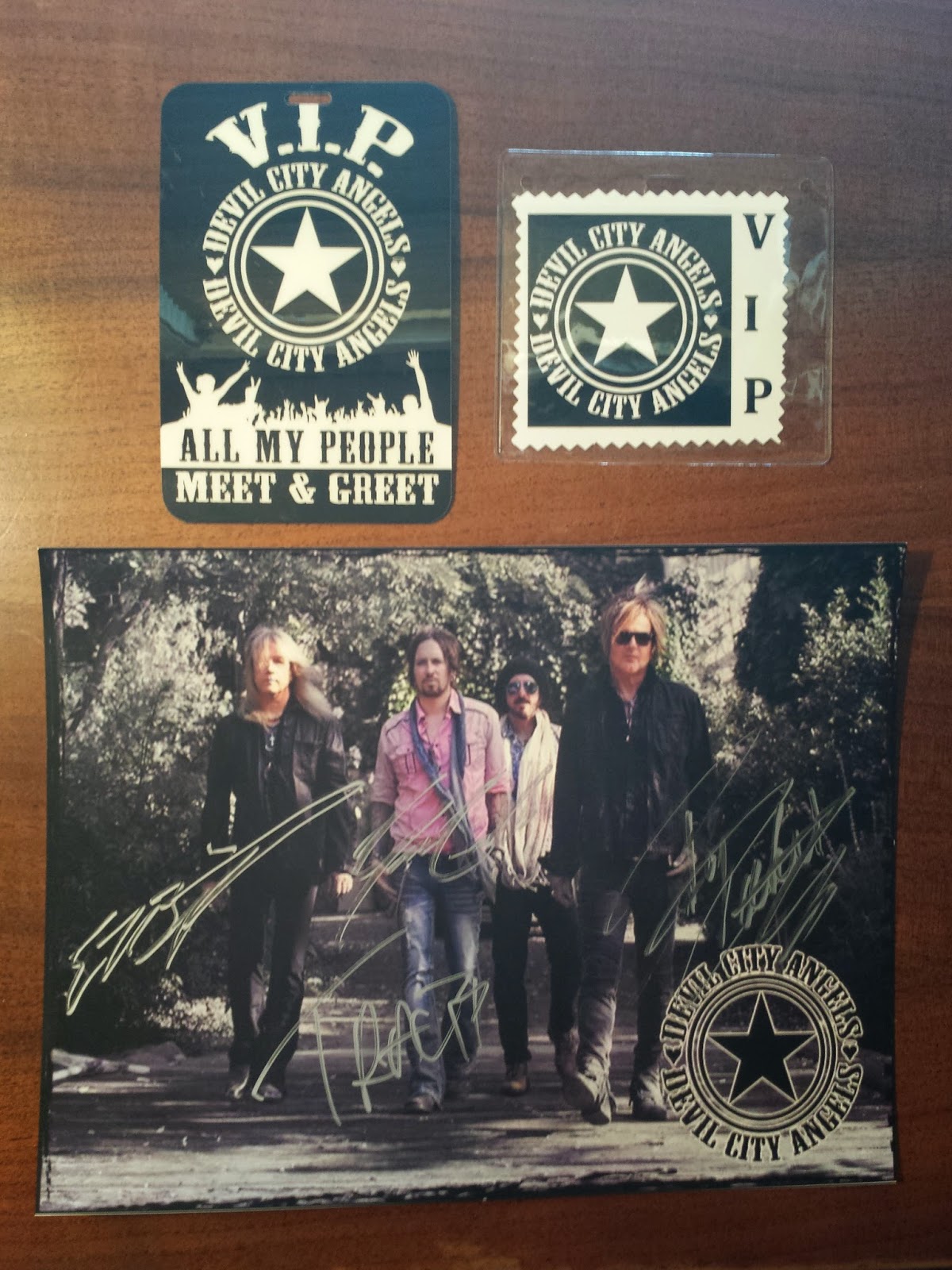 If in the Indianapolis area or within a couple hours drive you should definitely check out Southport Bar & Grill. Have to hand it to them for bringing these shows to the region and supporting all the 80’s Hard Rock bands that we all love. Check their website for upcoming events…. 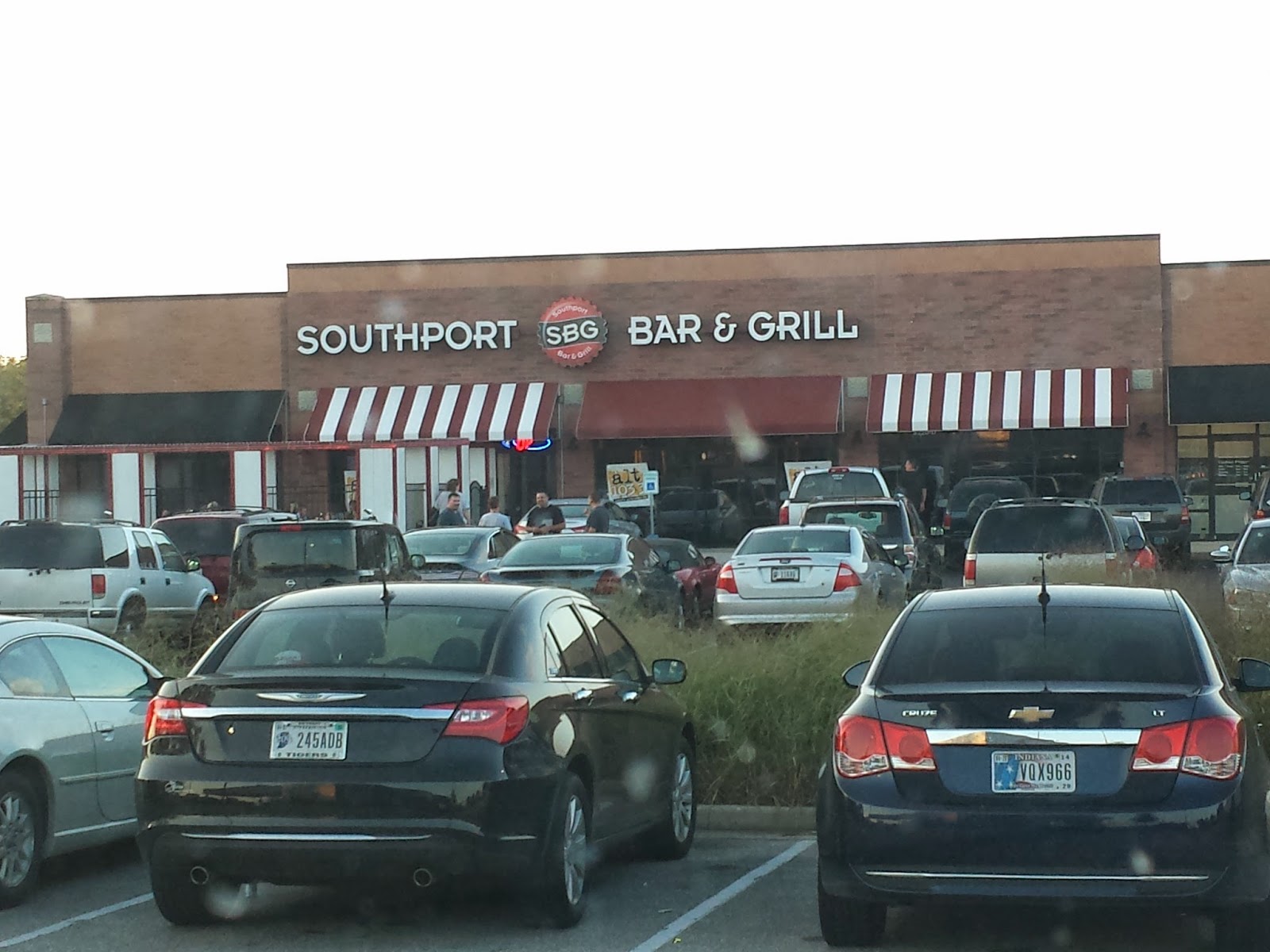 Be sure to swing by the Devil City Angels Reverb Nation page and give them a listen.
https://www.reverbnation.com/devilcityangels 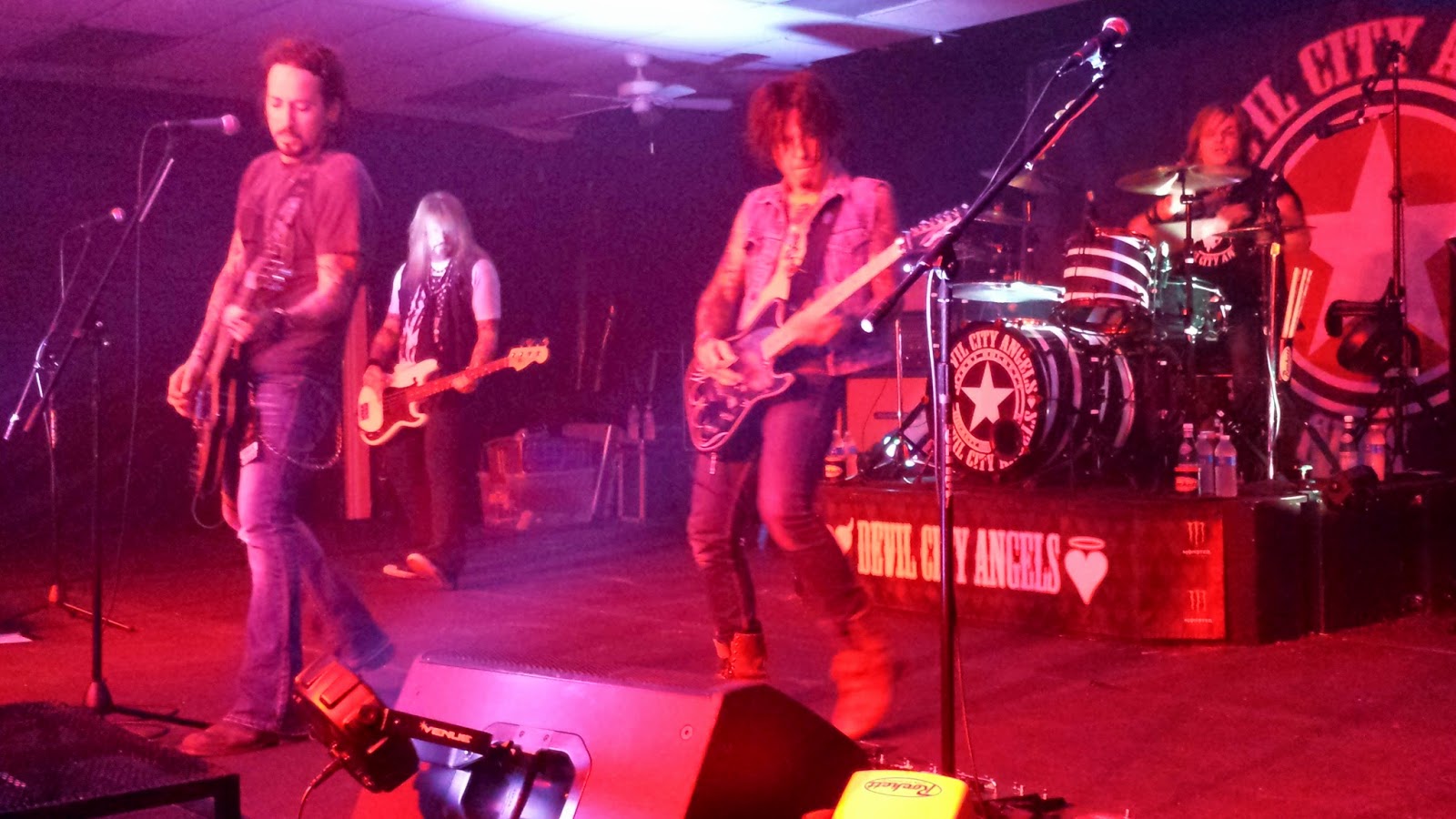 BTW….Keep an eye on our Decibel Geek Youtube page. There may just be a few videos from the show popping up soon!

There ya go, my first post. Short and Sweet.