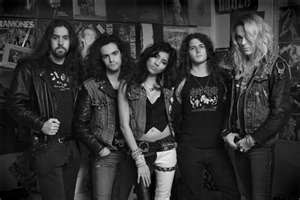 With a new CD set for release on October 2nd, 2012, I would like to introduce you to some booze soaked (sponsored by Jagermeister and Pabst Blue Ribbon no less) hard rock and roll from Toronto Ontario, a Diemonds In The Rough, if you will.

Fellow Decibel Geek, Wallygator and I were excited to see a great night of rock with Lillian Axe, Bullet Boys, Faster Pussycat and Jack Russell’s Great White on the America Rocks bill at The Rockpile Bar & Nightclub in Etobicoke, Ontario.  There were also two local bands on the bill, so with that much rock, the show got under way quite early.  In my haste to leave work and make the trek south to the club, I nearly forgot my ticket!!  I arrived late for the event and only caught the last two songs of Diemonds‘ set.  Being male, I did right away notice the legs of attractive vocalist Priya Panda and secondly their straight ahead no holds barred rock sound.  Read Wallygator’s review of the show: The America Rocks Tour 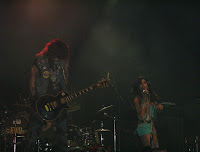 Some time later I attended the Steel Panther show in Toronto and was pleased to see that Diemonds was the opening band as I was excited to give them the full attention that I had failed in the last time.  Do not be lulled into a false sense of security with the pretty looks of the front woman!  Priya and company did not disappoint and her attitude can be heard through and through on every song screaming this take no prisoners rock and roll.   They powered through grinding tunes like “Loud N’ Nasty”, “Take On The Night”, “Mystery” and “Livin’ Tonight” to the delight of myself and the crowd.  I decided then and there that I will not miss another opportunity to catch these five Torontonians play live again! 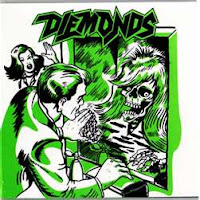 I had a brief opportunity to chat with the band after the Steel Panther set at Sound Academy Toronto as they all swarmed the merch table, eager to chat with fans and sign posters and CDs.
I was elated to see that this awesome band that I had just discovered did indeed have a recording for sale at the show.  The In the Rough EP is aptly titled as it’s a bit raw and rough production wise but is a solid listen and the music shines through. 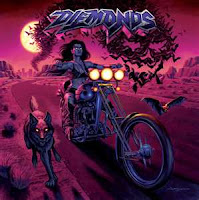 During their autographing of my newly acquired EP, I learned that they were releasing their first full-length record on the Underground Operations label on October 2nd and were hitting the road after this show to perform at the heavy metal festival Heavy Montreal in Montreal.  I find it curious that being a Toronto band, they were not on the bill for the Toronto counterpart Heavy T.O, but still excellent exposure for this young band.  After that, they are off to California to kick off their Take on the West Tour visiting, California, Oregon, Washington, as well as provinces of B.C. Alberta, Saskatchewan, Manitoba.
If the cool cover artwork for the upcoming Bad Pack is not enticing enough to peak your curiosity, here’s a link for their two official videos “Livin’ Tonight“ and “Take on the Night“. The production here sounds excellent, while still capturing the sound of the Toronto-based band, but is certainly a bit cleaner and more polished than In the Rough. 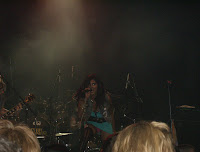 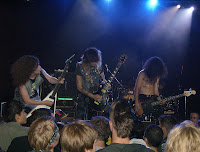 Diemonds have toured Canada, US and made history being the first female fronted act to play the city of Shillong, India.  All this has been accomplished without the backing of a record label.  Their infectious live performances have gained the support of Jagermeister and Pabst Blue Ribbon and they have opened for the likes of Slash, Teenage Head, L.A. Guns, Jack Russell’s Great White and on August 9th, Steel Panther.
Their website claims that Diemonds keeps one boot in the gutter – and the other in your teeth and I for one am waiting in a state of cat-like anticipation for The Bad Pack.

Well now on to Steel Panther.  If you’ve never been to a Panther show, you’re in for a lewd and delightful treat.  Having had the opportunity to catch them previously at House of Blues in Las Vegas, I knew what to expect.  I was a bit surprised to find the venue fairly busy as the doors opened; I did not think that the Panther had a following way up here in the Great White North.  Tons of the crowd were sporting Panther shirts and adorned with headbands and 80’s style clothing.  Their merchandise table had a beehive of activity around it and the product seemed to be selling like hotcakes. 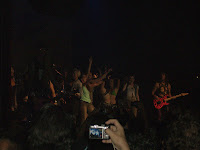 The quartet took the stage and looked the glam part from top to bottom.  Their lewd, crude humour was fluent throughout the evening with claims that Michael Starr on lead vocal “gets more pussy than Motley Crue”, bassist Lexxi Foxxx constantly prissing his hair and make-up in a hand held mirror, comments like “I hate alternative rock chicks that don’t show their tits” and then there’s the song lyrics and topics themselves!  Female audience members are invited and encouraged to join them on stage, show their tits and even make out……..and, yes all of this did actually take place! 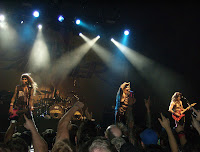 Behind all the comedy show, antics and lewd exchanges and taunts between band members on stage, these guys actually have musical talent and the songs are well written and played but for me, Diemonds outshone Steel Panther that night in Toronto!