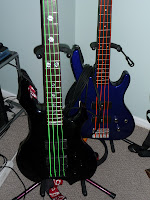 Recently I went back into the vaults (well actually my hard drive) and listened to a few of the older episodes of the Decibel Geek podcast. One episode in particular get me all “agitated” for lack of a better word.

Episode 18 of the Decibel Geek Podcast featured Chris and AAron discussing their top 5 (well actually 6!) “Favorite” Bass Players in Hard Rock and Heavy Metal. Now what got me rilled is that I wasn’t there to chime in and throw my 25 cents into this all important topic of conversation.You see, way back on episode 18, I was not yet  a member of this crazy team.

As a bass player myself (although some may argue that, mostly real musicians) I feel it is my duty to impart MY OWN Top 5 (make that 6 Chris!) favorite Bass Players and also to agree, disagree or crap all over Chris and AAron’s picks.

For those following at home I will list Chris and AAron’s picks along with the “expert” bass players pick. The “expert” being me (oh I can’t believe I said that with a straight face) 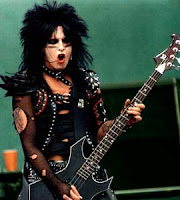 Wally – Nikki Sixx, Ok Sixx is admittedly by far not the greatest bass player in the world. That said, Motley Crue was my first ever concert. This was the Shout at the Devil Tour 1984 and I was all of 14 years old. To a pre-pubescent teenager there was nothing cooler than seeing a leather studded, Sixx beating on a BC Rich warlock. He was the embodiment of COOL, the consummate ROCK STAR and I knew at that moment that I wanted to play the bass. So Sixx may be the sentimental choice but he is definitely on my list because he is the reason I own a bass.

Wally – Andy Curran – Andy is the bass player for Coney Hatch as well as his solo stuff and his band Soho 69. Most of my favorite bass players lay down cool grooves that fit with the song. Andy is no exception, he isn’t flying all over the place (see Billy Sheehan) but you can hear his fills through the mix and he handles the vocals. Not to mention he plays one bad ass BC RIch Mockingbird that I would kill for.

Number 3.
Chris – John Deacon
AAron – Duff McKagen
Now before I get to my number three I gotta reach down and give AAron a shake. Chris hits the nail on the head here. Queen rocks and Deacon can grove like a mofo. This was a great pick and Chris you do need to slip some Queen into AAron’s Ipod pronto.

Wally – Duff McKagen. I agree with AAron here. Like AAron said, you erase all the instruments off Appetite for Destruction except the bass and you still have a kick ass record. Duff’s bass grooves are so deep you could fall into them.

Number 2.
Chris – Billy Sheehan – Nice pick, saw this guy with Roth and Mr. Big. Right up there with Geddy Lee as far as monsters on the bass.
AAron – Robert Trujillo

Wally – Geddy Lee – Cmon this guy plays some of the most challenging bass lines out there. I look at his sheet music and just shake my head and on top of that he SINGs! If that isn’t enough he sometimes adds in some foot pedals just to fill out the sound! A freaking genius on the bass, nothing more to say on that. 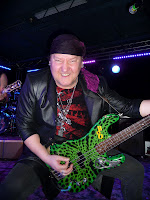 Wally (bonus pick) – hmmm? I am going to say Daryl Gray the bass player for Helix. There was not a band any tighter than Helix was in the 80’s and Daryl was manning the bass station. He is one of the most taste full bass players I have ever seen. He plays true to the song, writes melodic lines, stays in the pocket and sings incredible background harmonies. The best part about Daryl is his stage presence, he really seems to enjoy being up there hamming it up for the crowd. Helix doesn’t have one focal point, they have 5! 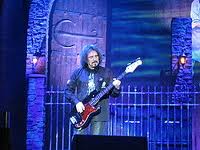 Wally – Geezer Butler – Geezer is the man! Especially his work during the DIO years. Always melodic, his bass lines are really creative and meaty. AAron gets the nod here. Geezer gets my top spot on this list.

Ok, if you have been keeping score at home, AAron and I agreed on both our number 3 and number one picks! However AAron, you loose some serious points for dissing on John Deacon…Queen Rock! Now both you knuckleheads didn’t include Geddy Lee but I guess your off the hook by disclaiming that these were your “favourite” bass players.

It wasn’t until I completed my list that I realized that 3 of my 6 picks were Canadian. Oh well, what else would you expect from your heavy metal hosehead on staff?