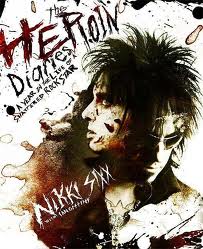 Confession: I just recently(this past February) read Heroin Diaries.  Now, before you scream and start calling me everything but my first name, let me explain. For a brief time I didn’t read anything, or even watch the news. I was married to a man that thought so much within the box, HE BECAME THE BOX, and for a time, I was in that box with him. After I emerged from my coma, I went to my local library and found this book.  Now, the cover of Heroin Diaries is not an innocent one. It’s rather, well, grim, and dark.

The book opens with Nikki, giving a brief and correct definitions of all the medical terms used in the book. Then, the next page is Lemmy, giving the true, raw, uncut junkie version. I liked Lemmy’s version better. The roller coaster begins on December 25, 1986. It starts out somewhat innocent with Nikki writing ‘Merry Christmas’. But  for Nikki, it was anything but. There has to be something said for a man to say that he’s sitting butt naked under his Christmas tree with a needle sticking out of his arm.  No one was safe when Nikki decided to write this book.

The book paints a not too pretty picture of anybody. I have to admit the guys in the band really come off as jerks, especially Vince Neil. I’m probably going to piss off a lot of people when I say what I gotta say. Nikki was a complete asshole to everyone. There, I said it. Did anyone deserve his wrath? No, not really, but at the same time, this man was strung out, and it seemed that the people that could help him, turned a blind eye. Of course those closest to him knew, but who was gonna open their mouth and call him out when he’s the one making sure car notes and mortgages are getting paid…NO ONE. Because, without Nikki, there was no Mötley Crue. 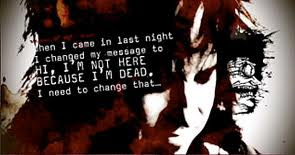 Ok, now back to this book. The details of Nikki’s life are at times a cloud, and sometimes chaotic, and he takes the reader on every moment, from the beginning to the end. Nikki shows he has feelings. He touches on his relationship with Evangelist Denise Matthews (better known as to Vanity).  Now, I’m really about to piss some people off, maybe even get some hate mail. At one point in the book, Nikki, at one point is explaining a past incident between he and Vanity (that was her name and as far as I’m concerned it still is). Even though they are not in the same room, you can visualize these two arguing about what happened happened some 20years ago. And just when you stop and say ‘What the hell?’, Nikki stops and says the same thing. Priceless.  The diaries drips and oozes A LOT OF SEX, TONS OF DRUGS AND PLENTY ,PLENTY AND PLENTY OF STRIPPERS AND BOOZE. I was amazed  at how detailed the entries were and how organized everything was.

The book also goes into the writing of  Girls Girls Girls. The album that some say saved the Crüe from losing everything…LITERALLY. The sessions that Nikki would show up high and spend most of the time in the bathroom shooting up, while Vince did his vocals or while Mick layer out his guitar tracks. I found it sad, that Doc McGhee didn’t do more to get Nikki clean, or the rest of them for that matter. I did however, understand how Nikki would try and keep clean for the sake of his GrandFather. Now, on that I can understand. I’m 38 years young and I don’t really care to drink I front of my father. Even though I know I’m an adult and he does too, it’s just something about drinking(oh and smoking) in front of him that I can’t do it. It’s a respect thing . But he also touches on that issue as well. Here it gets personal for me. Nikki, was raised by his grandparents from time to time. His mother wasn’t around much, next to none. Nikki had sisters that lived with his mom, but he didn’t. Now, my father raised me, my mom wasn’t around. That can do things to a kid. Not trying to preach here, but I could see why he probably, started using and had the type of  mentality he had. He was making other people rich, happy and he was not happy within himself .its often said that our childhood reflects how we survive in the world of adulthood. At one point in the course of this seedy tale, you find yourself  cheering for Nikki to get clean and sober, if not for himself at least for his fans. Then it happens.As we all know Nikki suffered few mishaps when it came to his love for the sludge(as my uncle called it). 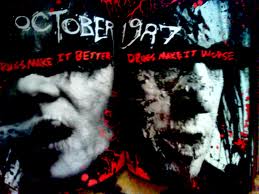 The most famous one was on December 23,1987. In the book, he starts off the entry as saying that “this is what my life has boiled down to…I either have to stop or die…” . That night he was with Robin Crosby (RIP) ,Slash, and his then girlfriend. From all accounts, which seem to be very hazed, the guys were hanging out, of course at the CatHouse, and the Franklin Hotel. So the story goes, the guys had went back to the Franklin Hotel to score. Well, Nikki and Steven Adler were in a room with the dope dealer. I’ve learned from enough episodes of Intervention and just for watching Behind The
Music that you NEVER let anyone shoot you up that doesn’t really know what they are doing. This was such case. Nikki went to Slash’s room, and so the story goes and  DIED.

Since everyone in the room was very drunk and high, there is no actual account, just bits and pieces of what happened. In short, 911 was called and the paramedics had to try to revive him. Now, it’s very, VERY rare that a person can die, and come back after two minutes. But he did. And this is why. One of the paramedics was a Motley fan. So the paramedics use not one, but TWO adrenaline needles to bring Nikki back from the dead. Now mind you, while all this is going down, we have the limo driver, who is hearing this and calls Vince Neil. Now, anyone who’s read “Tattoos and Tequila” by Vince, already knows these two had a bad bromance, but deep, really deep down Vince had love for Nikki, and he even said in the book, he cried when he heard the news. 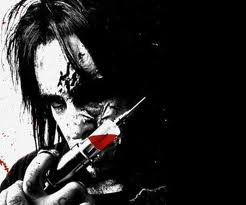 Changes came down after Nikki’s death/revival. The European leg of Girls Girls Girls was ca
nceled. With that, Nikki decided to take full control of his life and habits. The first was getting clean. Nikki went cold turkey, moved out of Van Nuys, to Hidden Hills. He also wrote Dr. Feelgood, another classic, began therapy, not just for his issues, but also got the guys to join him in group therapy, which we all know gave way to a better stronger Mötley Crüe .

Heroin Diaries is a really good read. It’s a real, grimy read, that isn’t for the easily offended or the shy. It is a honest look at a life filled with drugs and pain, but it shows how no matter how shitty you think life is right now, somebody else has it shittier than you.  One thing this book does show, is money, no matter how much you have can never but you happiness.
So pick it up, read it, laugh a little. HAPPY READING.