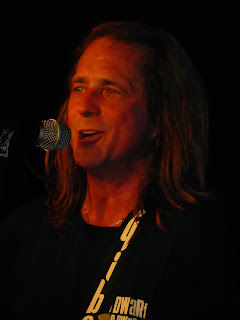 The première rock club in the Toronto area, The Rockpile at 5555A Dundas Street West in Etobicoke has been working hard booking some great rock acts, developing their own rock scene and destination in Toronto.  Owner Dom and in house promoter Steve are both excellent guys, very friendly and accommodating to their customers and the bands that they’ve booked to rock The Rockpile.  In house sound man, Jake, has been referred to as one of the best around and we’ve heard that phrase uttered from more than one band.  Some of the bands that have rolled through The Rockpile include, Stryper, Y&T, Quiet Riot, Brighton Rock, Kill Devil Hill, Coney Hatch, Jack Russell’s Great White, Faster Pussycat and many more.  The Rockpile is easy to get to via public transit or has lots of free parking and is just a pleasure to see a show at.

Now it’s double your money, double your fun as they have just opened the sequel, The Rockpile East at the other end of the subway line, 2787A Eglinton Avenue East in the west end of Scarborough.  This means now that they can entice even more bands into Toronto as they can be offered two shows on back to back nights at each venue making it more worth their while to endure the crossing the border hassles.  Friday October 4th, 2013 was the date set for the Grand Opening of the new club with none other than the recently re-formed KiLLeR DWaRfS as the kick off party.  The show was totally sold out, what a great welcome for the DWaRfS and The Rockpile East!

Wally and The Meister met up outside the club around 7:30pm, admiring the looks from the 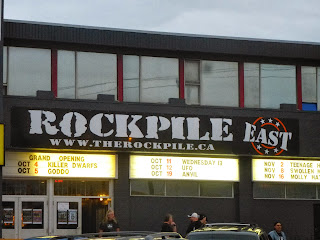 outside.  The line up to enter was already forming across the front of the building for the scheduled 8pm door time.  We entered the club and the smell of fresh paint filled our nostrils as we were excited to check out this new playground.  Securing some frosty adult beverages, we found a great perch to catch the show.  As neither of us was feeling in tip top condition with brewing colds, we forewent our usual concert viewing area of stage front leaning and stationed at a railing by the raised bar area.  A great view of the whole stage, and close for beverage refuelling as well!

Mortal Fear was the first act on deck with their old school metal songs.  They did a decent job and we both agreed that we would watch out for them in the future. Classic “old school heavy metal” is how they described their sound with their set of Judas Priest influenced originals. Flux 440 took the stage next and we noticed that both this band and the previous were not young kids as we usually see for the opening acts.  Flux 440’s last song choice was a cover of UFO’s “Lights Out” which is incredibly fitting seeing as UFO themselves would grace this very stage the next coming weekend. A more melodic, classic rock sound reminiscent of Coney Hatch, these guys delivered a solid set of no nonsense classic rock.

Raised Emotionally Dead came on next after an intro from Iconic M.E.A.T. Magazine editor Drew Masters.  We had both seen R.E.D. previously and was again enamoured with their show.  There’s certainly a lot going on on stage for them as there are about 10 people up there, dancing girls with boxing gloves, nurses with liquor filled syringes and more.  Their cover of KISS’s “I Was Made For Loving You” is always a good time. They took some time to introduce some new songs that they are working on and if you haven’t seen R.E.D live, it’s an all out sonic and visual assault on your senses. 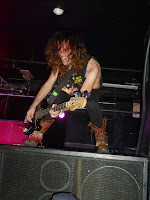 Again Drew Masters took the microphone to introduce local Toronto and Decibel Geek favourite band Diemonds.  Diemonds are proudly carrying the torch and waving the sleaze rock flag in today’s musical landscape.  Diemonds would surely have made huge waves had they been around in the 80’s.  A microphone issue during the opening cut hampered the song as we could not hear vocalist Priya Panda at all.  Once that was repaired near the end of the song, Diemonds proceeded to destroy the new Rockpile East playing selections from their fabulous Bad Pack  record (which has drawn the attention of Ron Keel’s “Streets of Rock & Roll” radio show) like “Get The Fuck Outta Here”, “Trick or Treat” and 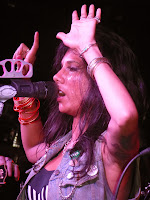 “Take On The Night” as well as some new compositions.  Guitarists C.C. Diemond and Daniel Dekay were shredding it up as drummer Aiden Tranquada pounded out the beat.  Bassist Tommy Cee was often missing from the stage as he played out in the crowd or on the back bar while Priya Panda delivered the lyrics with the venom and attitude we’ve come to expect, also announcing that January would mark the seven year anniversary of Diemonds.  This band “gets it”, every time they play they leave all they have on that stage. Guitars swinging, speaker climbing, it’s a blur of high energy movement, blink and you’ll miss something but most of all they look like they are having a fucking blast up there and that is infectious. Be sure to catch Diemonds on their fall “Skeletour” US and Canada invasion starting on October 24th. 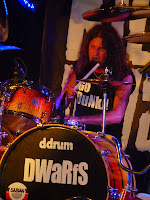 Drew Masters once again riled up the crowd for the upcoming head liners, KiLLeR DWaRfS and also brought up a special guest for the evening of The Food Network’s chef Michael Smith, who’s towering height “dwarfed” the shorter statured Drew.  “Stand Tall” led the charge for the DWaRfS and Russ was a flurry of activity covering every inch of the stage…..quite different from seeing him aboard the Monsters of Rock Cruise where he was sitting on a stool and playing acoustically!  Method to the Madness‘s “Hard Luck Town” minus the foul mouthed miner intro that appears
on the CD was next on the list and Darrell DWarRf looked almost animalistic pounding away on the drums. 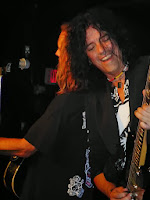 “Believe In Me” saw Russ leap into the crowd near the end of the song for a little crowd surfing.  Russ kept pushing the envelope during “The Last Laugh” which became the Russ DWaRf comedy show with his humorous monologues, wacky facial expressions and falling down to the stage and cartwheeling to his feet seconds later. Loud was the understatement of the year and we thought we might get a reprieve as we saw the acoustic guitar appear for “Driftin’ Back”, but the volume was still way past 11!  This show actually made us consider the use of earplugs at a concert!  “Union of Pride” stormed through to “Doesn’t Matter” which saw the return of the acoustic guitar. 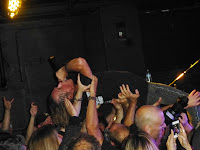 Russ announced that they would be back to destroy The Rockpile East again on February 1st before starting into “Nothing Gets Nothing” which again saw him surf the crowd, this time still singing the whole time and not missing a note!  The new, well newly released, KiLLeR DWaRfS album Start @ One was originally recorded 20 years ago after 1992’s Method To The Madness but was shelved and only just been remastered and released.  From that we were treated to the title track.  “Keep The Spirit Alive” closed out the initial set that saw Russ doing a headstand and then another crowd surf this time hanging upside down from the lighting rafters at which time it appeared he lost his grip falling onto the audience. We cringed as for a moment it looked like he was headed for the floor but somehow the crowd was able to catch him averting a possible injured Dwarf. Ain’t nothing in the world like a KiLLeR DWaRf show!

The encore performance was “Dirty Weapons” during which Russ could be seen to signal to side stage that he was done.  Too bad as the next song listed on the set list was “Heavy Mental Breakdown” from the first KiLLeR DWaRfS recording and something that both Wally & The Meister sorely wanted to hear live, oh well, maybe on February 1st. 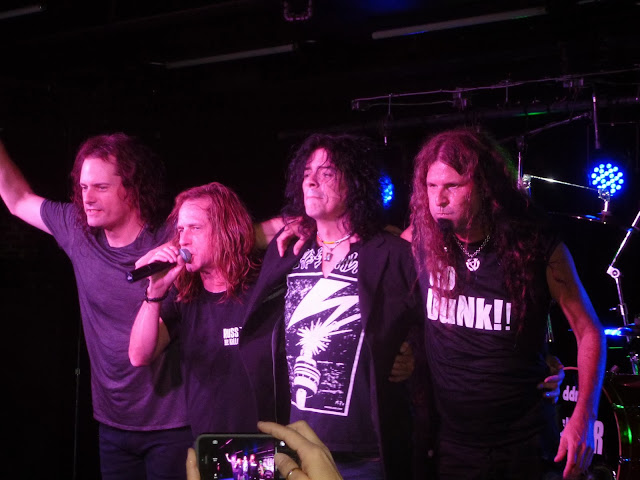 Russ and the rest of the DWaRfS, Darrell DWaRf on drums, Gerry DWaRf on guitars and newcomer John “Johnny DWaRf” Fenton from Darrell’s band Automan.ca taking over for original bassist Ronald “Bad Ronbo DWaRf” Mayer provided an awesome show showing the fun and tongue in cheek humour that is the KiLLeR DWaRfS.  They may have only played a total of eleven songs, but with Russ’ stage persona, blatant disregard for his own personal safety and body leading the charge, the DWaRfS new and old cranked up the volume until the knobs broke, blowing Toronto and The Rockpile away!  I sure hope this place was built soundly!