You just keep coming back to get your ears blasted and we thank you! Last week’s Eric Carr episode really took off and we want to welcome all the new listeners. For the uninitiated, we try to mix things up throughout the month. While we love doing the interviews and have plenty more for the future, we also like to showcase some music as we’re doing today. 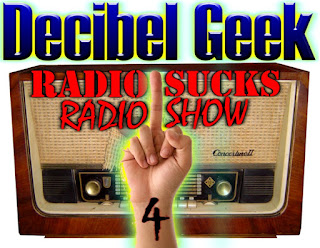 Corporate radio sucks. That statement is about as simple as saying that the sky is blue or Nickelback is the antithesis to good music. With that said, Aaron Camaro & Chris Czynszak set out each month to play you some deep cuts from rock and metal history that the payola-induced corporate fat cats shudder away from. This is the Radio Sucks Radio Show part 4!
Direct Download
We’ve got a full slab of great music for you today. We start things off with a Motorhead track from the ‘Iron Fist’ album followed by a KISS track off 1974’s Hotter than Hell.
Our first break is comprised of a flashback commercial featuring an unlikely pairing between two acts; especially when you consider who was opening up for whom.
We segue into some ‘Shout at the Devil’ era Motley Crue as we discuss the band’s recent residency in Las Vegas. We make sure to update everyone on Vinnie Vincent’s recent musical output. It’s buggin’! After that, we give you a track from the 31st lineup of L.A. Guns, the last one to feature Phil Lewis and Tracii Guns before they decided that two was better than one.

With this week’s release of ‘A Different Kind of Truth,’ Van Halen is front and center on the world’s radar (competing with the likes of Snookie and American Idol, wtf). We decided to avoid the lawsuit and play a classic Van Halen cover instead to get you primed for the new one. Trust us, it’s worth going out and picking up.
The second break of the show features David Lee Roth extolling the virtues of the Decibel Geek podcast. We also hear from an inanimate object that is near and dear to a former WASP guitarist’s heart (and liver).
The next 2 songs feature polar opposite bands but equally enjoyable. One is known for providing levity and humor in their records and their movie. The other was a legend that’s music still holds up today against all of the other metal bands that they inspired.
Next up is a band that you’ve probably never heard of covering a song of another band you’ve probably never heard of. Exciting right? Aaron really pulled out a gem with this one. Midnight Moses was originally performed by the Sensational Alex Harvey Band but covered beautifully on this track by Spearfish.
Our next break includes Nigel Tufnel explaining why the Decibel Geek podcast is the only show that goes to eleven. We also hear from Mama Cass in her final moments.
We wrap up the show with some bands that each of us dig from the 1990’s. Chris spins a track from a band that many of our listeners probably consider rap-metal but there’s no doubt that musically this track slams. Go ahead and start writing your hate mail; we can take it. Aaron closes things out with a track from a band that Chris can’t stand. In all fairness, Chris has only heard the one track that this band is known for so Aaron decides to expose him to a new slice of said group’s catalog. Will Chris dig it? Wait and see.
That’s all we got this week. Can you believe we got through all of these show notes and didn’t say one thing about the Super Bowl? Dammit!!!