Facebook
Twitter
LinkedIn
WhatsApp
Telegram
Email
Print
We’re very excited to bring you this week’s episode. Today, we give you our recent conversation with Eddie Trunk. Mostly known from That Metal Show on VH1 Classic, Eddie has a rich rock and metal history that we delve into in this hour-plus in-depth discussion.
Direct Download
From High School Student to Record Executive 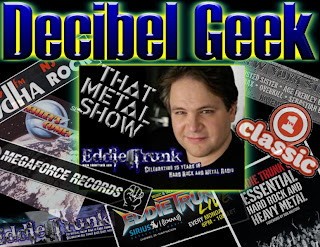 We venture back to Eddie’s teen years when he was introduced to the radio industry via a college station that taught radio basics to high school students. That led to his employment at a record store located across the street from a local rock and roll radio station in New Jersey. After a run of turning the radio station employees on to a number of rock and metal bands that they were ignoring, Trunk decided to take matters into his own hands and produced a deejay demo tape through a friends pirate radio station. The tape was good enough to earn him an internship at WDHA and later, his own show.

While earning his stripes in rock radio, Trunk met Jon Zazula, then a local record shop owner. Zazula was starting up his own record label and implored Trunk to give his struggling bands some exposure. With that, Eddie Trunk became one of the first major market deejays to spin tracks by bands such as Anthrax and Metallica. Trunk soon took on a job with Zazula, now known as Jonny Z, at Megaforce Records where he ascended to Vice President at the age of 25.
Meeting the Ace and Moving On
While at Megaforce, Trunk helped kickstart the careers of such bands as Kings X, Overkill, and Manowar. But it was a dream come true as a KISS fan to help get Ace Frehley back into the music world with the formation of Frehley’s Comet. Trunk quickly bonded with the guitar legend and their friendship remains strong to this day. In this discussion you’ll hear Eddie’s memories of that time working with Ace and his thoughts on Ace’s recent sobriety.

After a few years at Megaforce, Trunk had a brief stint in music management and continued to build his radio resume in the New York area; working at some of the bigger rock stations as well as being picked up for syndication in other markets.
TV on the Radio & Metal for a Cause
In 2001, Eddie began his long-term relationship with VH1 Classic; becoming the featured male host for special programming as well as interviewing many rock legends on the ‘Hanging With’ series.
Also in 2001, Trunk organized the New York Steel Concert; benefiting the victim’s families of 9/11 with a huge set by Ace Frehley, Overkill, Anthrax, Sebastian Bach, and a reunited Twisted Sister. The event raised hundreds of thousands of dollars and is considered by Trunk to be his most proud accomplishment in music.
That Metal Show & The Book Club
Eddie Trunk is currently the host of VH1 Classic’s That Metal Show; considered to be the leading talk show for all things hard rock and heavy metal. The new season will begin taping in March 2012.

Trunk also recently released his book ‘Eddie Trunk’s Essential Hard Rock and Heavy Metal’ and has appeared at book signings recently. The book is available wherever books are sold and personally signed copies are available at www.EddieTrunk.com.
Updates from Eddie Trunk are also available via his twitter page @EddieTrunk.

We want to thank Eddie again for coming on our show and hope that you enjoy listening to us discuss his history in the hard rock and heavy metal universe. Rock on!