Now that KISSMAS in July is over, the Decibel Geek Podcast returns with a bunch of variety this week all in the name of threesomes! Before we get to the music, a couple of announcements.

As we announced last week, you can stream the Decibel Geek podcast ever Friday night through Maximum Threshold Radio at 7:00p.m. EST. We’re proud to be a part of this great internet radio station and highly recommend you check them out for some great rock and metal as well as the Maximum Threshold Radio Show that is streamed live every Saturday night. You never know, Chris or Aaron just might be in the chat room during their show.

This week’s Geek of the Week is David Haltom! David left an awesome comment on our facebook fan page that mentioned Aaron Camaro’s laugh that gave us a good chuckle. Aaron is now in therapy and we thank David for his contribution. Now, let’s get down with the meange a trois!

Get your mind out the gutter folks! Did you really think we were going to spend an hour talking about old Ginger Lynn and Ron Jeremy films? We teased you with all sorts of things involving the number 3 over past week and today we discuss our favorite threesomes; as in rock power trios. 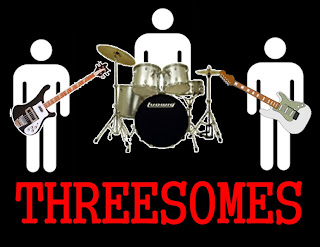 A rock trio is about as bare-bones as you can get (as long as you aren’t counting folk singers and 2-man hipster garage rock). No keyboard players (unless one of the three is one), no backup singers, and no extra percussionists (we’re looking at you, Slipknot). The onus is purely on the three individuals to hash things out and make the magic happen. While there are plenty of fantastic four and five piece bands the existence of the power trio makes one sit up and take notice as there is an honesty and ingrained camaraderie that takes place between the members.

A group that helped define the term “power trio” was certainly the Jimi Hendrix Experience. Hendrix, one of the most influential guitarists in rock history, was perfectly complimented by the solid bass playing of Noel Redding and the ferocious drumming of Mitch Mitchell. Aaron’s choice of song is immediately recognizable but that does nothing to short-change its impact to this very day. 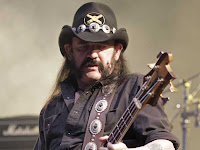 Chris recently watched the rockumentary, Lemmy; centered around one Mr. Kilmister. Still running on the high of viewing this great film, Chris’ pick of Motorhead is a natural for this list. Bare-bones, kick-ass rock is featured from Lemmy and co. with a track from the No Remorse compilation that is very reptilian in nature.

It’s hard to believe that ZZ Top has been around since 1969 and are still kicking ass to this day. With their new EP ‘Texicali‘ the band, thankfully, have ditched the synthesizers that propelled them to the top of the mainstream charts in the 80’s in favor of the boogiefied (is that a word?) approach that build their hardcore fanbase throughout the 1970’s. Aaron spins a track on this short appetizer to their full album due in the very near future.

We couldn’t do a show on Rock’s greatest trios without including a great group from Canada……The Tea Party! Don’t worry, that other awesome trio will be played later in the show. The Tea Party (no affiliation with the political group), rose to prominence in Canada from the 90’s through 2005 and are recently reunited. Sporting a sound that could be described as the Doors meets Zeppelin with a side of Ravi Shankar, Chris was very surprised when he stumbled upon this group while researching for this episode and gives you a taste of what this little-known (outside of Canada) band sounds like.

Formed in Cleveland, Ohio in 1966, the James Gang never achieved the breakthrough success that singer/guitarist Joe Walsh would later enjoy with The Eagles and his solo career but this was a very important band for the late 1960’s and early 1970’s that need to be heard and appreciated. Aaron’s funky pick of a song from 1970’s James Gang Rides Again is a riff that is just as awesome today as when it was released.

Chris’ next pick of Rush is mandatory in order to keep Canadian listeners from making a trip to Nashville with pitchforks in hand. Aside from that, Rush is a great band and Chris’ pick of a track off of their brand new Clockwork Angels album is quite possibly the heaviest song that Geddy Lee, Alex Lifeson, and Neil Peart have ever produced.

Sublime was one of those bands that was pretty much over by the time they had a chance to enjoy the fruits of their labor. With the untimely death of singer Bradley Nowell, the band has since gone on to perform with a different singer but has failed to capture the ska/rock/punk mix they were able to conjure with Nowell. Aaron’s song choice for this episode is a shining example of what could have been.

No list of greatest rock trios would be complete without a mention of Cream. One of the very first supergroups, Cream consisted of Jack Bruce, Ginger Baker, and Eric Clapton. Bruce’s experimental jazz-like bass lines and Baker’s heavy-handed drumming were perfect compliments to Clapton’s blues-based noisefests that were produced from the earliest days of the wah-wah pedal and Chris’ song choice is a stunning reminder of how prolific this band was.

Possibly the most underrated rock trio ever, King’s X has plowed ahead through 30+ years of trials, tribulations, and tons of great music. It’s truly criminal that this band has not received the mainstream support that it so richly deserves. The soulful playing and singing of bassist Dug Pinnick, the soaring solos and harmony parts of guitarist Ty Tabor, and the swinging, powerful drumming of Jerry Gaskill fuels this Texas-born trios amazing balance of heavy meets melodic rock. Chris’ song choice from 1994’s Dogman album showcases the tightness and tenacity that is King’s X.

Known as the band that killed glam, Nirvana exploded onto the world’s stage with their 1991 album Nevermind and went on to become one of the most influential bands of the modern era. Aaron decided to go back further and showcase a track from the band’s pre-success era album Bleach and you’ll also hear the story behind the song. We close things out with a track from three guys from New York City that has a license to ill. While the Beastie Boys have never been known as hard rock or heavy metal, there’s no denying that this track from the Ill Communication album will certainly get you pumped for a night out (or an ambush).