When we think back to those angst filled teenage years in the early 90’s when we couldn’t find a fake i.d. and we still had a curfew, some of our best memories are of spending Saturday nights hanging out at a friends house, eating day old pizza and watching the Headbangers Ball on MTV. 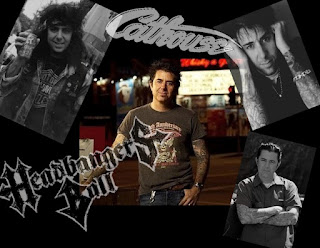 While the show started back in 1985 with an ever-rotating host, the show came into our collective consciousness during the transition from Adam Curry to this week’s guest, Riki Rachtman.

While Curry did an admirable job hosting the Ball, the show took on a more adventurous and fun direction when Rachtman took the reins in 1990.

Riki Rachtman’s profile in rock history goes back further, though, to his days as owner of The Cathouse; a famed L.A. nightspot that was frequented by rock stars of all sorts and the women that adored them. Rachtman’s first on-camera appearance took place in 1988’s Penelope Spheeris-directed The Decline of Western Civilization Part II: The Metal Years. In the movie, Rachtman is interviewed on location at the aforementioned Cathouse along with co-owner/roommate Taime Downe of Faster Pussycat.

Rachtman’s friendship with Guns N Roses frontman Axl Rose led to an audition at MTV as Curry was on his way out as host of Headbangers Ball. His hosting duties would last for five years (1990-1995) until Headbangers Ball was abruptly canceled with no more than a phone call to Rachtman breaking the news.

In the ensuing years since Headbangers Ball, Riki Racthman has stayed active in the entertainment industry; contributing his hosting talents to such outfits as World Championship Wrestling, Los Angeles radio station KLSX, several VH1 productions, and his NASCAR-themed racing show called Racing Rocks and is heard on over 120 stations across America.

Riki was gracious enough to take some time to talk to Chris this week about the crazy days of The Cathouse, the story that led to getting the Headbangers Ball hosting gig, his memories of hosting the Ball and traveling the world, his response to critics that have accused him of pushing an agenda while on MTV, and his take on where the network (and music in general) is at today.

Riki also gives us details about his current 3-country/11 state trek from Mexico through America through Canada and to Sturgis on motorcycles with his long-time friend Taime Downe. As of the date of this episode’s recording, Riki and co. were in Washington state and you can track their progress in real-time by clicking this link or you can receive his updates on his Twitter page.

We thank Riki Rachtman for taking the time to talk to us. We hope this episode brings back as many memories for you as it did for us.