It’s no secret to fans of the Decibel Geek Podcast that we, especially Aaron Camaro, have a great affinity for Ugly Kid Joe. 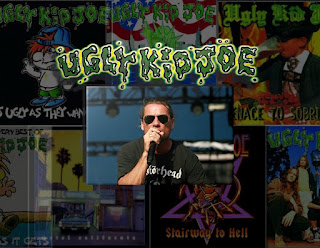 Born out of suburbia (ie. Isla Vista, CA) in 1990, Ugly Kid Joe showed up in the middle of a power shift in the rock world with a sound that didn’t fit into the glam rock style that was on its way out nor with the dirge-like sound emanating from the grunge underbelly of Seattle that would soon take over the world.

Named on the spot as a spoof of California hair-farmers Pretty Boy Floyd, Whitfield Crane and best friend Klaus Eichstadt formed the initial lineup of the band and released the breakthrough EP, ‘As Ugly As They Wanna Be.’ The album broke through to mass audiences with the success of the track ‘Everything About You‘ and would go on to become the first EP to be certified multi-platinum by the RIAA. In this long-form discussion, Whit Crane shares the stories of how the band was formed, what the musical climate was like at the time, and his opinion of Pretty Boy Floyd. 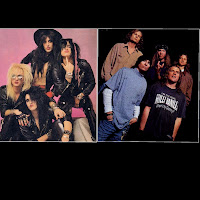 Ugly Kid Joe would climb the rock ladder in 1992 with the follow-up album ‘America’s Least Wanted‘ which featured the considered-by-WalMart-offensive cover depicting Lady Liberty giving the finger. Featuring a guest vocal from Judas Priest’s Rob Halford on the track ‘God Damn Devil,’ the album solidified Ugly Kid Joe in the public consciousness with the release of their cover of Harry Chapin’s ‘Cat’s in the Cradle‘ and, to a lesser degree, the opening track ‘Neighbor.’

A long period of touring the globe would ensue throughout the following years including opening slots for Ozzy Osbourne and Def Leppard as well as headliner status of their own. Along with lots of touring, Ugly Kid Joe was on a non-stop treadmill of appearances, interviews, award shows, and other assorted promotional activities (also LOTS of partying with such legends as Eddie Van Halen and Lemmy). Crane reflects on how crazy the lifestyle was and what memories remain with him to this day.

After disappointing sales for the 1996 release ‘Motel California,’ Ugly Kid Joe disbanded the following year. The members went on to other projects and bands with Larkin becoming the drummer in Godsmack and Crane doing a stint with Life of Agony as well as work with Medication and reuniting with Larkin for Another Animal. In this conversation, Crane reveals the emotions and motivations behind these projects and reflects on what he takes away from those experiences.

After 15 years apart, the 1995 lineup of Ugly Kid Joe have released their new EP, ‘Stairway to Hell.’ Featuring a bold production from guitarist/production genius Dave Fortman, the album has all that one would expect from Ugly Kid Joe and more. We get Whit’s thoughts on our impressions of the album and if he agrees or not.

Aaron also gives a heartfelt testimonial to Whit on behalf of all Ugly Kid Joe fans before we wrap things up with a special preview of the upcoming single from ‘Stairway to Hell.’ We thank Whitfield Crane for giving us his time, attention, and reflections on a career that has rocked and shows no sign of stopping.