It’s been quite a memorable week here at Decibel Geek headquarters. 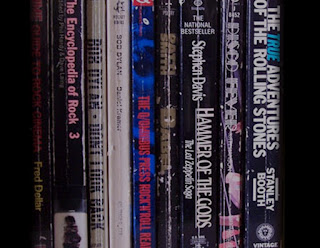 We had record numbers of downloads with the recent Bruce Kulick episode and have received a lot of great feedback on the show. Bruce is currently doing a Crazy Nights retrospective on his official site and it would behoove you to give it a look. Good insight into a very divisive album among the KISS Army.

In other KISS-related news, our very own Wally Norton had his recent review of The Tour’s stop in Toronto get a mention on KISS Online. There’s also another great Toronto review posted by The Meister that you should check out as well. We’ll put our horns down and get on with the business of this week’s episode. 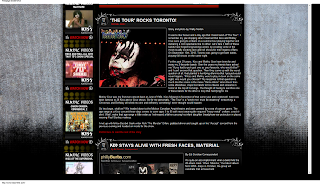 As we announced last week, Aaron and Chris will be appearing in-person at the upcoming Nashville Comic & Horror Festival at the Tennessee State Fairgrounds on Saturday, October 6th. They will be recording all day long at their table and YOU can even be on the show. All details including guest list and prices are available at www.comiccitytn.com.

This week’s Geek of the Week is Jani Vare who had some great feedback on the Bruce Kulick episode. To be eligible to be a future Geek of the Week simply join our facebook fan page and add to the conversation.

The only thing more enjoyable to a true Decibel Geek than listening to music is reading the stories behind the music. There have been some amazing books written about the genre of Rock as well as plenty of great bio/autobiographies that give a deep insight into the people that churn out that ear-splitting music that we love to hear. With that in mind, we present this week’s topic; Library of Loud: Favorite Rock Books. 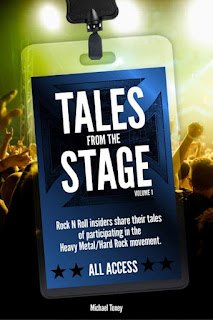 Joining us for this discussion is someone that certainly knows a thing or two about Rock books; author Michael Toney. Mike recently released his own book; Tales from the Stage. This book is loaded with great interviews of numerous bands/artists that are right in the Decibel Geek wheelhouse including Ron Keel, Tracii Guns, Eddie Trunk, and the aforementioned Bruce Kulick. This is not standard fare as far as rock interviews go as Mike delves deeper with his questioning to probe out specific details about the lives of his interview subjects that are eye-opening, funny, and as is the case with WASP’s Chris Holmes, utterly shocking. You’ll look at your favorite rock stars with a whole different perspective after reading this book.

We decided to do a round-robin style conversation about our favorite Rock books with each of us discussing three choices each as well as the most popular suggested pick by our listeners at the facebook fan page.

In round one, Mike picks a relatively recent autobiography by a certain Spaceman from a different planet. Aaron picks an exhaustive document on England’s biggest rock export of the 70’s and Chris chooses an autobiography that is a serious look at the inner-workings of one of the biggest bands in history told from a members’ persepctive.

Round two sees Mike picking a memoir of a metal legend that’s recent statements in the press have been equally as impactful as the thrash music that he’s churned out for 30 years. Aaron’s second choice is an in-depth look at the Hottest Band in the Land from the business side of things that includes so much detail it could easily be required reading in a college classroom. Chris rounds out round two with an inspiring book that chronicles that life of a concert promotion giant that ended in tragedy.

Before we get into round three, Mike shares a contradictory take on the Mark St. John transition to Bruce Kulick in KISS during the 1984 Animalize tour. Aaron and Chris were truly surprised by this revelation. Is it the real story? What do you think?

Our final round of picks includes Mike’s pick of an autobiography that is as entertaining as it is informative and is, quite frankly, a miracle in its existence due to the tumultuous lifestyle of the book’s namesake. Chris’ final pick is, in his opinion, the ultimate document on KISS (can you tell we like them?) with its engrossing detail and depth. Aaron finishes things off with his final pick that happens to coincide with our listener’s overwhelming favorite and it’s a choice that is anything but clean.

With a topic like this there are so many other choices that could have ea
sily been our lists but are also worthy of your time and attention. These include books that have been promoted on our show before like Lydia Criss’ Sealed with a KISS and Dick Wagner’s Not Only Women Bleed.

Before we let Mike go, we had to grill him for his thoughts on the enormous (in size AND price) KISS Monster book that was recently released and he certainly didn’t shy away from his opinion on it. 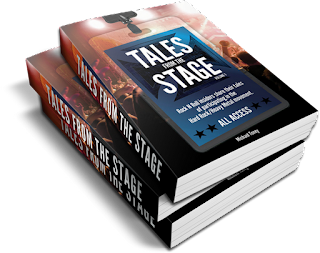 As you’ll hear at the end of the show Mike is graciously offering a great deal on Tales from the Stage for the Decibel Geek listeners. If you go to www.TalesfromtheStage.com before October 31st and type in the offer code RADIO, you’ll get 10% off the price of the book! This book will make a great addition to any rock fans book shelf. Get it before it’s too late.

We’d like to thank Michael Toney for being this week’s guest and appreciate him coming on to Geek out with us about books. Read on!