Last week’s conversation with original KISS road crew member, Peter “Moose” Oreckinto, was the fastest downloaded episode in Decibel Geek history. On top of that, it’s elicited some of the best feedback we’ve ever had. This week we’re proud to bring you another long-form discussion with Moose! 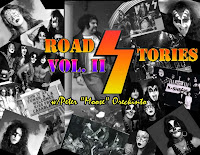 In this week’s episode, Moose returns to share more road stories from the early days of KISS as well as some memories of his return to the band in a management capacity on the Destroyer tour.

First, some business to attend to:

The interview clip that you hear at the beginning of the show of Peter Criss speaking of Moose  is courtesy of Annika Sonic from The Sonic Boom LIVE show on 95.3 DNH in Honesdale, PA. Check out the show HERE

Around the 30 minute mark in the show, we hear from longtime KISS writer/collaborator Adam Mitchell. Adam, known in KISS fan circles for his work on Killers, Creatures of the Night, and Crazy Night is launching two brand new sites that promise to be very interesting for songwriters and KISS fans alike. Check them out at:
www.AdamMitchellmusic.com
Www.songcoachonline.com

As some of you may know, the original intention of this week’s episode was to have an in-person discussion between Moose and Aaron Camaro. The conversation did take place, at The Rainbow Bar & Grill no less, but technical gremlins got hold of the file and the audio was lost. Luckily, Moose was nice enough to do part 2 through Skype.

While at the legendary Rainbow, Aaron and Moose received some first class service and food from their waitress Julie and the staff there. So, this week’s Geek(s) of the Week are the staff at The Rainbow Bar and Grill. Check out the Rainbow online HERE.

We dive into the conversation discussing KISS’ rehearsals and showcase at the famous Fillmore East in late December 1973 into early 1974. With Paul wearing the short-lived bandit makeup and the band using a short-lived spiderweb backdrop, it’s an interesting moment in KISStory. We get Moose’s memories of this time including a heated exchange between him and a Casablanca Records executive.

In this discussion, you’ll also get Moose’s recollections of KISS’ first trip out west to provide the entertainment for the Casablanca Records launch party at the Century Plaza Hotel as well as their television debut a few days later at the Aquarius Theater for Dick Clark’s In Concert program. Speaking of television, we also get Moose’s memories of the band’s wild appearance on the Mike Douglas Show and how the low ceilings in the studio presented some problems for the band’s pyrotechnics.

KISS’ first appearance on June 1st, 1974 was a big moment on the band’s climb up the ladder but money problems were plaguing the band and, especially, the crew. Moose shares his memories of the crew being stranded in San Francisco with no money for food or gas to get to the next show 1800 miles away in Minot, North Dakota.

We also hear Moose’s memories of returning to KISS after his injury to be the assistant road manager on the Destroyer tour and how it differed from his previous job working with the special effects. Some interesting takes on Ace and Peter from the road.

Other subjects touched on in this in-depth discussion include KISS’ strange appearance at Eielson Air Force Base in Fairbanks, Alaska in front of a very shocked group of soldiers and their families, Moose’s memories of Joyce Biawitz/Bogart, his time after KISS working with artists such as Angel and Alice Cooper, and how he met his wife (there IS a KISS connection).

The book that has been referenced in this episode, and last week’s, is the upcoming ‘Nothin’ to Lose: The Making of KISS (1972-1975)’ in which Moose is quoted as well as 200 others that worked with/for the band during those formative years. This book was put together by the band and author Ken Sharp and is expected to be one of, if not the, best KISS-related book to be released. Pre-Order Nothin’ to Lose HERE.
lign=”center” cellpadding=”0″ cellspacing=”0″ style=”margin-left: auto; margin-right: auto; text-align: center;”> 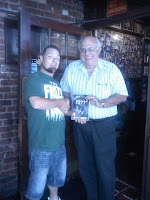 The Decibel Geek podcast thanks Peter “Moose” Oreckinto for his time and amazing stories on the early days of KISS. This will, no doubt, lead to more appearances in the future as we’ve really become close with Moose and look forward to more in the future. We wish him all the best in his personal ventures as well as for the success of the upcoming book.

The Decibel Geek podcast also wants to thank Lydia Criss for providing this great photograph of some of the road crew including Moose (far left), Sean Delaney, and JR Smalling. Pick up Lydia’s amazing ‘Sealed with a KISS’ book HERE