Okay, we’ve been threatening it for a long time and the day has finally arrived. We’re going into the thrash genre this week. Aside from the M&M episode that focused on favorite Metallica and Megadeth songs, we’ve shied away from the harder-edged stuff. Why? Well, we learned early on that a large amount of our listeners are not big on thrash metal. That said, there have been a number of requests for us to delve into the genre and we think we’ve come up with an interesting way to do this that will, hopefully, be entertaining to everyone (including the non-thrash lovers). If not, we’ll see you next week for episode 100 (please leave us a voicemail HERE to help us celebrate 100 episodes). 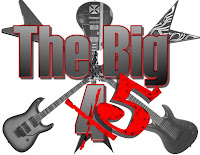 Thrash metal was, and continues to be, a non-mainstream form of music. The only exception, of course, would be what’s referred to as, The Big 4. This elite club is, typically, filled out by metal gargantuans Metallica, Megadeth, Slayer, and Anthrax. While the mainstream music listener would almost certainly agree that these bands deserve their spot in this exclusive club, there are a ton of great thrash metal bands out there that go under the radar due to the Big 4 taking up so much of the spotlight.

Our goal this week is to pose the hypothetical question: “What if the Big 4 became the Big 5?” What bands would be considered for elevation to such lofty status? Aaron and, most certainly, Chris’ picks are going to surprise some and enrage others. Thrash fans are a lot of things and “passionate” would be at the top of that list. So, before we get into the meat of the episode, a quick disclaimer:

The following episode of the Decibel Geek podcast is being done with tongue planted firmly in cheek. While some of these songs and bands definitely could be considered for Big 5 status, certain choices by the hosts of this episode are being made and hypothetically elevated to Big 5 status in good-natured fun. The Decibel Geek podcast, it’s staff, and their wives do not claim to be experts and/or authorities on thrash metal. Before threats of castration and the carving of the Slayer logo across our foreheads take place, remember this episode is being produced in a lighthearted manner and is only intended for entertainment purposes and to turn you on to some thrash metal that you may not know about. Thank you for your time and attention…..and put that knife away. – Editor

We kick things off a band that has been nominated by many thrash fans for Big 4 status, so Aaron’s pick of Testament is definitely warranted. With a rich history of metal music, Testament is still one of the tightest bands in thrash today. We take a listen to a track from their 1992 album The Ritual. 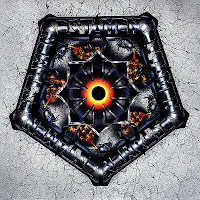 Chris’ first pick is, undoubtably, not what comes to most thrash fans minds when you think of the top of the heap of thrash. With that said, Onslaught, an English thrash metal band from the 1980’s, released a real gem back in 1989 with their In Search of Sanity album. This was their only album to feature the vocal stylings of former Grim Reaper front man Steve Grimmett (many will remember him from Beavis and Butthead). While Grimmett’s look caused a rather comedic reaction in many, there’s no doubt that the guy had some serious pipes.

Aaron’s next pick of a track from Suicidal Tendencies’ 1990 album Lights….Camera….Revolution! shows that thrash metal doesn’t have to always abide by a strict set of guidelines. S.T. were always pushing the genre envelope and this track shows that they could really pack a punch when it was called for but still maintain a swagger within the song to keep things interesting. 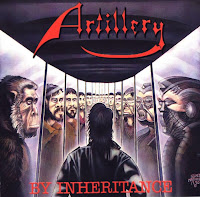 When you think of the upper echelon of thrash metal you think of Artillery…….right? Well, maybe not but Chris’ choice of a track from this Danish-born technical thrash band’s third studio album has this talented group showing off many twists and turns in their sounds complimented by some powerful Dio-esque vocals.

While Scott Ian and Charlie Benante are members of Big 4 act Anthrax, they are a part of another awesome New York-born thrash band from the 1980’s. The Stormtroopers of Death featured Ian and Benante along with bassist Dan Lilker and vocalist Billy Milano. Aaron’s track choice from their 1985 debut album Speak English or Die is a relentless number that will leave your ears pummeled with enjoyment. 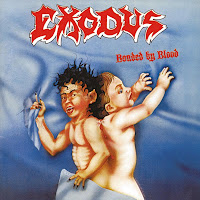 Whle Kirk Hammett is the longtime lead guitarist for Big 4 member Metallica, he helped form Bay-Area thrashers Exodus back the early 1980’s. Never getting their just-due, Exodus has released 9 albums since 1985’s Bonded by Blood release. Chris’ choice of track from that first album features some solid riffing by guitarist Gary Holt.

While we’re rarely focused on thrash metal on the show, one band that transcends that and has been played a number of times is Overkill. One of Aaron’s all-time favorite bands, it would be impossible to not include them on this list; especially considering how overlooked they’ve been by the mainstream music-buying public. His choice of a track from their 1991 Horrorscope release explains the band’s sense of gratitude towards that lack of support.

We close out the show with Chris’ choice of a band that is credited with helping develop the genre of thrash music in the first place. Originally from San Francisco and then via Aberdeen Washington, Metal Church formed in 1980 and took their influences from the New Wave of British Heavy Metal and added some speed and precision to help solidify the thrash metal genre with their eponymous release in 1984 and have been putting out quality material ever since. The band is still going strong to this day.