Feel The Balls Of Steel. A Steel Panther Concert Review. 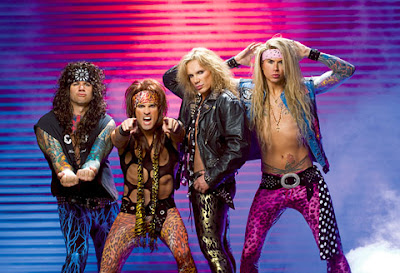 It was Thursday night and as our work day drew to a close, we began putting the finishing touches on our outfits for the Steel Panther concert. My trusty sidekick Victoria and I had been looking forward to the show for weeks now. Last time I saw Steel Panther it was the first opportunity in two and a half decades I had to wear my much coveted leather lace-up pants, so the wardrobe standard was set pretty high! We decided to double the awesome factor with matching outfits. Fish net stockings, short shorts,  high boots and skull bandanas!! Where else but at a Steel Panther show can you dress up in your best eighties gear,  party like a rock star and no one bats an eyelash?!  Stopping for a bite to eat on the way there, however, was a completely different story! 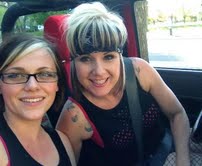 We drove to Toronto with the top down and our teased up, rocker hair blowing in the wind. It was a great beginning to what was sure to be a fun-filled night!!
We walked into The Sound Academy just in time to catch the opening act Hillbilly Herald. I’d looked them up on YouTube and they were just as I had expected. Loud and raunchy! They had that southern metal sound and were really talented, but not necessarily my kind of music. You only had to take one look at us to know we were only there for the headliners. 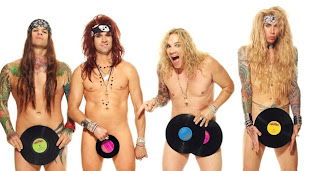 For anyone who doesn’t know Steel Panther, they are the Glam Metal equivalent to Spinal Tap. They are incredibly talented, enormously inappropriate, lyrically ridiculous and downright hilarious. Their story reads much like most moderately successful eighties hair bands. They payed their dues for years in the eighties playing night after night on the Sunset Strip and just missed their superstar calling. They are, in fact, a band who formed in 2000 under the name Danger Kitty and then Metal Shop, Metal Skool , and  finally Steel Panther in 2008.  Former members of  a Van Halen tribute band,  LA Guns and various other successful bands, they are each, in their own right, masters of their craft. They have an extremely loyal following and their fans are like no other.
After Hillbilly Herald had finished their set, we decided to move in for a better audience position. We made it quite close to the front but having been to more than one Steel Panther show I was fairly sure we would be retreating to a safer location once the show started. My co-pilot is just shy of five feet tall and she was being swallowed into the crowd already. For now though, we stood our ground.
The lights went down and Iron Maiden’s Number of the Beast came blaring through the speakers. The crowd went INSANE!!!!! Still we stood our ground. It was time!!!! The recorded  intro “In The Future” blasted out into the darkness and suddenly the band exploded onto the stage in their spandex, leather, glitz, glamour and full on eighties regalia!!
All hands were in the air with the symbolic Steel Panther three finger “Shocker” salute!! (Look it up if you’re not easily offended.) 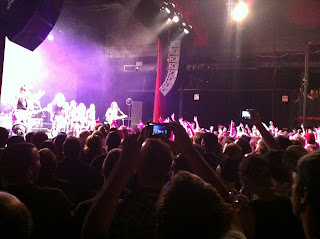 I looked at my brave little co-pilot and point
ed to the left side of the audience, she nodded and I grabbed her hand and dragged her through the sea of flying beer cans and inflatable dildos to safety.
Steel Panther was flawless as always both in talent and stunning good looks! Sexy Lexxi Foxxx had a full sized makeup mirror positioned at left stage so he could ponder his pure perfection at any given moment. You could say it’s a good thing Lexxi’s pretty!! What he lacks in intellect he more than makes up for in girlish good looks which he he isn’t afraid to credit Botox and Collagen for. 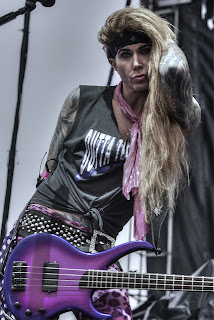 No Steel Panther show would be complete without a ripping guitar solo by the insanely talented shredder, Satchel.
He disappeared into a giant blanket of smoke during his killer solo which, along with his own stylings, was a kick ass medley of Maiden, Metallica, Rush, G&R, Black Sabbath, brought to a climax by a lovely little excerpt from The Sound of Music (Doe a Deer)
All the while Lexxi was stage left, destroying the ozone layer, applying lip gloss and practicing his best poses in his mirror. He doesn’t get to speak much and when he does, you realize quickly that  he’s merely there for his unequivocal beauty and his ability to hold down the killer bass lines like a true glam metal rock star.
They played all the crowd favorites. Death To All But Metal, Asian Hooker (as per usual a cute little Asian girl from the audience ended up on stage), Just Like Tiger Woods, Fat Girl (Thar She Blows), Supersonic Sex Machine, If You Really, Really, Love Me, and of course the beautiful acoustic ballad, Girl From Oklahoma (Suck My…well I’m sure by now you get the idea!) 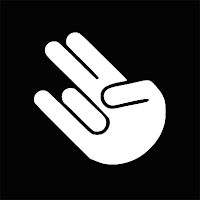 The girls started throwing themselves onto the stage for Community Property and by the time the band  hit their encore of Seventeen Girls In A Row, the whole crowd was literally jumping and the stage was a hot mess of Canadian boobies and debauchery!
And that, my friends, was that!! Another fabulous show in the city of Toronto and back to reality we head once again. Steel Panther is never a disappointment but definitely not for the faint of heart or the easily offended!! I’ll go back to see them again and again!!
Until  next time…