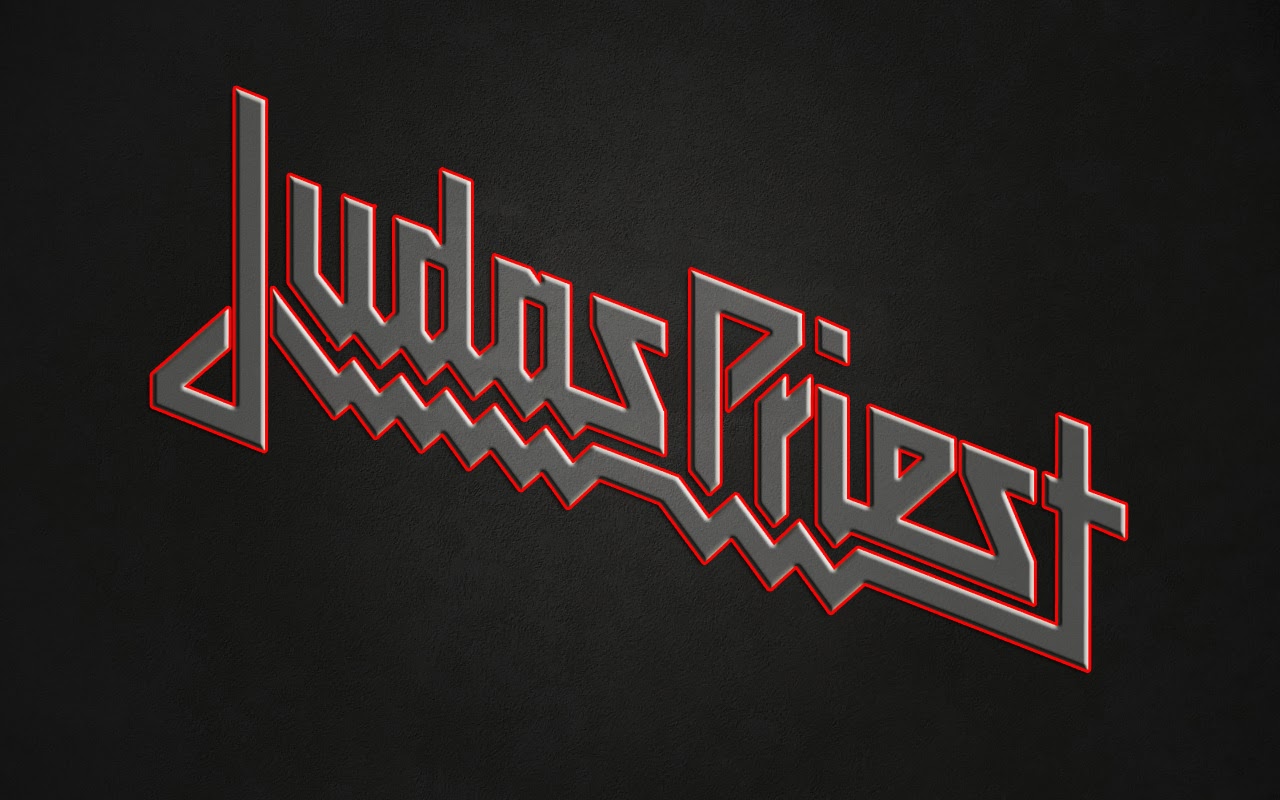 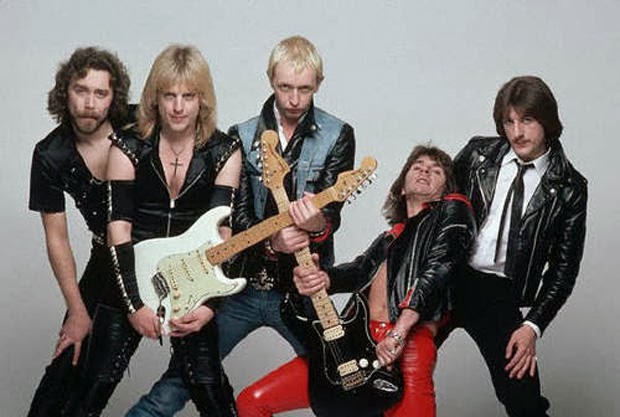 It’s undeniable, really: Judas Priest basically invented what came to be called “heavy metal.” The vocals, the twin lead attack, the galloping tempo, the studded leather, the lyrical themes. I love Priest but I am not your stereotypical metalhead or Priest fan because my favorite songs, for the most part, are the catchy songs, the ones with the hooks. So you’re in for surprise…you’re in for a shock…these are my personal top 25 favorite Judas Priest songs.
25. SINNER
This is the first song on their 1977 album Sin After Sin. The band were inventing eighties metal with a song like this. I love the tempo, the bridge, and the cool riff on the chorus.
Demonic vultures stalking, drawn by the smell of war and pain
24. FREEWHEEL BURNING
Another first song, this time from the band’s 1984 album Defenders of the Faith, which was definitely the band’s heaviest album up to that point. I am not as big of a fan of the record as most fans seem to be but this song is great.
Born to lead at breakneck speed with high octane
23. DEVIL’S CHILD
This is the last song on the band’s 1983 album Screaming For Vengeance, which is considered a classic but again is not one of my personal favorite Priest albums. Still it has its moments, like this rock nugget.

Your condition breeds ammunition, shoots me in the face

22. LOCKED IN
This was the second single from the band’s 1986 album Turbo, an album which I am most probably alone in preferring to the previous two. I think the song has a great bridge and cool chorus. Here’s an odd observation, this song probably would have worked on either of ZZ Top’s Eliminator or Afterburner albums, and the ludicrous video the band made for the song is endlessly entertaining.
I tremble and I quake when you shake the things you shake
21. THE GREEN MANALISHI (WITH THE TWO-PRONGED CROWN)
This song was a top ten hit in the UK for Fleetwood Mac in 1970. The song was written by the band’s founding guitarist Peter Green, who took too much LSD and left the band to join a commune. The original is good but Judas Priest’s version is one of my favorite covers of all time.
The night is so black that the darkness cooks
20. BEYOND THE REALMS OF DEATH
An epic metal ballad from the band’s 1978 album Stained Class and a precursor to Metallica’s “Fade To Black,” “One,” etc.
Is nothing worth this bitter cost
19. NIGHT CRAWLER
Judas Priest really shocked everyone in 1990 when they burst back on the scene with a juggernaut of an album called Painkiller, which really took the band’s previous album Ram It Down out behind the shed and, well, rammed it down. Great song.
Atmosphere electric as it now descends the stairs
18. EXCITER
This is the first song on Stained Class, which was recorded in 1977 and released in 1978. The song is undeniably heavy metal in every aspect, making it a very early example of a genre that would explode in the next few years.

17. UNITED
This is the last song on side one of the band’s classic 1980 album British Steel. The song is quite unique in its arrangement: a groove-based verse and folky bridge open wide into a huge chorus. It’s a great anthem for the fans. I suspect the band imagined a stadium full of metalheads singing along, lighters aloft.

We can do it and if they wanna they can try

16. DISSIDENT AGGRESSOR
This song was recorded at the very beginning of 1977, which is historically significant considering the fact that you’ll be hard-pressed to find anything recorded before it that sounded quite like it. The song is a very early example of what became the norm for heavy metal in the eighties. For example Queensryche were clearly huge fans of the song, and of course Slayer put it on South of Heaven. Great lyrics, great metal song title.

Through cracked, blackened memories of unit dispersal I face the impregnable wall

15. EPITAPH
Huh? A Judas Priest piano ballad? I think this is my favorite Billy Joel song. Are they serious? I think so, but I’m not sure. Halford clearly had fun singing the song. I love this song the same way I love “Just a Boy” from The Elder. It’s a good song, oddly conceived but well-written and well-executed. Great lyrics and the melody is spectacular. But you’re laughing at me, right?

14. ONE SHOT AT GLORY
This is the last song on the band’s 1990 comeback album Painkiller and it’s a simple but killer tune.

The power and the majesty amidst the blood and steel

13. ELECTRIC EYE
Everyone knows this, the opening tune from the band’s much revered 1982 album Screaming For Vengeance. My favorite part of the song is probably the bridge but the whole song is great, and again the lyrics are excellent.

I am perpetual I keep the country clean

12. TURNING CIRCLES
This is a great pop tune from the band’s 1981 transitional album Point of Entry.

We’ve all got somethin’ wrong to say

11. INVADER
Another excellent song from Stained Class. Driving beat, nice hook on the chorus and a great bridge before the solo.

And as I stood there mesmerized I heard my spirit scream

I rebel but I walk tall and I demand respect

9. STARBREAKER
This is a great riff-driven rocker from the band’s 1977 album Sin After Sin. A classic Priest song, great chorus. Quintessential.

Step out on the sidewalks if you’re feeling game

8. PARENTAL GUIDANCE
I just love the melody of this song from the band’s 1986 album Turbo, it’s beyond catchy, awesome bridge, just a great anthem and a nice FU to Tipper and the PMRC. Shoulda been a hit. Give this song a chance, it’s fun as hell.

How would you know anyway you’re just Mr. Dull

7. HELL PATROL
Another song from Painkiller, I’ve always loved this song, this is a galloper. Rob kills it on the chorus and he invents a new word (not the first time): PARATAMIZE. Love it.

6. DIAMONDS AND RUST
Wow, this is the second cover on the list, and another absolutely brilliant cover at that, of a Joan Baez song. This is the best kind of cover song: unexpected, reinvented, better than the original.

5. RAPID FIRE
This song from British Steel is sort of the insane, ludicrous heavy metal version of “Subterranean Homesick Blues,” a barrage of imagery at a very fast pace but what the hell is he going on about? I love it and the song features another invented word: DESOLIZATING. These creatures from Rob’s imagination are gonna fuck you up so badly he has to invent words to describe the carnage. Heavy stuff.

4. METAL GODS
Another one from British Steel. No Rob is not claiming to be a metal god, once again he is imagining the human race’s destruction. It’s a technology gone too far scenario. James Cameron turned the song into a film called The Terminator.

In secrecy this infection was spreading like a disease

3. TYRANT
This is a great song from the band’s 1976 album Sad Wings of Destiny. You really can trace the evolution of heavy metal through songs like this and “Dissident Aggressor” and “Exciter” and also the next song.

2. THE RIPPER
Yet another song from Sad Wings of Destiny. Many elements of what became heavy metal in the eighties are present in this song from 1976, the vibe and the imagery and the guitar tone and of course Rob’s soaring vocals. I suspect many people would find a song like this difficult to take seriously but I love it, it’s an absolute classic of the genre in my opinion.

1. EVENING STAR
This is such a great song from Killing Machine/Hell Bent For Leather. A very atmospheric intro explodes into the hooky chorus and the verse and bridge are excellent as well. It’s exactly what I like, a sturdily constructed pop song with a great hook. Very well done.

And now I understand at last what it means.What it all means.