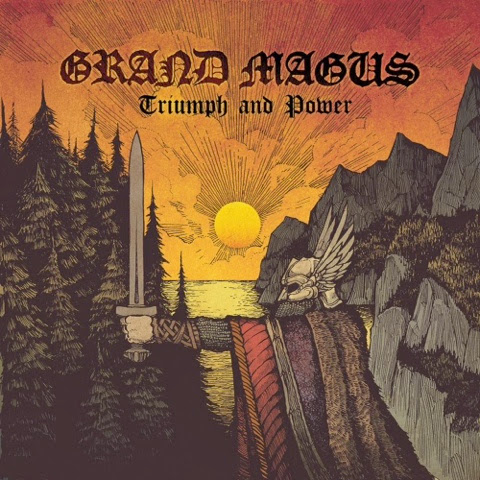 Grand Magus are a Swedish heavy metal band founded in 1996 by vocalist and guitarist JB Christoffersson and bassist Fox Skinner. Their first release came in 2001 and this years’ Triumph and Power marks their seventh studio release. Ludde Witt joined the band on drums in 2010 and is a big part of the sound of this album.

Grand Magus’ music is described as somewhere between the slower tempos and thicker heavier sound of doom metal and the groove laden bass heavy sound with melodic vocals that characterizes stoner metal. Overall, I would say that this album fits into that characterization and the production gives the sound and ancient feel that goes along with the lyrical themes. 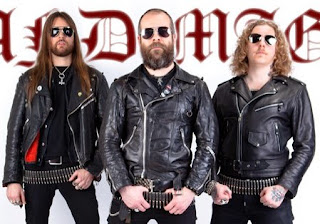 The album opens with On Hooves of Gold, which starts with the erie sound of a single acoustic guitar then this escalates into a plodding beat and a soaring vocal. The next two songs Steel Versus Steel and Fight are my favorites on the album. First is Steel Versus Steel which makes me feel like I’m in the middle of battle amongst ancient Vikings, I can almost hear the clinking of the swords. Fight has a solid riff and comes across as the anthem on the album. The title track Triumph and Power is a good mid tempo, groove laden song that really shows off how strong a vocalist Christoffersson is. Dominator is a strong up tempo song, but then it is followed by one of the two instrumentals. As far as instrumentals go, I’m not a big fan. I am sure that Arv and Ymer may add some atmoshpere to the record, but aside from some decent acoustic guitar playing and unusual sounds there is not a lot there. The seventh song is Holmgang which is a power rock song with some tasty guitar work. The Naked and the Dead is a decent song that probably has the fastest beat on the album. The album finishes with The Hammer Will Bite, which is an epic and powerful closer. It starts with the same acoustic opening that On Hooves of Gold does and then opens up great hard rock riff. Great song to close out the album.
All in all, this is a very competent heavy metal album but does not really break any new ground. If each song was worth one point, I would give this album a 5 out of 8.(I do not count instrumentals)