Sometimes as a fan, you tend to forget that the people you idolize are human too. In tenth grade, I wanted to play the drums. I signed up for beginning band class, and my parents bought me a set of drumsticks, a practice pad, and a book for beginning drummers. In all, they spent maybe $50.  I had big dreams of moving to L.A. and becoming a drummer in a band much like my idols. I, at that time, had a thing for Audie Desbrow, Tommy Lee and Tico Torres. They were cute, yes, but to me some very talented drummers. I knew this was  my destiny.

FAST FORWARD.The drummer thing never took off. i was not blessed with the gift of rhythm and coordination. I also got a D in the class, but I was, however, very good in explaining current events and music. So I took up writing instead. Recently, I sat down to do a phone interview with Great White’s own thunder god Audie Desbrow. We left no stones unturned, we were kind with our words, and yes, we even shared the toys…lol. No, really, we chatted about the past, present and future of Great White. 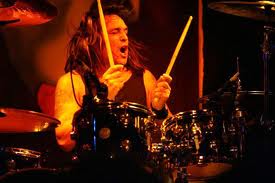 DBG: Congratulations on your recent 30y anniversary. Tell me how you guys are trying to keep your stage show fresh for your original fans and your new generation of fans?

Audie Desbrow: Well, creating new music helps keep it fresh. We have a new record out now, and the fans are really taking to the album. Terry has just been a blessing. He brings a lot of energy to the stage and to the band also.

DBG: Well, with Terry Ilous as the groups lead singer, what has he brought to the band to keep this momentum going?

AD: Terry is a monster on stage. His energy is contagious. He has a great energy and his vibe is awesome.  He has great creativity, in the studio and on stage. The fans are loving it and Terry is too. 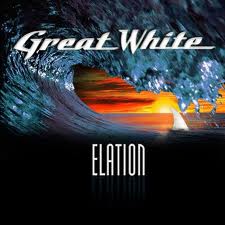 DBG: You’re a core member of Great White. Tell me about the early years of honing the Great White sound.

AD: Our first album was more metal. As time went on, we were more to our roots, our blues rock roots. When we did ‘Sail Away’, we used and experimented and used different instruments. I toned my drumming down. We tried to stay true to the sound. As far as what we do now, we just try to keep it modern and stick to our roots.

DBG: You have a new singer, Terry Ilous and a new album called Elation. How have the fans taken to Terry being in front and not Jack Russell?

AD: Well, we just got back from Europe. The fans were awesome and Europe was too!! We were gone for a month. We went to Germany, Spain, France and Amsterdam. It was awesome because terry was talking to the crowds in Spanish in Spain, he’s speaking French to the crowds in France. It was just great, the whole experience as just great.

DBG: Jack Russell, was the original lead singer, and recently he parted ways with the group. Is there a chance that maybe you and Jack maybe able to do a reunion tour?

AD: I don’t see that happening. Jack is trying to sue us for the name. Over time things change, people change, you grow older. It was a risky move yes, because Jack was the up front guy; people knew Jack Russell with Great White. It was a risky move, but it paid out in the end though.

DBG: ‘Elation’ is a great album, and its your twelfth studio album. How much of a role did you play in writing on this album?

AD: This album was an entire band effort.  It was nice to do it like that. We demoed like 24 songs, and we recorded 12. When we went into the studio, we would start writing and we would get into a zone and we would just write like crazy. It was awesome to have that vibe. We recorded this album in 38 days.

DBG: ‘Feeling So Much Better” is peaking on the classic rock charts. Tell me how this time is different from say 20 plus years ago when say ‘Lady RedLight’ was on the charts.

AD: When ‘Lady RedLight” was out, it was about the party, there was a certain look and style. At that time, it was about having fun. The music then was about partying, having fun and just living life. Now-a-days, the music is more negative, its angry and it reflects whats going on in the world today. I haven’t listened to the radio in a long time. I have my iPod shuffle with over 1,000 plus songs and I listen to that. I like Godsmack, Three Days Grace too. I still enjoy our music and the music groups that were out at that time. Generations change, fans change. Our fans are older and wiser. They have kids now, and some of those kids are listening to us now.

DBG: What new songs would you say the fans are getting excited for?

AD: We try to make sure we play our old songs along with our new catalog. We don’t want to bombard the audience with all old material. So we mix the new album in with our old material. ‘Lowdown’ is the next single to come out, so we’re playing that now during our live shows.

DBG: The Rock and Roll Hall of Fame nominations were revealed earlier this month. For the first time, the academy is letting the fans vote. Who would you like to see inducted in the Hall? 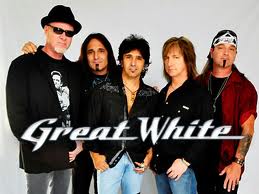 DBG:With that being said. Do you feel that Great White will be able to eventually get a nod into the Hall, or do you feel like the Station Fire tragedy will keep the band out?

AD: There are people that will always be angry at us for what happened. It was a tragic night for all involved. We haven’t played in Rhode Island since that night, and Jack hasn’t gone back since that night. The only other original member there was Mark (Kendal). It really would be great if we could go there. I hear fans say we should come there and play. The fans really want us to come back. I hope in time we can go to Rhode Island, honor those that perished and be able to heal not just us, but heal everyone that was affected by that horrible night.

DBG: Thirty years is a long time. You’ve undergone a lot of changes, some for good, a few for bad. What do you see happening for the next 30 years?

AD: I would love to see us still together in 30 years. But we’ll probably be in a old folks home, (lol). But if our health is still go
od, then we will probably still be playing together.  We have learned to accept each others faults, and we’ve been together for a long time.

It really was a great honor to interview a great musician that I am not only a fan of, but I respect musically. I hope you all enjoyed my interview, and stay tuned for the concert review.