HaleStorm-ing The Opera House in Toronto

I am one to avoid, like the plague,  anything pop culture or popular in every way shape and form.  So when someone talks to me about a band that has won Grammy awards I usually tune right out, not caring in the least what the popular fad may be.  This is probably one of the main reasons that Halestorm from Red Lion, Pennsylvania had slipped past my radar, discovering them only recently with their latest release, an EP of cover songs entitled ReAniMate 2.0. reviewed on Decibel Geek by none other than Wallygator Norton (Re-AniMate 2.0 Review).  Liking what I found in the EP, especially singer Lzzy Hale’s vocal prowess, I spent some time on my old friend “You-Tube” to check out more of Halestorm.  When they rolled around to Toronto and I was asked if I was going to the concert the answer was a resounding yes! 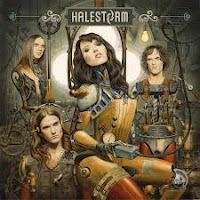 Lzzy Hale and her brother Arejay both started their musical journey with the piano at the young age of 5 years old before eventually upgrading to drums for Arejay and guitar for Lzzy.  The siblings have been creating original material since they were 10 and 13 respectively and the early stages of the Halestorm band featured their father Roger Hale on bass guitar.  Guitarist Joe Hottinger was recruited in 2003 and current bassist, Josh Smith replaced Roger in 2004.  Halestorm has released three EP’s (Don’t Mess With The) Time Man in 1999, Breaking The Silencein 2001 and One and Done (live) in 2006 with their first full length album, Halestorm, dropping in 2009.  The album was received positively and produced singles and videos for the songs “I Get Off”, “It’s Not You”, “Love/Hate Heartbreak” and “Familiar Taste of Poison”.  2010 saw the release of Live In Philly, a CD/DVD collection recorded at a show in Philadelphia earlier that year.  An EP of cover songs from a variety of genres called ReAniMate came in 2011, putting Guns n’ Roses’ “Out Ta Get Me” on the same album as Lady Gaga’s “Bad Romance”!  Halestorm gave their audience a teaser to the upcoming second full length with the four song EP Hello, It’s Mz. Hydein early 2012 with the album The Strange Case Of…following on April 10 (co-incidentally both mine and esteemed Decibel Geek cohort 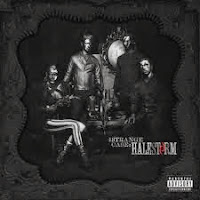 Wallygator’s birthdays!).  The song “Love Bites…(So Do I)” from The Strange Case Of… was nominated for and won a Grammy award for Best Hard Rock/Metal Performance.  Other singles and videos from the latest album include “Freak Like Me” and “Here’s To Us”.  Creating the reputation of non-stop touring, Halestorm has set and shared the stage with acts such as Bullet For My Valentine, Seether, Heaven & Hell, Staind, Buckcherry, Papa Roach, Avenged Sevenfold, Shinedown, Disturbed, Theory of a Deadman and Hellyeah as well as appearing at festivals such as the Rockstar Energy Drink Uproar Festival and Japan’s Loud Park Festival. 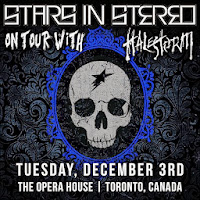 Arriving at The Opera House on Queen Street East in Toronto around 7:30pm I found that the place was already quite packed with a variety of age groups from folks with grey hair to teenagers and certainly a noticeably higher ratio of female patrons than my usual rock show attendances.  Stars In Stereo from L.A. took the stage around 8pm.  There was not much room on stage for the quartet and their stage gear and the drummer had to be situated off to the left side quite close to the

stage front.  Both the guitarist, Jordan McGraw, and bassist, Frogs McCormack, exhibited a great energy and presence calling and motioning for the crowd to get their hands in the air and let them hear us.  The singer, Bec Hollcraft, led the band well through their loud and fast compositions, such as “Dealing Secrets”  and a great closing song that I think was called “Gunshy”.  All while drummer Drew Langan pounded out the beat from his side stage position and over all the band was a good fit for Halestorm.  I had never heard of Stars in Stereo before, but now I rather regret not acquiring their CD (provided there was one for sale) at the show and will get to work scouring the internet for it in the next few days.
STARS IN STEREO WEBSITE   STARS IN STEREO FACEBOOK   STARS IN STEREO TWITTER 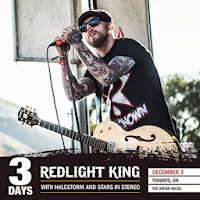 Next up was Redlight King, another band that I was unfamiliar with and was actually quite ashamed of my lack of familiarity when they announced that they hailed from Hamilton, just down the road from Toronto.  Some post show research finds that the founder/songwriter/vocalist Mark Kasprzyk, better known as Kaz, now lives in Los Angeles California.  Kaz faced some adversities in life that included victoriously battling substance abuse and a shot at Canada’s Olympic Training Center in preparation for the 2000 Olympics as a competitor in
Judo.  He was also nominated for a Juno award (Canada’s Grammy’s) in the Best New Artist Category.   Redlight took us through a rousing set that reminded me somehow of a heavier Tragically Hip and 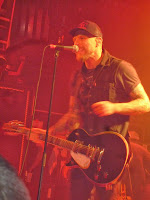 announced that they have performed over 400 shows in just four years, again I say how have I not heard of these guys before?  Maybe I should actually start listening to the radio?  Original compositions like “Built To Last”, “Caught In The Middle” and “Bullet In My Hand” (apparently the video for which was in constant rotation on MuchMusic, Canada’s MTV…..anybody else remember when they used to actually play music?) all brought enthusiastic reactions from the crowd, many singing along especially to the chorus chant of “Bullet In My Hand”, their set closer.  Another album to search out for purchase and who knows, maybe you’ll even hear Redlight King on next year’s Hoser Episode of the Decibel Geek Podcast, provided Chris and Aaron invite Wally & I back to host again!
REDLIGHT KING WEBSITE     REDLIGHT KING FACEBOOK     REDLIGHT KING TWITTER 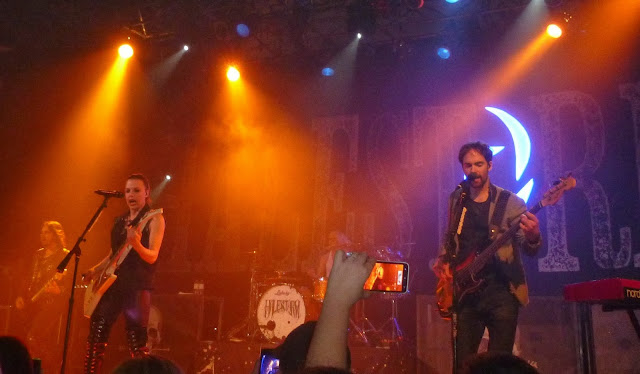 Lzzy Hale, all smiles, led Halestorm on stage amidst cheers and shouts from the crowd like “I Love You Lzzy”.  They wasted no time in charging into “Love Bites…(So Do I)” and the audience was immediately singing along with her, matching her every word.  Halestorm stayed with The Strange Case Of…album for “Mz. Hyde” before going back to the self-titled début with “It’s Not You”.  Lzzy took a moment to address the crowd briefly and calling for “horns high” as they returned to the latest album and roared into “Freak Like Me”.  Arejay, Lzzy’s younger brother and 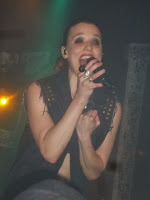 Halestorm’s drummer began to exhibit quite the show by throwing his sticks in the air, jumping around while drumming and playing catch with his drumsticks with someone to the side stage, of which I believe he may have missed more than he caught!  His antics quickly reminded me of “The Monkey Drummer”, Zoltan Chaney, drummer for Vince Neil and Slaughter and couldn’t help but wonder if Zoltan was an influence or idol for Arejay Hale.  “You Call Me A Bitch Like It’s A Bad Thing” showed how Lzzy Hale captivated the crowd and owned the room with the intensity of her powerful voice and facial expressions as she gave it all she had to give.  Back to the début for “Innocence” took us to an impromptu “Halestorm” chant from the audience egged on and led by Arejay’s drum beats.  The Strange Case Of…(Deluxe Edition)provided us with the bonus track “Don’t Know How To Stop” before Lzzy let us know that her really cool parents raised her on things like Black Sabbath and Van Halen.  When she was going to concerts there were not as many girls in the audience as there were here tonight, she noted and dedicated the next one to her “Daughters Of Darkness”.  “Rock Show”, written about the powerful experience of attending a rock show, came next after which we were treated to Fleetwood Mac’s “Gold Dust Woman” recorded for Halestorm’s aforementioned ReAniMate 2.0.  After an emotional presentation from Lzzy of “Familiar Taste Of Poison” she announced that it was time to let her little brother Arejay off his leash as he took the spotlight for a drum solo that included playing with his hands, lots of stick throwing, oversized novelty drumsticks, jumping around, praise for Canada with foods such as 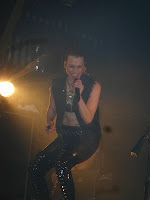 poutine and of course our beautiful women, saying he felt like The Muppets “Animal” chanting “Woman, woman” when he’s up here.  Again I couldn’t stop thinking of when I’d recently seen Slaughter and drummer Zoltan Chaney’s antics that he exhibits on stage.  Another cover off of the latest EP was delivered in the likes of Judas Priest’s classic “Dissident Aggressor” closely followed by “Nothing To Do With Love” before Lzzy let us know that she loves Toronto….”and if you go one step further Toronto, you might even say I get off on you getting off on me” she quoted the chorus amidst laughter as the band ripped into “I Get Off”.  Daft Punk’s “Get Lucky” led the encore performances actually making it into a good song and I never once would have thought that I’d be singing that to myself the next day at work, but I was!  “I Miss The Misery” brought us to the final song of the evening with “Here’s To Us”.  During this final song a Canadian Flag made it’s way onto the stage and Lzzy displayed it for all to see, showing it’s writing of “Toronto Freaks” and the tour date marked in the centre leaf.  Halestorm, led by the charismatic Lzzy levelled the Opera House in Toronto that night and their popularity was shown by the number of comments I received on my Facebook “check-in” at the event which usually garners one or two comments/likes to more than triple that this time around, many from lady friends who proclaim to “hate my music”! 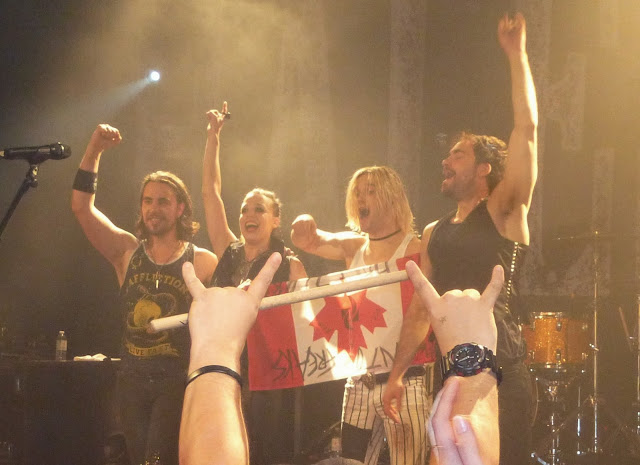