Halloween With The Prince of Darkness, Alice Cooper (Photo Gallery by Brian Ronald) 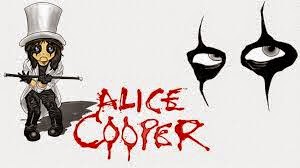 Halloween night, all Hallow’s eve.  The little ghosts and goblins, witches and superheroes have filled the streets begging for candy treats.  What a night to see the Prince of Darkness!  T 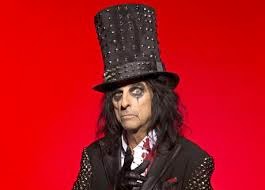 hat’s right the master of the macabre himself, Alice Cooper, delivered a headlining performance at Centre in the Square, Kitchener and Decibel Geek‘s Brian Ronald and The Meister were on hand for the event.  In an adventurous and lengthy public transit trip out to Kitchener I met Brian at the train station and we headed over to the venue close by.  We were admitted into a waiting foyer already containing many concert goers, but the door to the actual auditorium remained closed.  A couple of beers from the bar and we waited noticing that there was quite a high number with “Alice Cooper” eye make up on and white tailcoats.  When the doors were opened and we were admitted into the actual auditorium, I was surprised at it’s size.  Smaller than I had thought, actually a good size for a show, not too damn big like a lot of places.  And we had fifth row seats, even better!

Like many of us I’m sure, Alice Cooper has been a part of my rock listening since the early days of it’s formation.  I still remember buying the Killer album on 8-track at a garage sale, likewise with my School’s Out LP.  Tonight’s show was rather fitting in a few ways.  Halloween with The Prince of Darkness for one, but also my first heavy metal concert, the start of what several deem an unhealthy obsession, had been none other than Alice Cooper on his Trash album tour in 1989.  That show had taken place on New Year’s Eve that year and now this one on Halloween prompts me to wonder when he’ll be coming around this way on Easter?

This event made the fourth time I would be seeing Mr. Cooper this year.  As had been in the case in the other times I’d seen him “The Underture” led the band on stage followed by a little of “Hello Hooray”.  The whole band was adorned with what looked to be plastic Halloween masks for the occasion and things erupted with “House of Fire”, crowd singing along.  During “No More Mr. Nice Guy” Cooper held the mike out into the first rows of the audience to better catch their voices as everyone in the Center in the Square sang with him.  By the end of the song we had already seen two plastic (I think) batons tossed into the crowd and Cooper seemed rather more engaging with us than usual, but that may be because I’m much closer to the stage than usual as well.  “Under My Wheels” brought a little triple threat guitar solo as guitarists Ryan Roxie, Tommy Henriksen and Nita Strauss displayed their talents.  With the masks now removed, accept bassist Chuck Garric who chose to keep the lower half of his face covered in the green jaw of a skeleton, “I’ll Bite Your Face Off” was the next selection.  Guitarist Ryan Roxie performed some pic tricks, tossing his guitar pic up into the air, catching it and continuing to play or sometimes deflecting it out into the cheering mass of fans.  Nita Strauss, the newest member of the Alice Cooper band replaced

Orianthi earlier this year.  Strauss seems to have really made herself a part of the show through her interactions with the man himself and good for her.  It’s great to see her doing so well, such a nice lady when we met on the cruise and an absolutely wicked guitarist to boot.  “Billion Dollar Babies” saw Alice waving a rapier sword filled with Alice Cooper “Monopoly” money around, periodically releasing the green and yellow bills to shower the first few rows.  The newer composition, “Caffeine”, saw him with a huge coffee mug and “Department of Youth” brought a young girl toting a newspaper and backpack appearing to be looking for a job across the stage.  Alice tossed his riding crop out very close to Brian and I, but sadly not close enough for my T-Rex-like short arms to reach.  I reflected on how an Alice Cooper show is so much more than just a concert.  An incredible showman, attending one of his concert events is something to see as every song has a gimmick and stage act rather than just standing up there delivering the songs, never a dull moment.  “Hey Stoopid” took us to “Dirty Diamonds” and more than a few diamond (plastic I’m sure) necklaces being flung out from the stage.  “Dirty Diamonds” also contained the solo portion of the evening, something I’m not usually overly fond of as I don’t play and it often just sounds like a noodling noise to me, but here the band tastefully takes care of things

incorporating bass, drum and guitar.  “Welcome to My Nightmare” saw Alice wrapped about the neck and shoulders with a huge snake and during “Go To Hell” he snapped a large bullwhip.  I was pretty sure that the snake wasn’t, but I couldn’t help wondering if the bullwhip was coming out this way as it seemed that every song saw a souvenir for the crowd.  The song written for Friday the 13th Part VI: Jason Lives, “He’s Back (The Man Behind the Mask)” brought the young “Department of Youth” girl back onto the stage sporting a “Jason” mask to stab Cooper.  “Feed My Frankenstein” had Cooper dressed in a bloody lab coat and turned into a huge Frankenstein Monster during the song.  I was also fortunate enough to snag myself a Tommy Henriksen guitar pic that had floated it’s way out from the stage.  A nurse and a straight jacket were the next stage props for “Ballad of Dwight Fry” during which Cooper breaks free of the re
straints and strangles the nurse from behind.  The nurse prevails and stabs him as orderlies restrain The Prince of Darkness once again.  The ceremony includes a massive guillotine to sever the head of Alice Cooper which gets paraded about the stage to a

background of “I Love the Dead”.  See what I mean about an Alice Cooper show?  There’s more than just the music to entertain you.  In a segment paying tribute to a few late great musicians the band now took us through covers of The Doors “Break On Through (to the Other Side)”, The Beatles “Revolution”, Jimi Hendrix‘s “Foxy Lady” (featuring a showcase of Nita Strauss‘ talents) and The Who‘s “My Generation”.  Each song saw a tombstone displayed at the front of the stage, paying homage to the late musician in question.  A bent, twisted and bloody crutch was the stage gear for “I’m Eighteen” before “Poison” brought the end of the regular portion of the event.  The band returned shortly for an encore as bubbles filled the stage spilling out into the audience.  The loud ringing of a school bell signified it was time for “School’s Out” during which lengthy, glittery streamers doused the crowd and gargantuan balloons bounced from the stage and around the throng of cheering Cooper fans.  A little teaser of Pink Floyd‘s “Another Brick In the Wall Part 2” and the band introductions all came before the end of “School’s Out”.  After the song each member of the band toting a plastic pumpkin bucket tossed Halloween candies by the handful over the heads of the assemblage to end another awesome Alice Cooper event!

Gallery of photos from Brian Ronald