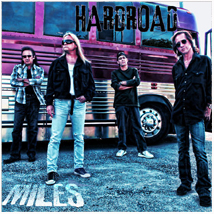 Many of you are probably aware that I originally discovered the Decibel Geek Podcast while doing a google search on Russ Dwarf after catching one of his local shows up here in Toronto. I was looking to read some reviews on the show and stumbled across his interview with Chris and AAron. So I guess you could say that Russ is somewhat responsible for setting me on the path of rock and roll journalism.

So on the night of the Russ Dwarf show he played a tune called “Miles” off a new CD called of the same name from his new project “Hardroad”. A great melodic classic rocker, “Miles” is kind of a Journey meets the Killer Dwarfs kinda feel and I loved it straight away. After the show I was pleased to see that the Hardroad CD was available and of course it was quickly added to my music collection.

This week on the Camaro’s Cut Out Bin episode, one of the albums that they uncovered was the Hardroad CD. Now since Aaron got the CD for free, it was included in the show about Camaro’s music on the cheap, BUT it is far from a “cut out” selection and ALL the tracks here made it into my IPOD.

Simply put, this is a straight ahead classic hard rock record. The songs are melodic, powerful and Russ’ vocals have never sounded stronger. Real musicians, playing real songs. From the hard rockers “Hardroad” and “Tempted” to the softer songs “Miles” and “Out Of My Mind”,  It’s a refreshing change from all the processed, auto-tuned, overproduced fluff that fills the radio today. If you dig your hard rock with some kick, this is a great album. If you love the Killer Dwarfs, this is a GREAT album! 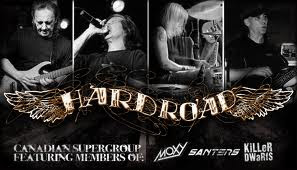 Decibel Geek: So Russ, what is going on?

Russ: Been a rough day we just sold our house, trying to get ready for this fucking tour, trying to finish the new CD, and pulling my fucking hair out, whats left of it (laughs) I am just a cranky old bastard. (laughing). So, what’s going on?

Decibel Geek: Well last week on the Decibel Geek podcast, Chris and AAron played one of the Hardroad tracks and keeping in the theme of the show I decided to write up a review of this very fine CD. So I got to thinking, why not make it a little extra special and have you share the story of Hardroad.

Russ: Well basically what happened there was this record company up here in Canada and through some friends of mine, Gino Scarpelli from Goddo. He called me and said there were these guys and they wanted to put this band together with a whole bunch of other people. Earl Johnson from Moxy, Gino Scarpelli, ahh who else was involved Rick Lazeroff from Santers. So the idea was to get together and play some gigs, playing music from all of these bands you know? Well we got together for rehearsals and Earl and I really hit it off, Gino and I had been friends for 25 years and we just kind of got away from the original plan and just started writing some tunes. Then at one point we needed a drummer because our original drummer just didn’t work out so we got Morgan Evans who was with Lee Aaron, he’s a good Canadian boy. So Earl and I wrote these tunes and we figured “fuck it” let’s make a record because we have been playing our own songs a million times so why not.

In the meantime Moxy had just parted ways with Alex who was their singer for a couple years and they asked me to join the band so I have been singing with them now for the last four years. Anyway we wrote the record and a friend of mine who I’ve known for over 25 years, Fred Duvall has a studio up here that I am really comfortable with. So we went in and we kind of did it fast but it’s just a classic rock album from guys that are that age, we’re not trying to be something we’re not. I think we got some really nice tunes on it. In fact I play a couple of these songs in my solo band, I am proud of those tunes.

We released it in Canada and stuff but you know there’s no record companies anymore and nobody really gives a shit about CD’s, its a tough go, IT’S A HARDROAD man (laughing). We sent a tune to radio and got some play but we all have other things going on. I have my own band and basically we are still alive, Earl and I will be writing some new stuff because we enjoy writing together but it was a great project. It’s a good little rock record you know and we played a few shows, we are just having fun with it. we parted ways with Morgan and Rick because they wanted all the money and Earl and I are old and greedy, that’s what they said anyway but I love writing with Earl, he’s a Canadian legend.

Decibel Geek: Any Hardroad shows in the works or just doing your own thing? 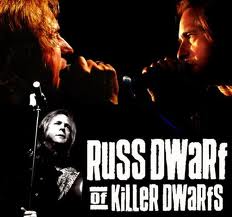 Russ: Right now I am just doing my own thing, just finishing up the new Russ Dwarf “WiREleSS” CD. It’s like 11 or 12 Killer Dwarfs tunes that are my favorites done acoustically playing with some of my closest friends that I have known for years and we have just had a lot of fun making this record. It’s done and ready to mix but now our engineer has come down with the flu just like everybody seems to be getting. I will only get it when I have a gig coming up.

We had some other friends of mine come play on it. Glen Drover (Megadeth) came in and played a solo on it, Bumblefoot played a solo on it and a whole bunch of local guys that I love came in and played on it. I am starting a tour on March 5th in the States and working my way down to Florida for the Monsters of Rock Cruise from the 16th to the 20th. Then working my way back up and then I am moving to the country and you will never hear from me again (laughing).

Decibel Geek: Very cool, well before I let you off the hook. What’s the news with the Killer Dwarfs? I remember when you were on the show, there was talk of a Documentary being made.

Russ: Oh yeah I forgot about that. There is a documentary being made that’s been worked on for the last couple years but there is so much junk going on that it takes time to get everything together but it will happen. Just a matter of time but it’s well under way, it’s called Tall Tales.

Decibel Geek: A little bird also mentioned to me that there might be a new “unreleased” Killer Dwarfs record that might see the light of day?

Russ: Yeah that might happen too, there is an unreleased KD album that was recorded with the “Method to the Madness” lineup and I am just sitting on that right now while I get this other stuff done. I am hoping to put that out it’s a great little record, it’s like a time capsule. The playing on it is great and I like the songs and it seems to stand up and it seems there are people out there that want to hear it. So that will happen, that’s called “Start at One” so we take it one day at a time.

Decibel Geek: So I just saw the teaser video for the new “WirELeSS” CD

Russ: And what did you think?

Decibel Geek: Can’t wait! Love those songs, and to have them stripped down and new and fresh will be awesome.

Russ: Beautiful, thank you man and come o
ut to a show some time.