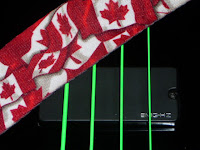 Back for another round of Canadian Metal. Growing up a metal fan in Canada through the 80’s was interesting. We had our own version of MTV called MuchMusic and we would see all of the great hard rock and heavy metal coming from the USA and the other “international” artists but we also got to see plenty of our own “Canadian” bands that were rocking the radio and video screens.

As a kid I was under the impression that if you were on TV you were a huge, successful and probably rich rock star. Remember this was pre-internet and we would see these bands interviewed and played alongside Motley Crue, Kiss and Ozzy. Our homegrown music industry contained many bands that we considered household names (because we saw their videos on TV all the time) never really realizing that someone in Tuscon or Miami or Nashville may have never even heard of them.

So this instalment of Hoser Heavy Metal, I bring you…KICK AXE.

KICK AXE came to be in 1976 in Regina, Saskatchewan but relocated to Vancouver, British Columbia where the music scene provided more action for up and coming bands. Kick Axe worked hard on the Vancouver club scene but had their eyes on something bigger. After singer Charles McNary left the band in 1981, the remaining members Larry Gillstrom (guitar), Victor Langen (bass), Brian Gillstrom (drums), Raymond Harvey (guitar) spent the better part of 2 years searching for the perfect replacement to take them to the next level. After an exhausting search they decided on George Criston and that’s when things got rolling big time for the band. 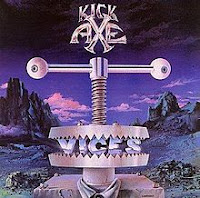 1983 saw Kick Axe sign a major label deal with Pasha Records and enter the studio with Spencer Proffer (Spencer Proffer of Quiet Riot/WASP fame). The result became their debut album entitled VICES. Lead off single “On the Road to Rock” got heavy rotation on Much Music followed up by the classic “Heavy Metal Shuffle”. Vices is a metal masterpiece with absolutely no filler. In fact Vices was picked number 12 by author Martin Popoff’s “Top 100 Metal Albums of the 80’s”.

The day that Vices was released they played a gig in Calgary on the same night that Judas Priest happened to be playing in town. The story goes that while Rob Halford was being interviewed at a local radio station, a number of listener calls came in urging Rob to check out the up and coming band. Much to the surprise of Kick Axe he did and the Metal God must have been impressed because days later when Kick Axe rolled into Winnipeg, Judas Priest surprised them again with an offer of an opening slot on Priest’s US tour. After many months of non stop touring with the likes of Accept, Whitesnake, Helix, Quiet Riot and the Scorpians they headed back into the studio. 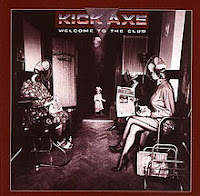 “Welcome to the Club” was released August 22nd 1985. A solid sophomore release, WTTC featured some killer tracks “Comin After You”, “Hellraisers”, “Too Loud … Too Old” and my personal favourite “You Can’t Take it With You”. The band invited some friends to help out with a cover version of “With a Little Help From My Friends”. Lee Aaron, Rik Emmitt, Andy Curran and other Canadian Musicians joined in for a great cover of the Lennon/McCartney classic. A slicker more polished sound this time around, Kick Axe seemed to be on top of their game. The band toured the country as a headliner playing in arenas and theatres through 85 and 86. Unfortunately the radio support wasn’t as strong as for the debut album and guitarist Raymond Harvey left the band in 86. 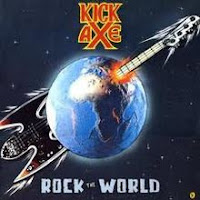 Continuing on as a four piece, Kick Axe released their third album “Rock the World” with a more stripped down back to basics sound. A solid record featuring the title track, “We Still Remember” and a KILLER COVER of Fleetwood Mac’s “The Chain”. Unfortunately for the band and it’s fans
the band soon was shut down due the actions of a rather unscrupulous manager who left the band in a legal and financial bind that literally forced them out of the game. For years they could not legally continue as Kick Axe and the band broke up.

With the legal issues apparently behind them, 2003 saw Kick Axe reunite with former member Gary Langden on vocals. A new album “IV” was released and Kick Axe now fronted by Daniel Nargang continue to play shows and festivals in Canada.

NOTE: I was lucky enough to see KICK AXE live back in 1985 while they were touring the Vices record. An amazing high energy show from some incredible musicians. Vices will forever be found proudly in my IPOD. In the words of Martin Popoff Vices is “a necessity of life…10 out of 10”