Greetings from the Great White North. Welcome to the first instalment of “Hoser Heavy Metal” where I will feature some of the best “metal” and “hard rock” to come from Canada.

Canada has been home to many great Metal/Hard Rock Bands some became household names(ala Rush and Triumph), some have been named as influences for other great bands (ala Anvil) and others that made successful careers simply north of the border. All in all there is a ton of great music that you may or may have never heard, from bands you may have never even known.

Each instalment I will highlight a new Canadian Band. One of the things I love about Decibel Geek is how it has gotten me to revisit some of my old cd collection and has also had me looking for some “new” additions as Chris and Aaron play some bands I never knew or never gave a chance back in the day. So, for your “dining and dancing” pleasure I present to you…

Brighton Rock. This five  piece band out of Niagara Falls, Ontario was one of those bands that in my opinion “should” have been massive. They had all the right ingredients to really hit the big time.

They were signed to WEA records in Canada and released three albums between 86 and 91. An incredibly tight live act, they toured extensively in Canada and always delivered an kick ass show.

Comprised of Gerry McGhee (vocals), Greg Fraser (guitar), Stevie Skreebs (bass), Mark Cavarzan (drums) and Johnny Rogers (keyboards/guitar) they played radio friendly heavy metal that in my humble opinion could be put right alongside the Motley Crues, the Def Leppards and the  Kiss releases of the time. 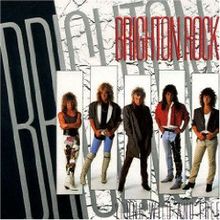 Their debut release “Young Wild and Free” hit the shelves in 1986 delivered 2 single “We Came to Rock” and “Can’t Wait for the Night”. Brighton Rock’s Vocalist Gerry McGhee really brings the band it’s signature sound, his voice is unique and powerful as hell. I rank him very high in my favourite vocalist list.

Their second release “Take a Deep Breath” was commercially their most successful album. Spawning three singles it went to 22 on the Canadian album chart and was certified Gold. Check out “Power Overload” and “Shooting for Love” as standout tracks.

It was their third album when Brighton Rock really came into their own. On “Love Machine” producer Toby Wright pushed the keyboards aside and the band released a world class metal album with guitars front and center.

Lead off track “Bulletproof” is a thrashy high octane rocker that sets the tone for a heavier Brighton Rock. “Hollywood Shuffle” and the title track “Love Machine” keep the party rolling but it’s track number 7 that still gives me chills. “Nightstalker” lyrically tells the story of serial killer Richard Ramirez and the song is dark, heavy and brooding. Also noteable the killer cover of Clapton’s “Cocaine” was recorded in 1 take. Unfortunately the timing of it’s 91 release was the same time the hair metal bands were being washed away by the Seattle movment and Brighton Rock broke up in 92.

That said the three albums they put out contain some great tunes and the band have since reunited for some select shows. I was able to check them out in 2009 at a benefit show and all these years later they still have all the chops intact, including Gerry’s pipes! 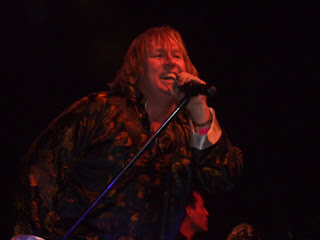 Do yourself a favour and check out Brighton Rock.. If you like metal and I know the Decibel Geek fans do than I really think you’ll dig them.