In Volume 2 of the Hoser Heavy Metal blog I spotlight one of the hardest working Canadian bands and truly a legend in Canadian Heavy Metal. In this volume we take a look at the career of…

Helix! Give me an R-O-C-K! What you got? ROCK! Helix are an old school band hailing from Kitchener, Ontario. Brian Vollmer has held down the vocalist slot since Helix formed in 1974 and he continues to bring the rock to this day.

Starting as a cover band, they sharpened their skills playing every run down, flea infested beer bar that Canada had to offer. Travelling around Canada isn’t for the feint of heart, and in the winter it’s completely insane. Helix got out there and earned their fans one at a time playing LIVE (the way music is supposed to be played unlike all the sampled, lip synched garbage of today) in some of the harshest environments out there.

After releasing two independent albums 1979’s “Breaking Loose” and 1981’s “White Lace and Black Leather” and the constant touring schedule the band eventually had a major label deal with Capital Records. (Even though they had been turned down 3 times before from the same label)

The next five albums could be considered the “Glory Years” for the boys in Helix. The lineup stabilized and now comprised of the aforementioned Brian Vollmer on vocals, Brent “Doctor Doerner” on Guitar, Paul Hackman on Guitar, Daryl Grey on Bass and Greg “Fritz” Hinz on Drums. This lineup would remain intact for the next four albums as Helix set out touring with the likes of Kiss, Rush, Quiet Riot, Aerosmith, Whitesnake, Motorhead and others.

A brief highlight of the Glory Years include,

1983’s “No Rest for the Wicked” featured the infectious single “Heavy Metal Love”. A classic tune that stands the test of time and is still a live fan favourite. 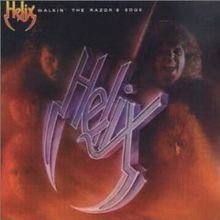 1984’s “Walking the Razor’s Edge” album would be considered the breakthrough album. Featuring the hits “Rock You” and a cover of Foot in Cold Water’s “Make Me Do Anything You Want”. The band toured extensively headlining theatres in Canada and opening for the likes of Kiss, Rush, Quiet Riot. The band played at Toronto’s CNE stadium on the Heavy Metal Hurricane night, The bill included the Scorpions, Quiet Riot, Helix and Kick Axe. At this point they became a theatre headlining act all through Canada.

1985’s “Long Way to Heaven” album included the hits “Deep Cuts the Knife” and “The Kids Are All Shaken” (of note this album went to number one on the Swedish Charts). The band then opened for Ronnie James Dio again at Toronto’s CNE stadium. They also spent time on tour with Keel and Accept throughout North America. 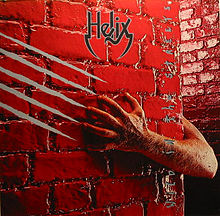 1987’s “Wild in the Streets” included the hit title track as well as a song written by Joe Elliot of Def Leppard “She’s Too Tough” which can also be found on Def Leppards “Retoractive” album. This album also contained a cover of Nazereth’s “Dream On” that became a solid live fan favourite.

By 1990 Brent Doerner had left the band and they continued on as a four piece, but he did contribute with the writing of 1990’s “Back for Another Taste” album. This release featured “Running Wild in the 21st Century” and “The Storm”. This was their last album for Capital records and as the musical tides changed, Helix spent the 90’s dealing with lineup changes, ups and downs, and personal tragedy as guitarist Paul Hackman was killed when the band’s van lost control after a show in Vancouver.

Through it all Brian Vollmer has kept the Helix flame alive, releasing music playing select shows and releasing “Gimme an R”, his autobiography containing great road stories from all the eras of Helix. A great read for those that like a good look into the life of a touring musician.

In 2009 Vollmer regrouped with Doerner, Grey, and “Fritz” and new guitarist Kaleb Duck to release what many would call the “reunion” album “Vegabond Bones”.  The chemistry of this lineup has produced another solid Rock record. This album totally captures the Helix sound and energy of yesteryear. I thoroughly recommend checking it out! After playing Rocklahoma in July 2009 Helix have been playing shows from Coast to Coast in Canada with no stop in sight.

As we close out Vol 2 of  Hoser Heavy Metal. I decided to leave you with my personal “Essential Helix” Playlist. It includes some hits and some deep cuts, check em out and let me know what you think…

1. “Rock You” from Walkin the Razor’s Edge
2. “Wild in the Streets” from Wild in the Streets
3. “Heavy Metal Love” from No Rest for the Wicked
4. “The Storm” from Back for Another Taste
5. “Dirty Dog” from No Rest for the Wicked
6. “Long Way to Heaven” from Long Way to Heaven
7. “Hung Over but Still Hangin In” from Vegabond Blues (with Russ Dwarf)
8. “Billy Oxygen” from Breakin Loose (note this one might be tough to find remember it was 1979)
9. “Make Me Do Anything You Want” from Walkin the Razor’s Edge

For those in the Toronto area you can catch them Friday April 27th, 2012 at the Rockpile in Etobicoke. I will be there!