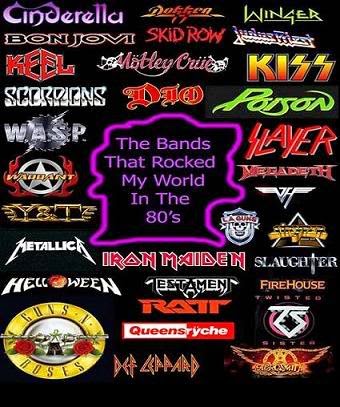 No matter what form of metal or rock that you are a fan of, you can’t deny the 80’s was a momentous time. To be transported back to that era, would be a trip, I think most nostalgic rockers would happily take.  For myself growing up, rock music was a daily part of my diet, it was fully immersed in my bloodstream. AC/DC, Whitesnake, Deep Purple, Def Leppard and UFO were regularly blasted in my parents dining room.  Nothing else mattered, except standing in front of the mirror with the air guitar hung low.

When American glam metal started emerging with bands like Motley Crue, Ratt and Quiet Riot, MTV took notice, and the whole scene went into overdrive.  Sunset Strip, Los Angeles, became a mecca for up and coming bands dreaming of the big time.  It became a decade of pure debauchery and extreme decadence, too much was never enough.  Sales of hairspray and spandex went through the roof.  In fact hair was so big it needed planning permission, while cucumber smuggling almost became a national sport.

But it wasn’t all about the glam, established metal acts like Iron Maiden, Judas Priest and Scorpians continued to pack arenas out across the states. Thrash metal was also on the up, with heavyweights like Metallica, Anthrax and Slayer.
But not everybody was a fan.  Former second lady, Tipper Gore, formed a committee in 1985 called the Parents Music Resource Centre (PMRC).  It’s main goal was to increase parental control over access to music which was seen to glorify drug abuse, sexual violence and anarchy.  They even published the famous Filthy Fifteen, a list of songs deemed to have inappropriate content.  Needless to say over fifty per cent were rock bands.

Those included were Twisted Sister We’re Not Gonna Take It, Judas Priest Eat Me Alive, Motley Crue Bastard and W.A.S.P ANIMAL(FUCK LIKE A BEAST).  They also succeeded in having record companies put “Parental Guidance: Explict Lyrics” labels on albums, which became known as the Tipper Sticker. However this only had a positive impact on the metal market, record sales shot up.  Towards the end of the 80’s rock was never bigger.  Guns N’ Roses were ripping it up with their iconic debut, Appetite For Destruction, Def  Leppard were shifting truckloads of their comeback album Hysteria and David Coverdale‘s Whitesnake were reborn with 1987.

But by the early 90’s the golden era of rock was nearing an end and a new movement was emerging.  Yes folks, good old Grunge, the complete antithesis of 80’s rock.  It arrived like the Grim Reaper in a flannel shirt, scythe in hand, and more or less massacred any rock band with a hint of melody.
Nirvana, Soundgarden, Pearl Jam and Alice In Chains led the movement, while the rest were just poor imitations who looked twice as miserable and hated their mother more.  I approached Grunge with a open mind and bought Pearl Jam‘s Ten album.  The whole thing left me cold.  I felt no urge to throw a few shapes and release the dandruff.  Instead I found myself staring at the wall, wondering whether to smash my head against it.

Last year my wife won tickets to Soundgarden in Dublin, and seeing as I was older and a little bit wiser I went along, once again open minded.  There was no big sounding opener, instead we were greeted with something that probably gave the Grunge faithful a joyous feeling of impending doom.  My friend, who I dragged along, was ready to bottle them after the second song.  And to top it off, their massive hit, Black Hole Sun, wasn’t played – even as an encore.  No instead we got ten minutes of mind bending misery, with bassist Ben Shepherd and guitarist Kim Thayall giving us a crash course in distortion.  But all bad things must come to an end and by the late 90’s the movement was more or less over.

Thankfully the same cannot be said for rock.  Their flame may have been dimly lit, but it has never been put out.  Because unlike Grunge, rock music is not a fad, it’s a way of life, it’s a tradition.  Plus us rock fans are loyal.  We have got married, bald, fat and pregnant with our bands, and have never missed the chance to devil horn the night away.  Bands like Poison, Warrant and Stryper, who suffered badly in the 90’s, are back and loving it.  Rock royalty like AC/DC, Iron Maiden and Metallica are bigger than ever.  Kiss and Def Leppard have joined forces this summer for a North American tour.  Motley Crue are on what could be a 5 year farewell tour, and Judas Priest released the metal album of the year with Redeemer Of Souls.

Although metal, trash and glam hav
e always been the enemy of the critics, it still remains the most loved and revered form of music ever.  Where else would you get anthems as memorable Here I Go Again, Photograph, Run To The Hills, Master Of Puppets, Back In Black, Crazy Crazy Nights, Shot In The Dark, Shout At The Devil, Raining Blood, Wanted Dead Or Alive – the list is endless.  I remember hearing these songs for the first time and being totally seduced by their power, melody and downright brashness.  We probably won’t see the likes of these bands again, but they’ve left a permanent imprint on a lot of peoples lives, mine included.  I wanna go back.  Are you ready…….everybody in the hot tub.