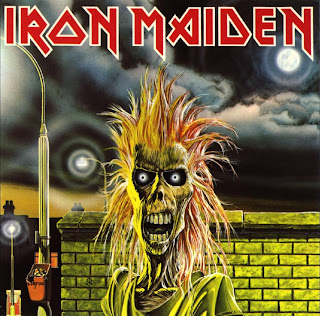 The relationship between metal and punk has always been contentious. The first wave of bands that fell under the heavy metal umbrella are often cited as having been ushered out not by the next generation of headbangers, but by punk rock.
Being born years after the fact, I can only speculate that the simplicity and ferocity of punk rock must have struck a chord in the hearts and minds of those dis-interested in the lengthy drum solos and jazzy jams that many metal and hard rock bands were evolving into. Put simply, punk rock wasn’t about building on the established – it was about tearing it down, and starting again.
However, the history of music is never linear, and just as punk was destroying metal’s position in the mainstream, the next generation of metal bands were already beginning their crusade. All in one year, The Sex Pistols, Motörhead, and NWOBHM’s champions Iron Maiden were formed, but it took the latter a few years to find their feet.
By the time of Maiden’s debut, the fusion of punk and metal wasn’t completely unheard of. Motörhead perhaps embodied the concept, and lay out the blue-print for the likes of Venom, Tank and Warfare. However, many of the metallic elements that the first wave of metal bands had to offer were stripped back  in favor of a balls-out approach. This was all about to change when punk rock singer Paul Dianno was drafted into the Iron Maiden fold.
With Dianno behind the mic, Maiden’s blend of The Who, Deep Purple and Yes was injected with a dose of unpolished, raw tenacity. The sound on Maiden’s debut was abrasive and coarse, but unmistakably metal. Stratton and Murray’s guitar harmonies litter the album, forging a criss-cross of spider-webs throughout. The late Clive Burr’s shuffling, head-shaking drum beats stand-out on the record to this day, with himself and Steve Harris’ bass lines forming a crucial part of the albums make-up, especially on tracks like Running Free, possibly one of the best Iron Maiden songs recorded.
Curiously, the self-titled stands out as a unique entity within the Maiden chronology, less representative of the legacy the band would forge (Killers marking the appearance of a lot of the band’s trademarks), and more so of the bands they would inspire, at least in the immediate. The sound of NWOBHM is encapsulated in the album – dancing between the boundaries of prog, melody and attitude all at the same time. Whereas you might want to look to Venom for the origin point of extreme metal, Maiden are definitely a turning stone for the more melodic side of things.
Burr would go on to appear on two more Maiden records, Dianno would cut one more, and this marks Stratton’s only album with the band, but the songs continue to resonate to this day. Whilst Prowler and Sanctuary may not have had the lasting-power as cuts from other Maiden albums, they still remain enjoyable. The majority of this album is classic – Charlotte The Harlot and Remember Tomorrowdisplaying the bands range, whilst Transylvania and The Phantom Of The Opera allowing the band to show off their chops. Of course, the most enduring moment of the record comes in the form of Maiden’s self-titled anthem, the chorus sounding a warning to headbangers everywhere that Iron Maiden make good on to this day – Wherever you are, Iron Maiden’s gonna get you, no matter how far!