A couple of weeks back it was my birthday. I had the extreme pleasure of spending “Meister Day” (also “Wallygator Day” and “CGCM Day” among others) in a foreign country. A country that I love and am actually planning a move to in the future. And what a better way to spend a birthday than with amazing friends and lovely ladies? Welcome to my birthday blog featuring The IRON MAIDENS in Stockholm.

In Stockholm, Sweden I began my day late. Very late after being up a good portion of the night before (no more details need be given

). Meeting my good friend Anders downtown after he finished work, we made our way over to Crazy Horse Bar. Targeting 4 pm to meet with my friend Chris Laney (Pretty Maids/Laney’s Legion) and his lovely wife, we proceeded to consume several adult beverages. Mr. Laney regaled us with some stories of bands and tours and the mood was joyous. We even snapped a quick pic for our good friend Mike Belanger back home as Chris and I enjoyed red wine. 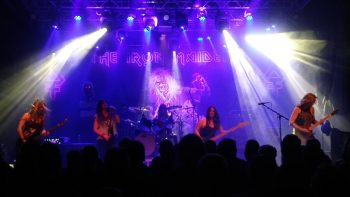 Before long it was time to make our way to The Iron Maidens show. Saying our farewells, we moved on from Crazy Horse. Arriving at Fryshuset Klubben and meeting Tomer outside, we entered the club just a few moments before The Maidens took the stage. Beer in hand, we made our way closer to the front of the stage as the intro music began (UFO‘s “Doctor, Doctor”). Fantastic to see my Monsters of Rock Cruise pal Cem in the crowd. Music is the great uniter and here we go again! The Iron Maidens have been part of MORC for a few times now and here in Sweden we have the band plus at least 4 cruisers that I know of (including me)! 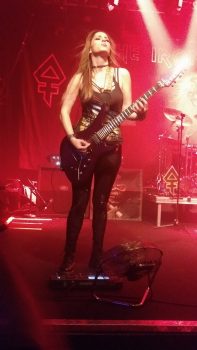 As I fully expected the ladies of The Iron Maidens, Kirsten Rosenberg (vocals-Bruce Chickinson), Linda McDonald (drums-Nikki McBurrain), Wanda Ortiz (bass-Steph Harris), Courtney Cox (guitar-Adriana Smith), Nikki Stringfield (guitar-Davina Murray) ripped another blistering set. These girls really do have the chops and Rosenberg really does have a Bruce Dickinson sound. And they often play deep cuts, ones that Maiden will never play. For me this night the big highlight was “Die with Your Boots On” from my favourite Maiden release, Piece of Mind. Now if one time, just one time I could get “Sun and Steel”…lol.

Now, let’s be honest here. It was my birthday and based on that I will make no promises of sobriety or memory on setlists. The (not necessarily accurate) setlist.fm does have a setlist posted and it seems reasonably correct, based on my beer addled memory. Here’s what I can promise. I had a truly amazing time and these ladies can really play some Maiden! After the show, we clamoured around the merch table. Securing t-shirts to commemorate the occasion, I got a pic with Nikki followed by the entire band. Kick some Euro ass on this tour ladies and probably see you next year on Monsters of Rock Cruise I hope :). 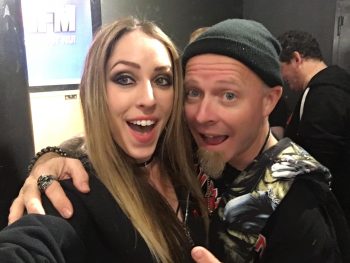 As we were “suggested” to get the hell out of Fryshuset Klubben by the security staff and it was still quite early we were off to Pub Anchor to catch Adam Bomb. Not super familiar with Adam Bomb, I’ve done a little research since. But by that point in the evening, I was well on my way to having outdone myself with the drinks. I recall enjoying the sounds I heard from the stage courtesy of Adam Bomb but was unable to continue. I took my leave rather soon into the gig.

All in all an excellent birthday celebration! Super thanks to all my friends who shared the evening or even a part of the entire trip with me. Extra special thanks go to Anders Mars, who not only put up with me in his home and bought metal beers (Motorhead and Wolf) to drink but went way out of his way to have the bakery down the street bake me a “Canadian” cake. He woke me up singing “Happy Birthday” and presenting the cake that morning. Thanks, dude, I’m literally overwhelmed.

Watch for my email interview with Nikki Stringfield coming soon to the CGCM Podcast Website!