German power metallers Iron Savior may not be the most widely known or recognized name in North America. But that’s a grievous oversight on us all! For those not in the know already, Iron Savior began over 20 years ago! The band formed in 1996 in Hamburg, Germany. While today Piet Sielck remains the sole original, the first incarnations included the likes of Kai Hansen (Helloween/Gamma Ray) and Thomen Stauch (Blind Guardian). With that comes a musical catalog containing ten full-length albums and more! And in addition, they now add IRON SAVIOR – Kill or Get Killed to the ranks!

According to info found on Wikipedia: The band’s debut album Iron Savior introduced the story that would be told over the course of multiple albums, featuring a self-aware space vessel called the Iron Savior and its relationship to the mythical lost civilization of Atlantis.

Meanwhile, for IRON SAVIOR – Kill or Get Killed, the artwork and the lyrics seem unusually grim in contrast to the earlier concept albums is no coincidence, says the press release. “We just were up for something new, and I was inspired by the book The Star of Pandora, a sci-fi novel about the destruction of humanity by an alien civilization,” explains Piet. 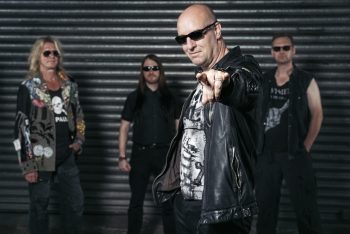 After that, we dive into my personal favorite on Kill or Get Killed in “Roaring Thunder”. The opening riff is simply larger than life! Certainly, exactly what I love from Iron Savior!

“Eternal Quest”, initially released as an audio single, precedes “From Dust and Rubble”. Both keep flying the flag of ripping Power Metal strong and true. Take a look and a listen to the spontaneously thrown together video for “Stand Up and Fight” also available below. I actually laughed out loud watching this!

Apparently, Iron Savior kept pretty faithfully to their established formula here on Kill or Get Killed. However, there’s nothing bad about that at all! The whole collection features the staples probably most widely known in their flagship anthem “Heavy Metal Never Dies” taken from the 2011 released The Landing. Relentless and powerful, from the first note through the last guitar riff, this album does not let up or disappoint. In short, it’s time you took a leap into the high-quality Power Metal of Iron Savior today!