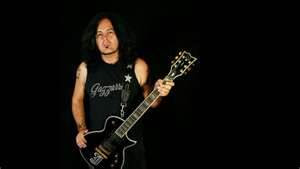 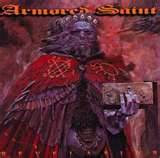 This week on The Decibel Geek Podcast the Year 2000 In Review (Part 1), Aaron and Chris mentioned Jeff Duncan and Armored Saint and they featured the track After Me, the Flood, from the 2000 album, Revelation.  Jeff Duncan had joined Armored Saint as a second guitarist in 1989, shortly after the release of the live offering Saints Will Conquer.  Jeff first appeared on the 1991 release Symbol of Salvation which received critical success and was dedicated to the memory of David Prichard, original guitarist who succumbed to leukemia prior to its recording.  The record produced the hits Reign of Fire and Last Train Home.  A year later the band appeared in a cameo in the movie Hellraiser III: Hell on Earth and also contributed a song to the movie’s soundtrack album.  The band disbanded following this as vocalist John Bush, who ten years earlier had been offered the vocalist spot in new band Metallica, accepted the vocalist position in Anthrax. Bassist Joey Vera joined the progressive metal band Fate’s Warning in 1996.  He has appeared 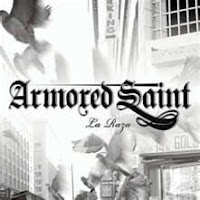 on the Lizzy Borden records Master of Disguisefrom 1989, Deal with the Devil from 2000 and also put out a solo album entitled A Thousand Faces.  In 2004 he joined John Bush in Anthrax on a temporary basis.  During a break from Anthrax in 1999 Bush and Vera decide to resurrect Armored Saint.  The entire line-up returned and the product was 2000’s release of Revelation.  The following year they released Nod to the Old School which featured many demos and outtakes from the years.  With Bush and Vera again leaving Anthrax, Armored Saint again reformed and recorded the 2010 album La Raza. 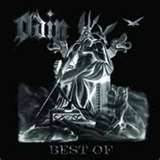 Prior to joining Armored Saint Jeff was a founding member of the club scene band Odin.  I had never heard of Odin until I signed on to cruise the high seas last year on the inaugural Monsters of Rock Cruise.  I was excited about the cruise and seeing some bands that I’d been waiting all my life to see (over dramatic?  I don’t think so….lol), so I tried to learn about the bands that I was unfamiliar with.  Odin was one of these bands.  I started by ordering the Best of Odinfrom Perris Records without hearing a track and was pleasantly surprised.  It quickly took over my MP3 player playlist with songs like 12 O’clock High, Push and Don’t Take No for an Answer.  They quickly became one of the bands that I was looking forward to seeing aboard the MSC Poesia Cruise Ship.  When the schedule was released for the cruise and set times for all the bands I found Odin to be only making one appearance in an afternoon slot at 2:30PM while we the ship was in the port of Nassau, Bahamas.  I arranged my schedule and made sure to catch their performance.  Sadly (but great for me….lol), there were only a smattering of the 2500 cruisers in attendance to watch Odin’s set 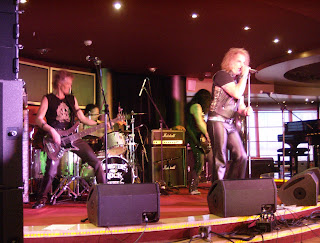 that day.  They put on an excellent show running through a set list of all their hits like 12 O’clock High, Over Your Head, One Day to Live, Time & Time Again, She Was The One, Little Gypsy, Matter of Time, Solar Eye, Judgement Day, Don’t Take No For An Answer and Shinning Love and were available for autographs after the show.  Randy O’s screeching vocals had not diminished at all over the years and they sounded tight and clear in the Pigalle Lounge that afternoon.  Jeff Duncan handles guitar duties, while his brother Shawn Duncan on drums and Aaron Samson with the bass guitar.  Check out their facebook page here: https://www.facebook.com/pages/Odin/77888031676 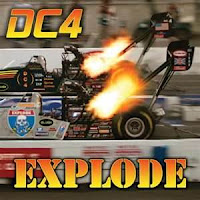 Encouraged by my new found success with Odin’s recording, I searched out another “new to me” band that would be performing on the cruise in DC4.  DC4 consists of all three of the brothers Jeff, Shawn and Matt.  In this outfit Jeff handles not only the guitar, but steps into the vocalists’ shoes as well while Shawn sits behind the drum set, Matt plays bass guitar.  The family are joined by guitarist Rowan Robertson.  I purchased DC4’s 2007 CD Explode from a hated download site (I prefer hardcopy material with liner notes and you never know if the band actually sees the money from the sale) and gave it a listen.  Excellent discovery again!!  Their brand of pumping, driving, “megarock” soldiered through tracks like Candy Caine, God Complex and Rock & Roll Disease.  Again, like Odin, they only had one time slot on the ship (most bands were playing two sets) and I made sure not to miss it at 2PM in the very “trippy” Zebra lounge during the stop in the port of Key West Florida.  Stryper was also slated to play at the same time as DC4 on another stage, but due to a snowstorm back home, they were delayed and late catching up and boarding the ship.  Due to this Styper reschedule, many people chose to take advantage of the
, but some wandered into the Zebra lounge to catch this rock act that they had never heard of.  Several cruisers made comments to the effect of “What’s a Sunday without Stryper?”  After DC4’s set, the comments had changed to “DC4 saved our Sunday” as the guys rocked through their set list and gave away 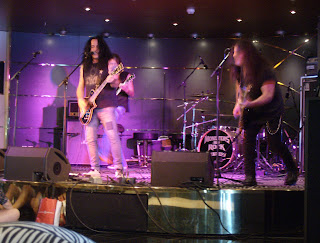 a few CD’s to select audience members.  In a brief conversation with bassist Matt Duncan after the set, he told me that they were shocked at the reaction and certainly didn’t expect this kind of crowd to catch their set.  I was hoping to purchase their Electric MinistryCD or even the Explode hard copy and obtain an autograph, but they didn’t have any left for sale.  They gained a new audience that day and I have seen some fellow cruisers showing their support of DC4 on the facebook page at: https://www.facebook.com/DC4HardRock?fref=ts  I hope this band continues to create and release new music and they have been an excellent discovery and addition to my library. 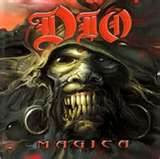 Chris and Aaron also mentioned Dio’s 2000 CD, Magicaand featured the track Fever Dreams, which is a re-recording originally found on Dream Evil from 1987.  The guys mentioned that Magica marked the return of guitarist Craig Goldy to Dio’s line up.  During Craig Goldy’s hiatus from Dio, the aforementioned Rowan Robertson from DC4 was chosen to join the band from over 5000 guitarists when he was just 18 years old!  Rowan’s only release with Dio was 1990’s Lock up the Wolves as after this record Ronnie Jamed Dio reunited with Black Sabbath, resulting in 1992’s Dehumanizer.  Although he was working with Ronnie on a follow-up album to Lock Up The Wolves, Rowan has said that he does not feel comfortable releasing any of these rehearsal recordings to the public without the permission of Ronnie James Dio himself.
I hope that you’ll look into some great rock from an excellent guitarist, Jeff Duncan.