League of Rock – "I Loved The Shine!" 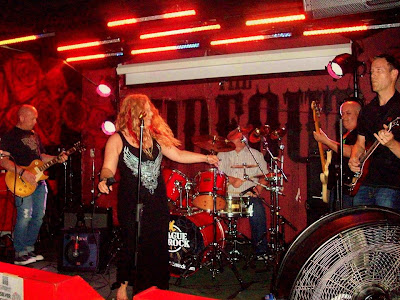 So as I write this, I am riding the Toronto Subway home from the Hideout. The Hideout is a live music club here in downtown Toronto. Now most often I would be writing up a review of a band that I just witnessed but tonight was a little different.

For those that have been following along with my league of Rock series, you already know that I am now halfway through on this most interesting experience, living the dream of being in a rock n roll band.

So tonight after four weeks spent in the bunkers of the Rehearsal Factory, we geared up for our very first “performance” playing in front of people. All five bands that make up this session of the League of Rock were scheduled to play their set, live without a net in a real rock n roll bar. Wow, the training wheels are really off now!

Feeling some major butterflies I headed down to the club early for some dinner and a cold glass of courage. Since I most certainly can’t review my own show, my esteemed Decibel Geek colleague and good friend Rich Dillon joined me for support and quite possibly to heckle my band.

Before long the club was filling up with fellow League members lugging guitars cases ready to rock. I have to say, the excitement turned to nervousness and as I waited I had fears of forgetting our songs. “How do we start?, how do we end?, fear was certainly an emotion I was dealing with. Rich laughed as I ordered a plain coke because I was drinking faster out of sheer nervousness and figured that guzzling alcohol might not be the best idea for me. 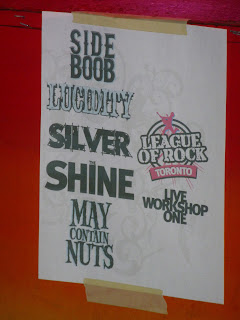 My band mates arrived and soon the club was buzzing with League Members and lots of guitar cases lined the walls. Before long the order sheet of which band was going on and when was posted. Part of me wanted to be first to get it over with, the thought of more time for my nerves to boil over wasn’t comforting but maybe seeing some of the other bands might relax me or at least take my mind off things. Reading the sheet, we were the fourth band on the list. So I finished my coke (that’s cola! Geesh, it’s not 1988!) and ordered a cold beer.

Watching the other bands was probably a good thing. All played great, some really good song choices. This gave me  time to be a music fan instead of a shaking mass of nerves. You could see that others were nervous too but they soldiered on and played great. When the first band broke into Pat Travers’  “Gimme Three Steps”, I rocked out. Great song choice!

The second band up, Lucidity had me rocking with some Black Crowes that sounded great. These bands had worked hard to be as solid as they could for our first show. This was fun!

We got news that one of the bands weren’t able to make it and that we were up next! This got the adrenaline pumping as I grabbed my gear and headed for the stage. This was very different than the rehearsal factory, within moments I gave our drummer Jim a look that hopefully hid I was crapping my pants and Scott ripped off the intro to Wildflower on his Gibson SG and four bars later The Shine kicked in and my mind was racing. 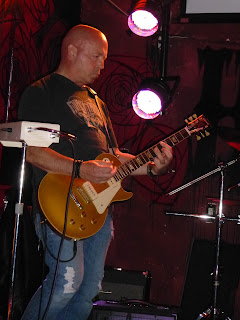 A combination of adrenaline, euphoria and nervousness flowed through my body. It was a strange sensation as flashes of panic and doubt were balanced with a complete rush of excitement. One moment I would be nervously counting the bars making sure I wasn’t missing a change and other times I got lost in the song as we caught a groove. It was intoxicating.

Did we play a flawless set? Not a chance, I know I sure missed some notes here and there, cringing when I did but we made it through unscathed. In fact, I feel we did a pretty solid job and in the words of John Mellencamp (when he still carried the “Cougar” monicker) it was “close enough for rock n roll”!

In the blink of an eye it was over, I unplugged my bass and realized I was still trembling from all the adrenaline still coursing through my veins. We were instructed to follow our coach to the back room for a “band flogging” from Mr. Colin Cripps. Colin, a guitar player/songwriter/producer has worked with the likes of Bryan Adams, Junkhouse, The Headstones and Crash Vegas. 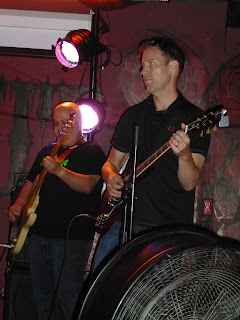 Colin gave us some great feedback telling us what to work on during our next practice session and he strongly recommended the song he felt was the one we should take into the recording studio on week nine. ACDC’s “Whole Lotta Rosie”, was his pick and his reason was that according to him we had made that song our own. We still need to polish it more, get it tighter for the next showcase which is our next focus.

From there we went out to enjoy the last few moments of the final band and finally relax and take a breath. As I shared another cold beverage with Rich, the highlight of my night occurred.  Tony Springer walked over to me and said “I loved The Shine!”. For those that have never experienced Wild T and the Spirit, go look them up. Tony is a monster on the guitar and I am a big fan. Surreal? F’ ya!

Check out some Wild T here!