League of Rock – Live at the Brooklynn Bar! 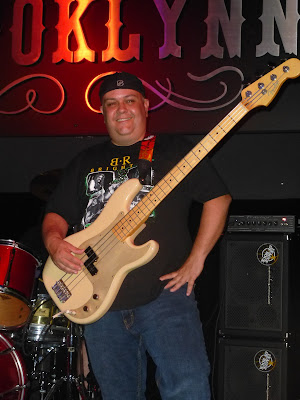 Welcome back to my own personal “Rock Star” journey as I continue through the League of Rock. Week 7 takes us back downtown Toronto, this time to the Brooklynn Bar on Queen St. for our second live workshop.

Once again all five bands get to play their mini-set in a real rock bar, live without a net in front of an audience. This time around I felt confident enough to bring along some support in the shape of my family to come and witness the rock n roll circus. 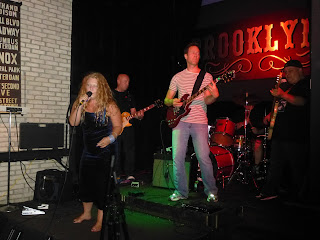 We arrived at the club and headed inside only to see the poster indicating the order of tonight’s bands. With nerves a little on edge I noticed we were up last out of the five bands. This gave me time to relax, enjoy all the other bands and of course get more nervous. Knowing more of what to expect this time, the nerves weren’t quite as bad. At least I wasn’t physically shaking this time around, but as I waited for our turn my mind still raced “How do we begin Whole Lotta Rosie?”, “How do we end Whole Lotta Love?” and “Oh my god!, I forget everything!” 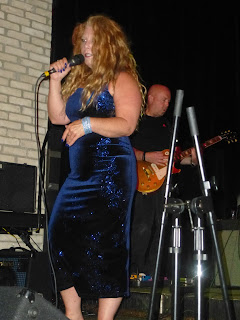 I noticed the progression of all the bands that played before us, everyone of them were leaps and bounds better than our previous workshop. Confidence and experience makes all the difference and all the bands were transforming as the showmanship was certainly raised to another level this week.

The coaches this week were guitarist Eric Shenkman (Spin Doctors) and drummer Jim McCarty (The Yardbirds). After each band wrapped up their set, the coaching duo would spend a few moments to provide some feedback for each of the bands. I have to say it was more than a little weird knowing that I would be playing a Led Zeppelin song in front of Jim McCarty who shared the stage with the Jimmy Page. 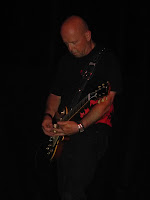 I thoroughly enjoyed rocking out to all the other bands, maybe going on last isn’t so bad as I actually got more inspired and pumped up as each band went on. Before long the fourth band had wrapped up and I headed back to grab my bass, it was showtime for The Shine.

Terry Moshenberg introduced us and Scott dove into the guitar intro for the Cult’s “Wildflower”, this time with just a little more attitude and snarl. The band kicked in and we were rocking. Our previous workshop I was so nervous about missing a change or screwing up the song that I played it safe not moving too much always watching my band mates for ques and changes. This time I soaked it in, I had more room to move on stage and I made eye contact with the audience. It was electric! 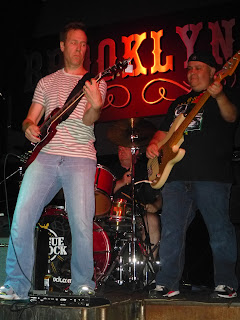 We were halfway through the first song just about time for the guitar solo when disaster struck (or so I thought). Suddenly my bass cut out, puzzled I looked down and realized my pedal was no longer lit up. Thinking fast I dropped to my knee and noticed the AC plug had come out of the power socket, quickly plugging it back in I was back and playing just as the next change in the song kicked in. That got my heart racing! For a moment I was beating myself up but we soldiered on and I didn’t realize that since it happened right at the guitar solo and I was back in right at the end of it, people didn’t even realize it had happened. The audience was still with us. 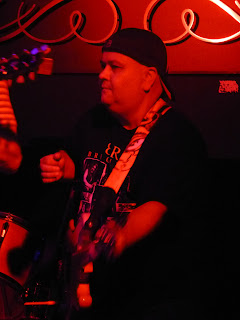 Rearranging our set Led Zeppelin’s “Whole Lotta Love” was up next and the groove on this song is so much fun to play. Laurie’s vocals produce goosebumps every time, and John’s slide guitar was especially tasty. I noticed some of the audience were actually rocking out with us (OK, some of them might have been my family but still!) and I can’t remember ever having more fun than at that exact moment.

The high energy of ACDC’s “Whole Lotta Rosie” would end our set and it felt great. Parts of the song that have been giving us problems seemed to disappear for once. Jim nailed the shots on the chorus and I think it was the tightest we had ever played the song thus far. If not it was certainly the most fum I have had playing it. As it built to the big energetic rock and roll ending the electricity felt so good, this could certainly be addictive and i can see why some of my band mates have been repeat League of Rock members. With only two weeks left to go, I don’t want it to end.

Post Note: We received our share of coaching and feedback from both coaches and to hear Jim McCarty of the freaking YARDBIRDS! say “great bass playing” I had to pick my jaw up off the floor. My band mates have carried me every step of the way, they have taught this rookie how to be in a band and for that I will be forever grateful and I am having a blast!!!!